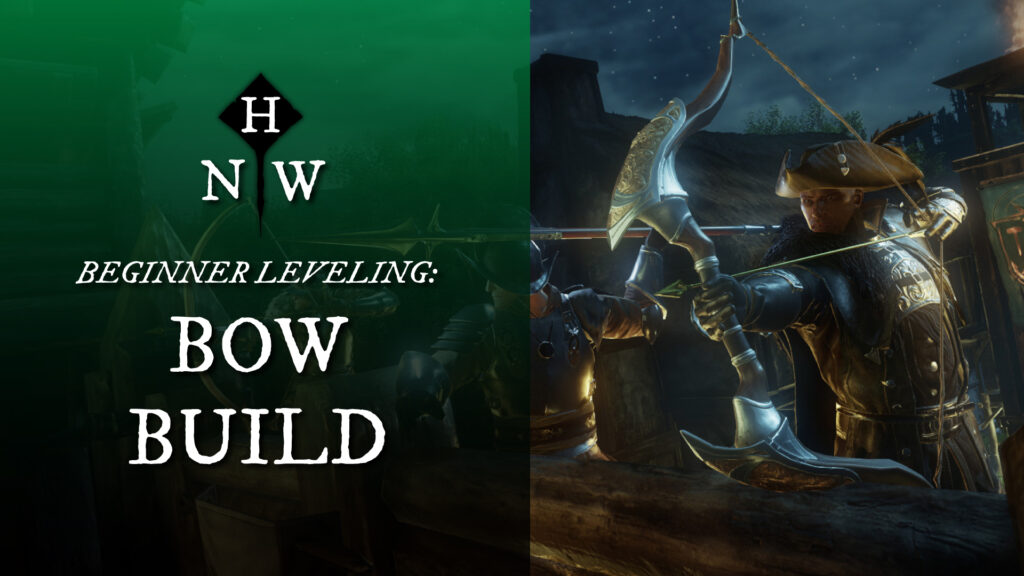 The bow is a high single target damage weapon capable of annihilating many enemies in a single charged heavy shot when only a few isolated passives have been acquired. With abilities like Evade Shot, Rapid Shot, and Penetrating Shot, the bow becomes capable of destroying many enemies in quick fashion. Although the bow lacks hard crowd control abilities, its sheer power 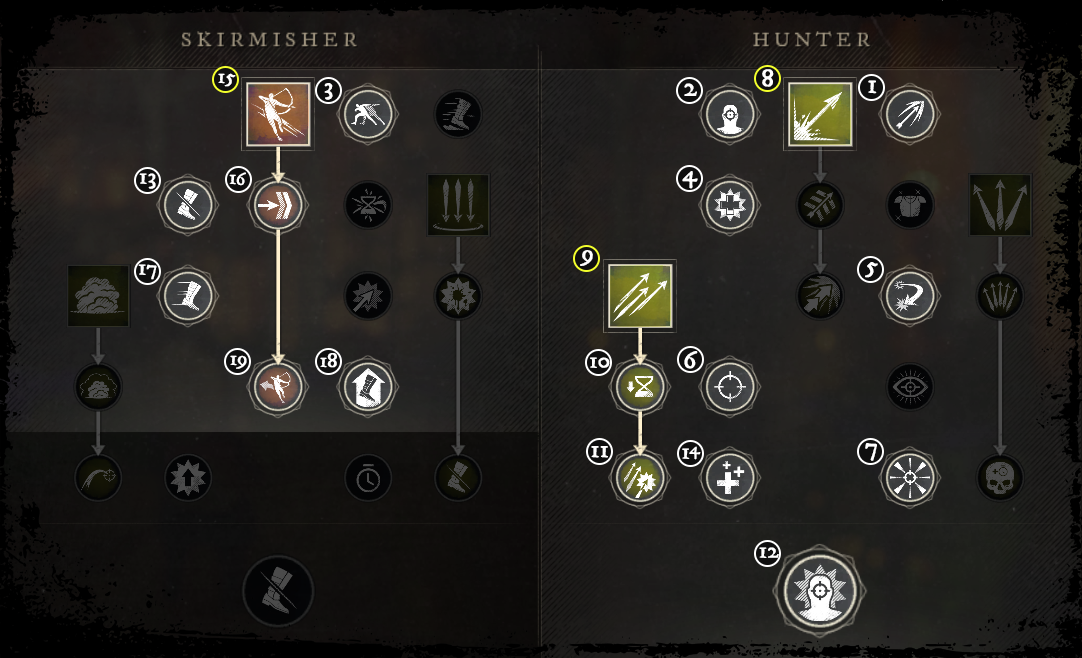 Evade Shot is an ability that allows a player to easily create space between themselves and their opponent. This is important in leveling to help mitigate the damage that a player takes while questing in Aeternum. The Evade Shot arrow is also relatively easy to hit, giving new and experienced players some extra forgiveness while monsters are moving erratically.

Evasive Knockback and Go The Distance are both decent enough passives to take in this build. Although these passives do not boost the power level of the bow by a significant amount, they do improve the quality of life presented by Evade Shot. Because these passives do not affect a player’s experience significantly, they are taken towards the end of the bow mastery leveling experience.

Penetrating Shot is a hard hitting arrow that can be fired rapidly, giving bow users the opportunity to expand their monster killing tool kit. When used to cancel light and heavy attacks, Penetrating Shot becomes one of the bows’ more versatile and powerful abilities. With a well placed Penetrating Shot head shot, most monsters will be eliminated instantly.

Both the Blood Soaked Arrow and Deep Strike passives are far too situational to consider for this leveling build. Not only will a player have a hard time lining up multiple enemies to take advantage of Blood Soaked Arrow, Deep Strike’s distance requirement will staunch its power universally.

Rapid Shot has the highest damage per second potential of any ability in New World. Players will be looking to use Rapid Shot to take down tougher creatures in the open-world as well as using the ability as another means of eliminating regular monsters quickly.

Passive Final Blow is incredibly powerful, giving the most forgiving Rapid Shot arrow (3rd) an increase in damage. Rapid Accuracy is a valuable passive, especially when fighting stronger monsters. However, against a majority of the monsters that a player will encounter, Rapid Accuracy could lose some value due to the limit of monsters’ difficulty and health.

This particular leveling build focuses on the one-shot kill potential of the long draw (heavy attack) bow headshot. Because a long draw may not instantly eliminate all enemies, it is important for bow users to have abilities like Evade Shot, Rapid Shot, and Penetrating Shot  to assist them in taking town harder monsters and multiple monsters at a time. The first 6 bow mastery points help to develop the one-shot build fairly quickly, grabbing important pieces to the combo like Aim True, Long Range, Opening Strike, Surprise Attack, and Evasive Tactics. After taking Concussion at mastery level 13, the combo will be complete and the bow user should be able to take down most enemies in a single shot. Keys to doing the most damage possible:

Long Range: Increases damage of the one-shot arrow by 20%. The player will need to always be at least 10 meters from their opponent.

Surprise Attack: Amplifies damage of the one-shot arrow by 20% if the player waits 10 seconds between each shot.

Evasive Tactics: Before a one-shot arrow is attempted, the player will need to dodge to boost their damage by 20%

Concussion: One-shot arrows will always be headshots. This passive will give the one-shot arrow 20% extra damage when a headshot is hit.

If used correctly, all 6 passives synergized together will cause a long draw shot to deal an extra 130% damage. With a 170% base weapon damage long draw, the 130% amplification from passives all rolling into a 1.3X headshot multiplier (critical hit), players will be able to take advantage of this incredibly powerful build. 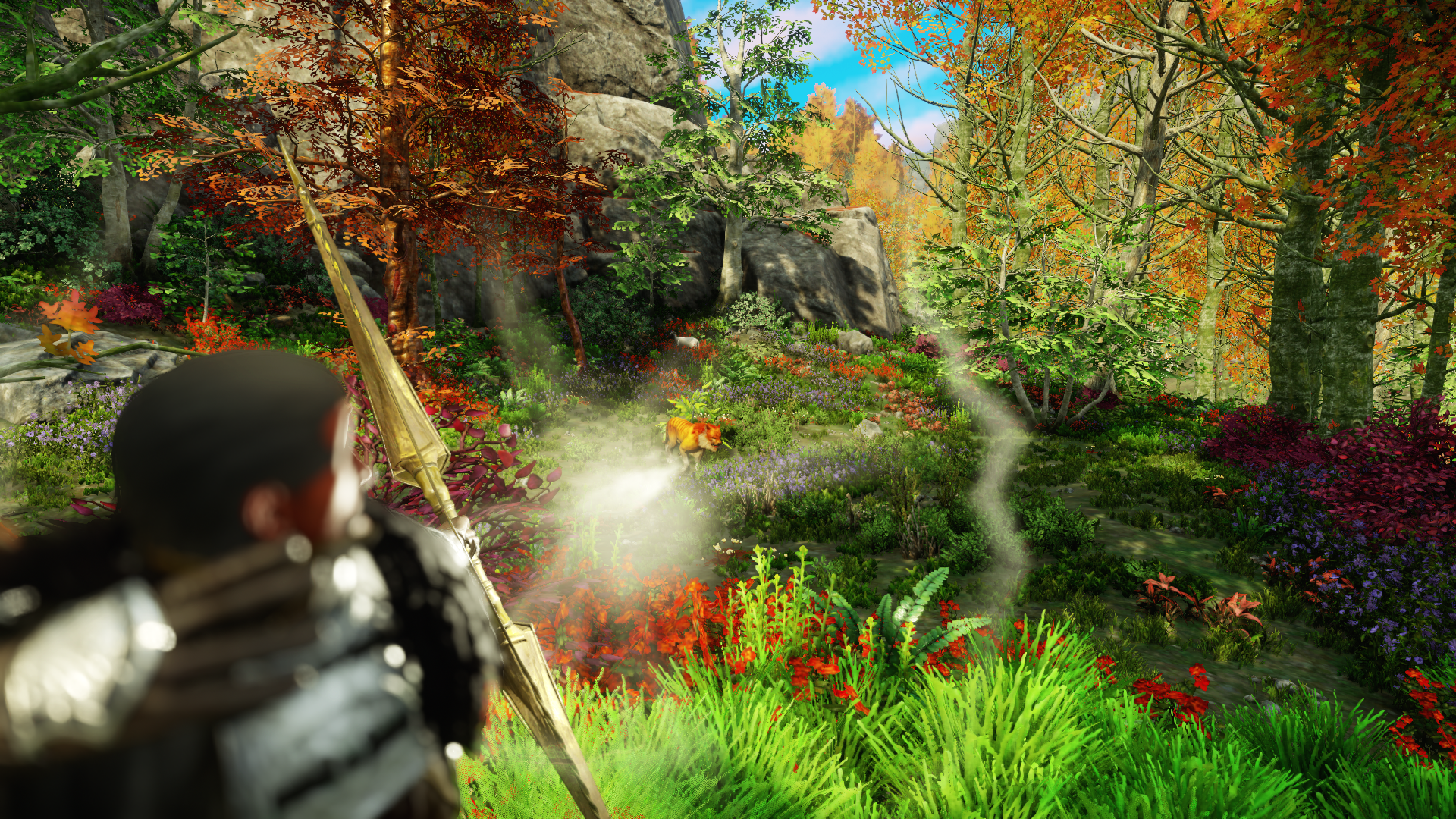 The bow fully scales off of the Dexterity attribute at 1.0X. This means that for every point that a player puts into Dexterity, the bow will gain 1 full weapon damage. The bow is an amazing weapon due to its high power and one-shot kill potential, and for this reason, a player should invest most of their attribute points into Dexterity. The most important Attribute Threshold Bonuses are listed below:

The bow fully scales off of Dexterity, so placing 300 points into the attribute is a no-brainer. Each of the Dexterity attribute bonuses have high value in this build apart from the 250 Dexterity bonus, since we won’t have any stuns, slows or roots in this build and we can’t add any of these effects via weapon ability perks. Because the bow has an impressive kiting tool kit, 350 or even 400 Dexterity could be viable if the bow is paired with another space-creating weapon like the sword, spear, warhammer, etc.

For leveling, bonuses that give cooldown reduction on kills can have a significant impact on a player’s leveling experience in terms of speed and fun. Being able to use hard hitting abilities that may even one-shot enemies more often is great. For this reason, Refreshing Penetrating Shot is the stand-out weapon ability perk among the line-up. While Penetrating Rapid Shot could function well while fighting tougher enemies, the increased damage dealt byway of the armor penetration will be overkill for eliminating most foes.

Post Views: 21,092
We use cookies on our website to give you the most relevant experience by remembering your preferences and repeat visits. By clicking “Accept All”, you consent to the use of ALL the cookies. However, you may visit "Cookie Settings" to provide a controlled consent.
Cookie SettingsAccept All
Manage consent