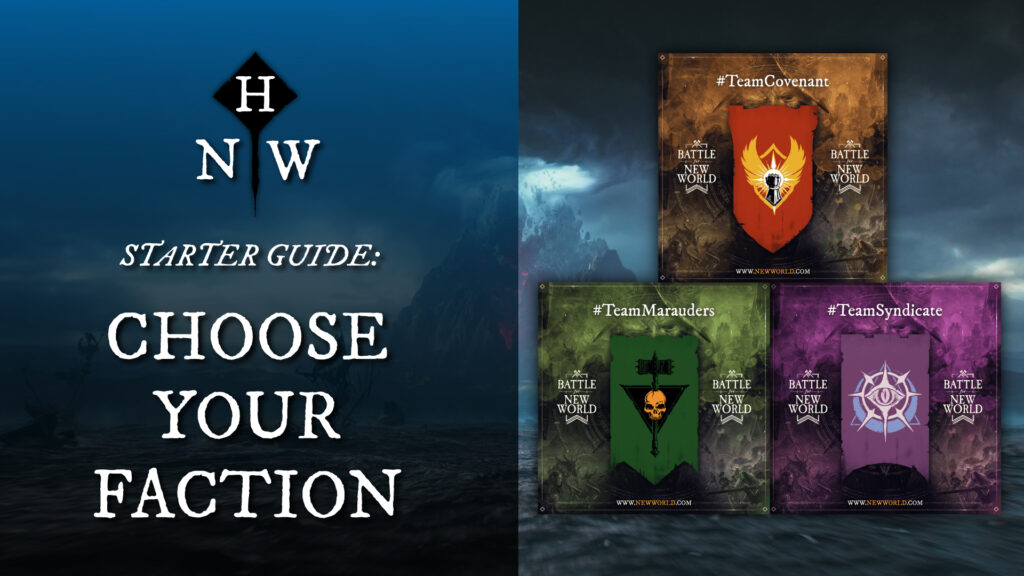 In New World, shortly after arriving at the first settlement, players will be introduced  to the societies of Aeternum. Each of which have their own ideals and plans for control of the Island. The player will be offered a choice, Marauders, Syndicate, or Covenant. These are the Factions of New World. Who will the player aid in the race of arms and war against the opposition? Choose wisely, because once the choice is made, the faction cannot be changed for 120 days.

Within the factions, players may choose to band together ‘Companies’(guild), within those companies a governor(leader) will be chosen.

Companies within the Factions will work together against the opposing factions to gain control of Settlements, and Territories in Aeternum, this is done through war. When controlling a Territory, the governor of the company is tasked with the rate of taxes, and the settlement upgrades that will be implemented first.

“Living examples of the credo ‘might makes right,’ the Marauders are a ruthless military force bent on establishing a free nation where anyone with the strength and determination to stake a claim can do so.”

For those players concerned with aesthetics, the Marauders represent their faction with a green color scheme.

The Syndicate – “Working in the shadows and dealing with secrets, members of the Syndicate use their boundless guile and intellect in pursuit of forbidden knowledge.”

For those players concerned with aesthetics, the Syndicate represents their faction with a purple color scheme.

The Covenant – “Divine champions who are driven by conviction and their faith in the light of the Spark, the Covenant fights with righteousness and justice for the struggling souls of all living things.”

For those players concerned with aesthetics, the Covenant represent their faction with a yellow color scheme.

Advancing Within Your Faction

Each Faction has Faction Quartermasters located in every major city. These representatives will provide players with Faction Missions, Faction Quests to increase their Faction Rank, and spend Faction Tokens to buy their Faction Gear.

As the player completes Faction Missions, the player will accrue Faction Reputation. In order to climb the ranks of a specific faction, a certain amount of notoriety or faction reputation must be acquired. As faction reputation is obtained, it will begin to fill a  Faction Reputation bar. Once this reputation bar has filled and a player has reached a specific character level, the player will be offered a faction quest. When a faction quest is completed  it will increase the level and affiliation that a player has with their specific faction. There are 5 reputation ranks within each faction. Ascending the Faction ranks is important if a player wants to be eligible to  buy higher level Faction Gear, consumables and more.

Faction Tokens are rewarded to a player when they complete faction missions and quests. These tokens act as a resource that can be used to buy ammunition, potions, crafting materials, and more. The largest ticket items within the faction shop are pieces of Faction Gear. The first pieces of Faction Gear can be purchased at level 15 and as a player climbs the ranks within their specific faction and progresses their character level, they will be offered more powerful sets of gear. The final set of faction gear has a requirement of level 60, the maximum level for a character in New World.

Post Views: 2,691
Menu
We use cookies on our website to give you the most relevant experience by remembering your preferences and repeat visits. By clicking “Accept All”, you consent to the use of ALL the cookies. However, you may visit "Cookie Settings" to provide a controlled consent.
Cookie SettingsAccept All
Manage consent

This website uses cookies to improve your experience while you navigate through the website. Out of these, the cookies that are categorized as necessary are stored on your browser as they are essential for the working of basic functionalities of the website. We also use third-party cookies that help us analyze and understand how you use this website. These cookies will be stored in your browser only with your consent. You also have the option to opt-out of these cookies. But opting out of some of these cookies may affect your browsing experience.
Necessary Always Enabled
Necessary cookies are absolutely essential for the website to function properly. These cookies ensure basic functionalities and security features of the website, anonymously.
Functional
Functional cookies help to perform certain functionalities like sharing the content of the website on social media platforms, collect feedbacks, and other third-party features.
Performance
Performance cookies are used to understand and analyze the key performance indexes of the website which helps in delivering a better user experience for the visitors.
Analytics
Analytical cookies are used to understand how visitors interact with the website. These cookies help provide information on metrics the number of visitors, bounce rate, traffic source, etc.
Advertisement
Advertisement cookies are used to provide visitors with relevant ads and marketing campaigns. These cookies track visitors across websites and collect information to provide customized ads.
Others
Other uncategorized cookies are those that are being analyzed and have not been classified into a category as yet.
SAVE & ACCEPT
This website uses cookies to improve your experience. If you continue to use this site, you agree with it.
Ok