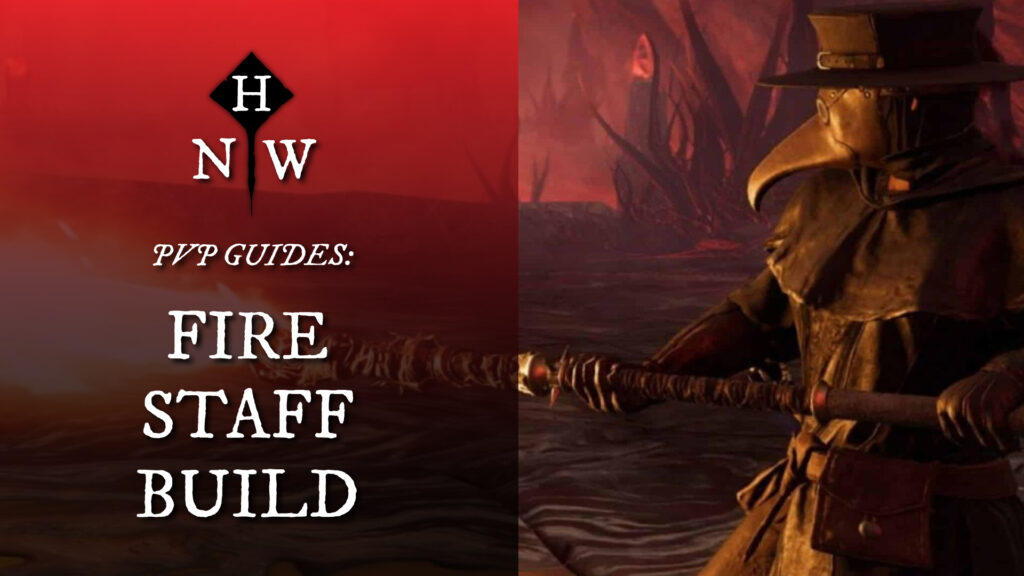 The Fire Staff in New World is notorious for being the hardest hitting weapon in the game, with a high-risk, high-reward playstyle. Abilities like Incinerate and Burn Out put the player in a vulnerable state, but if used correctly, will reign destruction upon the enemy. The Fire Staff grows significantly stronger with each point of intelligence, yet is very capable of doing high damage when used as a secondary. 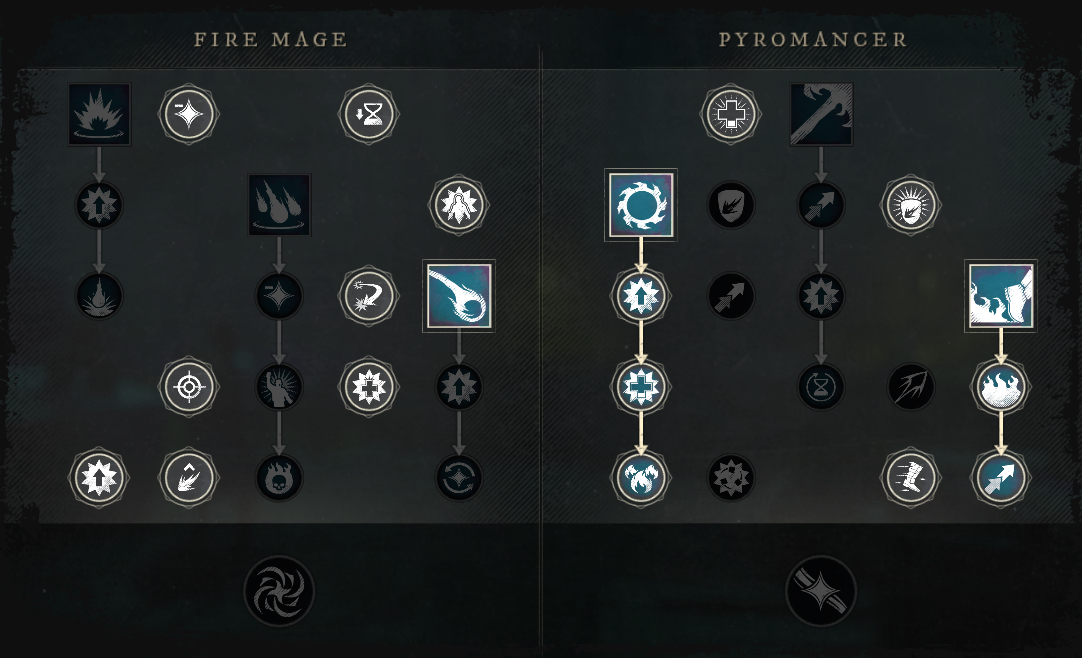 Fireball is exactly what it sounds like – a fireball. Incredibly easy to hit and dealing lots of AoE damage, Fireball puts a great deal of pressure on any enemy. Fireball is extremely reliable, making sure the caster can cause damage even if things aren’t going their way. The passives are not taken for this ability due to its basic form being strong on its own. It is the bread and butter of any fire staff player – having little effect on the casters mobility with on-demand damage.

Incinerate is the most punishable ability in New World, for both the caster and the enemy. This ability puts the caster in an incredibly vulnerable state, but causes high amounts of damage. Incinerate’s basic form is underwhelming, but when paired with its passives, is an evolution of its past life.

These passives allow Incinerate to be worth the risk of deeming the player vulnerable. The Flame Out! passive itself allows 2 uses of the ability per 1 cast, which Scored and Cauterize Wounds both benefit off of. Double the burn, double the heal, and double the damage.

Burn Out is the only mobility that the weapon has to offer, but it is not to be taken lightly. Used not only for mobility, Burn Out causes high amounts of damage and leaves a ticking burn on enemies that are struck, as well as leaving a wall of fire behind the user. Furthermore, the trail that the caster takes with Burn Out can be morphed by moving the mouse mid cast, allowing for precise movement while in sticky situations.

The first passive, All In, is not all that fantastic, but can grant the caster lots of cooldown reduction if used correctly in large-scale PvP encounters and 50v50 territory wars. This passive is taken primarily to get to Heat It Up, which turns Burn Out into a much more reliable ability. With a long 20 second cooldown, players will want to be careful not to use Burn Out too aggressively when the time is not right. Casting Burn Out into the backline of a territory war can be highly impactful, but only if there is a way out of the situation that the caster puts themselves in.

This fire staff build excels in not only single target damage, but area of effect damage as well, and maximizing damage output through animation cancelling and timing is a must. The fire staff auto attack (both light and heavy) is mobile, but slow, so animation cancelling the end of the auto attack animation into a Fireball is highly recommended. The top-end damage that the fire staff can dish out is high due to the weapons synergy with critical hits. A critical hit with a fire staff in this build causes multiple passives to activate – burning through Singe, and 20% increased critical damage through Prophet of a Fire God. Critical hits with the fire staff are the deciding factor on when to be aggressive or defensive because of the impact that they have on the target.

Incinerate must be used wisely as it can be the bane of the casters existence. Awareness is key when deciding to cast this ability or not. Perfect timing is when the target is slowed or CC’ed, or casting Incinerate when an enemy player is aggressing toward the caster, but with enough time to get the animation off. Since Incinerate hits twice due to Flame Out!, it is extremely punishable to players that are caught unaware, dealing massive damage, causing a burn, and causing a push-back. To get full use out of Incinerate and its passives, it is recommended that the caster saves the ability for when their health is not full, to benefit from Cauterize Wounds. To use Incinerate correctly will take practice, and timing is everything. Using it as more of a defensive ability that is well timed for aggressing players is where the caster will find the most success.

Burn Out is where the fire staff user finds their mobility, alongside a good source of high, on-demand damage. Burn Out is exceptional both offensively and defensively, providing for both a good escape from sticky situations and a good initiator to get close to vulnerable targets. Burn Out should RARELY be used as ONLY a “escape” ability. Burn Out provides enough of a gap between the caster and the target while going THROUGH the target to do damage, using Burn Out to its full advantage. Unless the caster is trying to close a distance that is greater than the distance that Burn Out provides, it should always be used to do damage as well. It is incredibly important to note that the path of Burn Out can be turned mid cast, providing for a higher skill ceiling and more variability. Ending position is vital when using Burn Out for its mobility because of the short animation lock that the ability causes at the end of the cast. The caster should be wary that they do not end up in a position that they regret, because Burn Out is the only way out of it, and that ability is now on cooldown.

The fire staff auto attacks require precise aim because of the high amount of impact that they can have on the target. Passives like Flare and Singe make the fire staff’s auto attack potential untouched in New World. The caster can be completely out of mana and still dish out tons of damage with heavy auto attacks that can proc Singe. 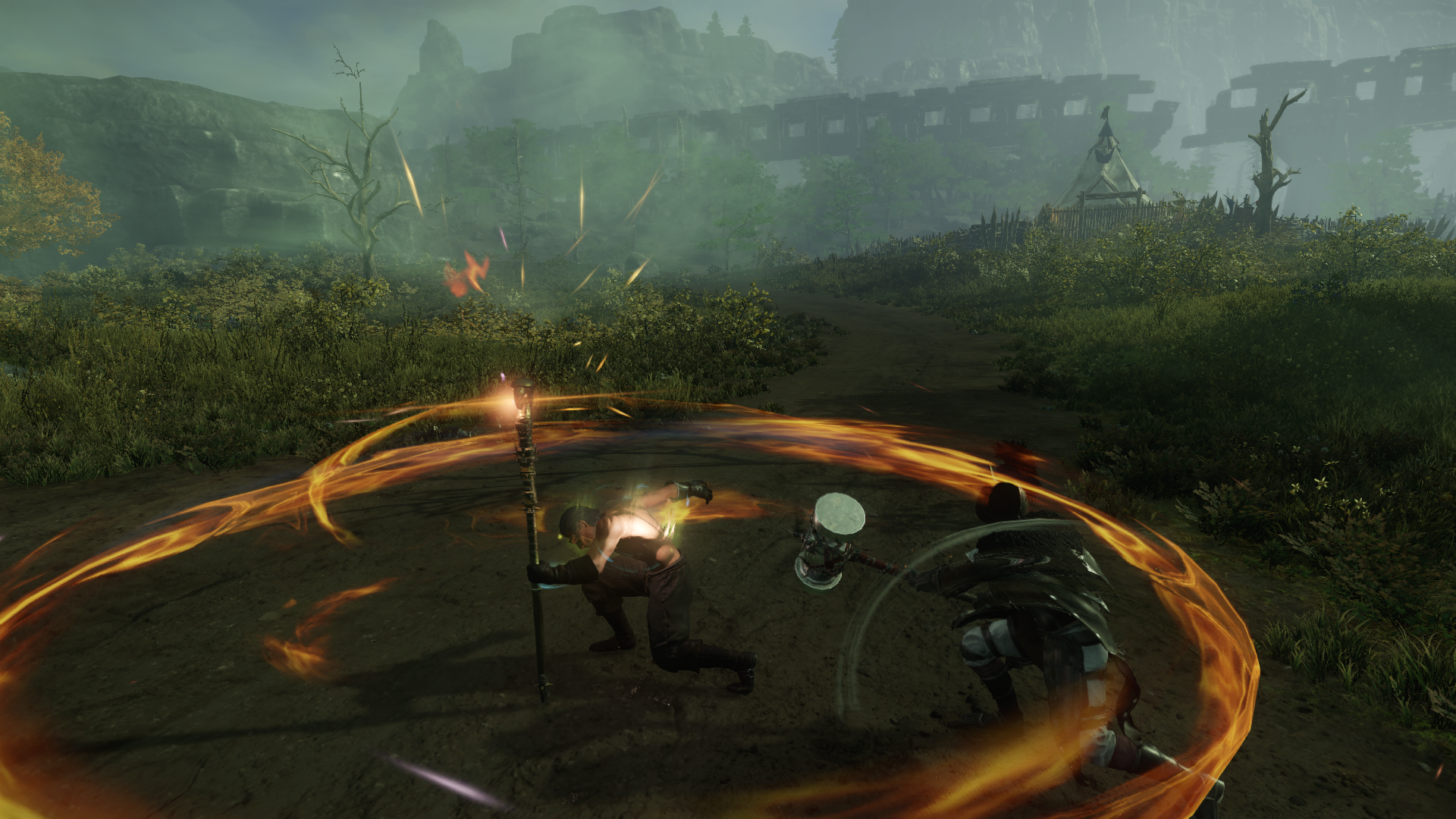 The fire staff fully scales with the Intelligence attribute at 1.0X. This means that for every point that a player puts into Intelligence, the fire staff will gain 1 full weapon damage. Since the fire staff is one of the best scaling weapons in the game, intelligence is top priority when distributing attribute points. Reaching 200 constitution is necessary, however, and will provide an abundance of defensive bonuses. In a 500 attribute total build, the recommended attribute distribution is:

Restores 9.3 mana per hit with Incinerate.

Mana regen increased by 37% for 8 seconds after using Burn Out.

The only option worth looking at here is Empowering Fireball, which is undoubtedly one of the highest impact weapon ability perks in the game. A flat 31% damage increase of Fireball is not to be taken lightly, and turns it into an even heavier hitting ability. Siphoning Incinerate is not worth it due to the ability being difficult to hit. Efficient Burn Out is also quite lackluster, as a 37% increase to mana regen is insignificant.

Post Views: 13,469
We use cookies on our website to give you the most relevant experience by remembering your preferences and repeat visits. By clicking “Accept All”, you consent to the use of ALL the cookies. However, you may visit "Cookie Settings" to provide a controlled consent.
Cookie SettingsAccept All
Manage consent