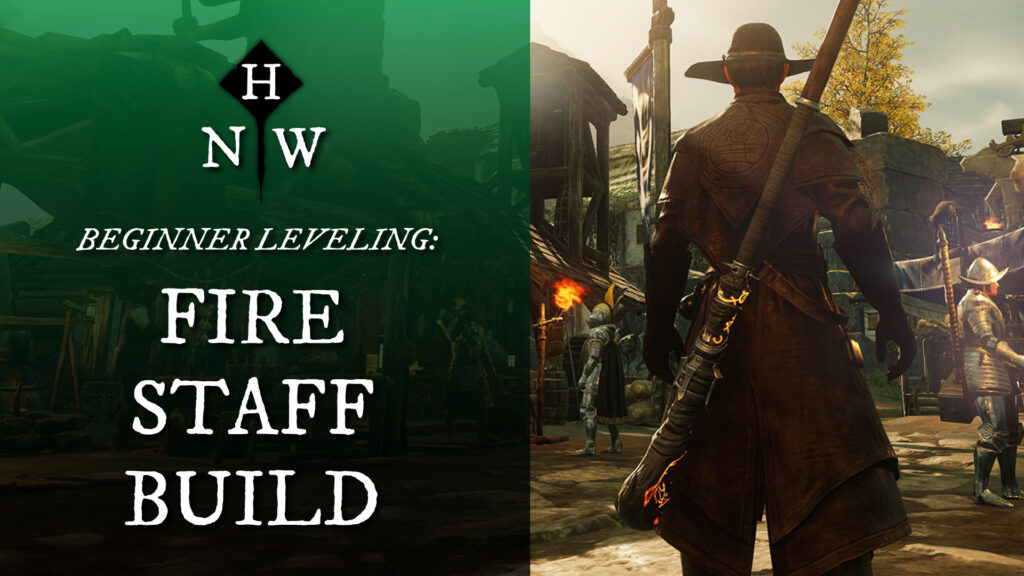 The fire staff is a great weapon to use for leveling due to its hard-hitting long-ranged auto attacks, significant AoE potential, and mana management. Although the abilities that are taken in this build do not provide any crowd control, the raw damage output that the fire staff brings is enough to make up for it. Passives like Spell Focus (1) and Flare (5) are both acquired by level 5 mastery with the fire staff, and provide for unlimited damage output and no mana management needed due to heavy attacks no longer causing mana. 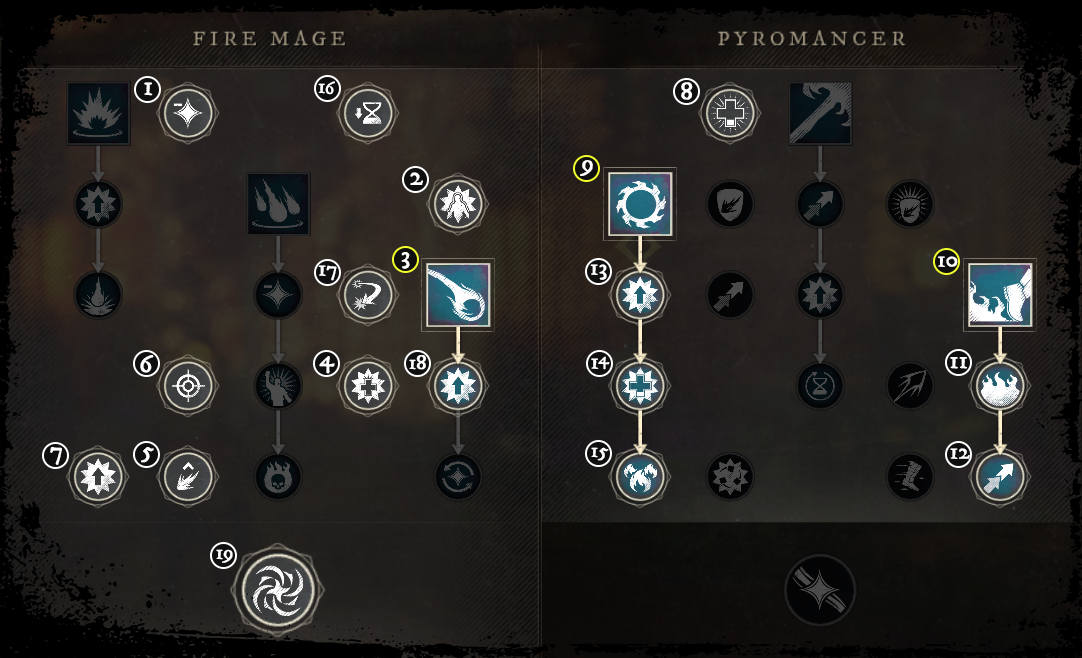 Fireball (3) is taken by level 3 mastery due to the sheer damage that it can provide in the early levels, as well as the ability to begin AoE pulling mobs to level at a faster rate. Fireball (3) leaves a burning field on the ground that does ticking fire damage to enemies inside it, allowing the caster level with a more AoE playstyle compared to other weapons.

The two passives of Fireball are lackluster, and those early mastery points would be wasted on them if taken. Scorched Earth (18) is taken at a later mastery level due to mobs being more difficult to take down the higher level they are, and a 9s burning field of AoE is much more impactful than its previous 6s. This will allow for bigger mob pulls later in the game. Catch does have an impact on the caster’s mana, but since Spell Focus (1) and Flare (5) are taken early, no more mana management is needed.

Incinerate (9) is the ability that provides the top-tier AoE damage that places the fire staff in its own category of AoE damage potential. The single target damage that Incinerate (9) provides is nothing to shy away from, however, and should not be used ONLY for 2+ targets at a time, though that is where the ability shines. Incinerate’s (9) basic form is more on the lackluster side, but the passives are taken shortly after the ability itself and is what separates the ability from its past life.

Every one of Incinerate’s passives takes it up to a new level – more burning stacks, restored health based on damage done, and doing double damage. Both Scorched (13) and Cauterize Wounds (14) are fantastic passives by themselves, but scale even further from Flame Out! (15), scaling twice as hard because the ability is now hitting twice.

Burn Out (10) is the mobility that this leveling build needs to excel in successful AoE mob pulling, and does so by providing movement and damage output, packed into one ability.

The All In (11) passive allows for incredible use of Fireball (3) and Incinerate (9), and the more targets that are hit with Burn Out (10) when this passive is active, the better. Because this passive reduces the cooldown of ALL fire staff abilities, make sure to have all other fire staff abilities already on cooldown BEFORE casting Burn Out (10) into the pack of mobs that have been pulled and are waiting for that AoE damage.

The fire staff by itself, when in the right hands, is a force to be reckoned with. The AoE capability and the raw scaling of the fire staff makes it a top notch weapon for efficient and care-free leveling. Fireball (3), Incinerate (9), and Burn Out (10) are all abilities that can hit multiple targets at once, so AoE pulling mobs is highly recommended while leveling. Pulling mobs with auto attacks (heavy or light), packing them into a tight group, and unleashing the chain of abilities that this build provides will prove most effective. That chain of abilities would look like this:

The reason that Fireball is cast early is because it will proc Rune of Helios (19), which both Fireball (3) and Burn Out (10) will gain the effect of. The amount of mobs that can be pulled with this chain of abilities is unmatched and uncapped – there is no limit. As long as the player is capable of dodging when necessary and having the required movement, entire camps of 10-15+ mobs can be downed in one or two rotations of the combo listed above.

The fire staff also provides little to no mana management due to the passives of Spell Focus (1) and Flare (5), so when AoE pulling mobs is inefficient due to respawn points, killing mobs with just heavy auto attacks and the casual Fireball (3) is never a bad idea, and how the beginning levels of this build will look like. 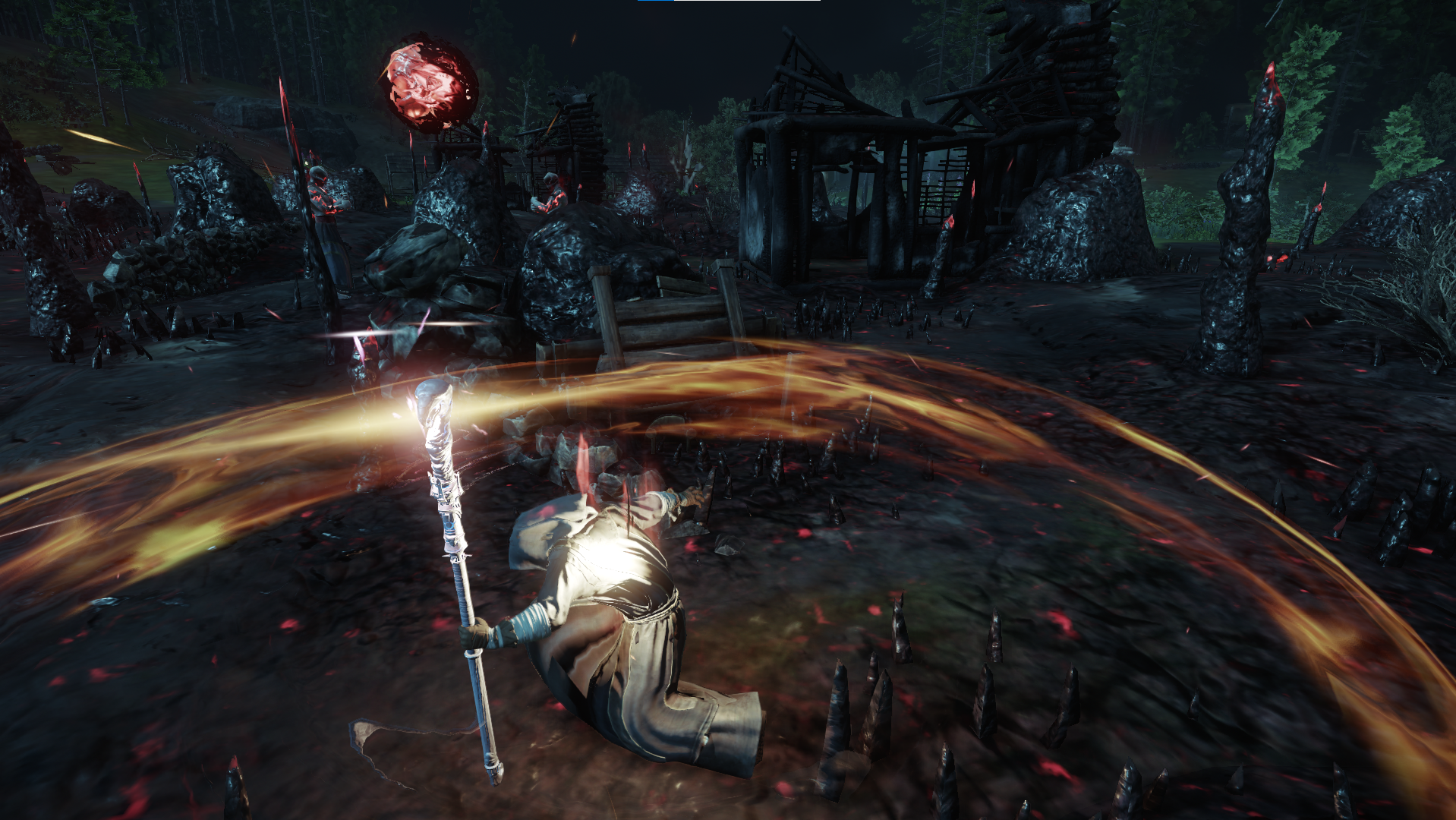 The Intelligence attribute is priority here due to the sheer damage output of the fire staff auto attacks and abilities, and with Burn Out (10) providing such great mobility, Constitution is not that necessary. The most important Attribute Threshold Bonuses are listed below:

Getting to 200 Intelligence is priority here, due to the perk that is received – +10 mana after a dodge. Mana management is not so much of a problem up to this point, but receiving 10 mana after dodging fixes any problems that the player may have been having with managing their mana. Mana becomes almost obsolete after reaching 200 Intelligence. 50 Constitution will be a priority after reaching 200 Intelligence. Consumables being 20% stronger have a large impact when consumables are needed in sticky situations – both mana and health.

Restores 9.3 mana per hit with Incinerate.

Mana regen increased by 37% for 8 seconds after using Burn Out.

Empowering Fireball is the go-to weapon ability for leveling – providing 31% (depending on iLvL of item) additional damage to the fire staff’s main source of damage is highly impactful. This will make the difference between finishing off an AoE pull or not.

Siphoning Incinerate is not worth taking due to the inconsistency of the ability, while Efficient Burn Out is not a bad second option, especially if mana management is showing to be a problem.

Post Views: 22,630
We use cookies on our website to give you the most relevant experience by remembering your preferences and repeat visits. By clicking “Accept All”, you consent to the use of ALL the cookies. However, you may visit "Cookie Settings" to provide a controlled consent.
Cookie SettingsAccept All
Manage consent