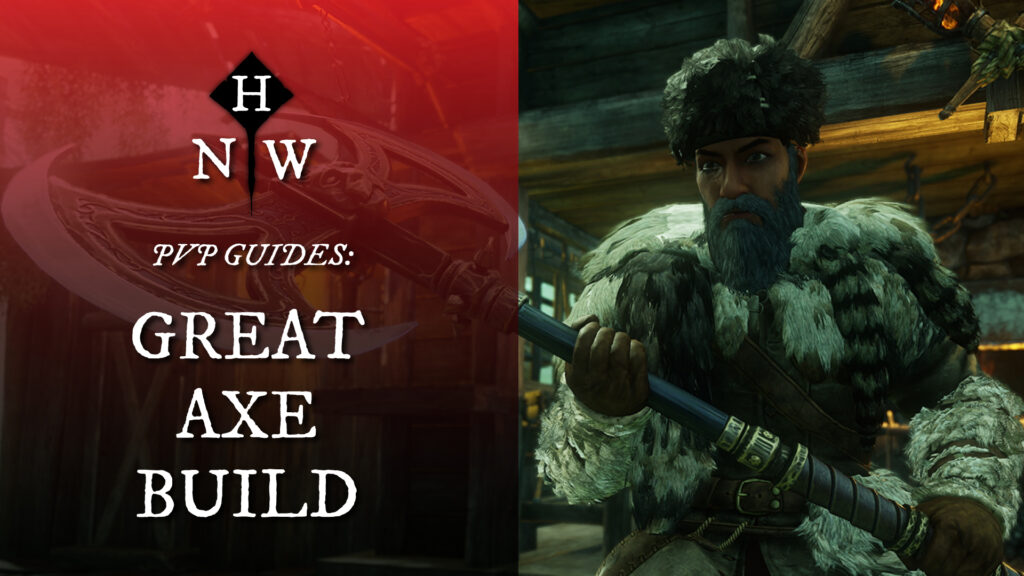 The Greataxe in New World performs very well in PvP due to its high functioning abilities like Charge, Gravity Well, Reap, and Execute. Although it doesn’t have much of a crowd control tool kit, the greataxe makes up for what it lacks with high damage potential and survivability mechanics such as the Hunger passive under Reap. Choose the greataxe if you want a hard hitting and visceral melee PvP experience. 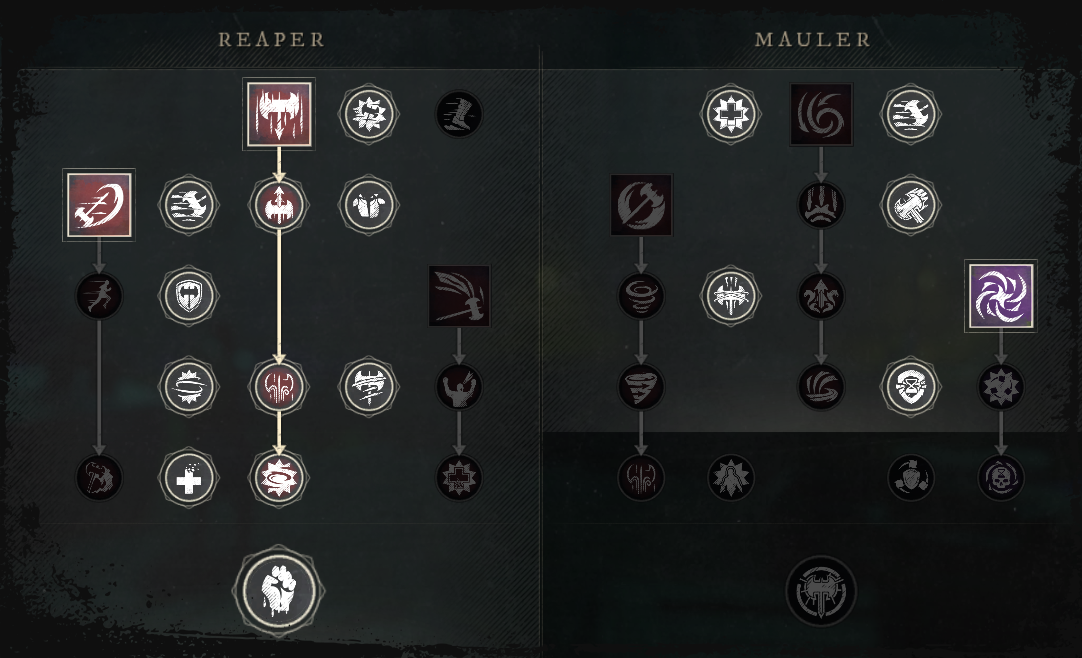 Reap is an extremely high impact ability in PvP. Being able to heal yourself (with the Hunger passive) while dishing out some serious damage and pulling enemies in close for follow-up attacks makes Reap a go-to ability in many situations.

All of the passives under Reap add massive value to the ability. The passive Hunger takes the cake on value added due to its scaling heal. As the greataxe does more damage, so does the healing coming from Reap. Greataxe players should be careful using Fatal Attraction passive because the extra animation is very punishable in high level PvP if the ability doesn’t land successfully. Fatal Attraction damage also benefits from the Hunger passive, so the risk is worth the reward.

Charge is one of the most infamous abilities in New World, allowing greataxe players to quickly advance on enemy players with an incredible amount of pathing flexibility. One of the reasons why the greataxe performs well in PvP is due to the versatile nature of Charge, an ability that will be heavily focused on in the Playstyle section of this build guide.

No passives are taken under the Charge ability due to their low value in many situations. In most instances, Greataxe users will use Charge to animation-cancel light or heavy attacks, rendering both Frenzied Momentum and Unpredictable Strike (longer animation) useless. Since both passives also scale up to the full 10 meters, most of the time the max damage will never be reached.

Gravity Well is the greataxe’s only real crowd control-type ability. With a huge radius and strong pull strength, Gravity Well keeps affected players stand-still, making them a great target for other greataxe abilities like Charge, Reap and Execute (if you decide to sub-in execute).

Similar to Charge, no passives will be taken under Gravity Well. Both the Crowded Well and Unyielding passives are highly situational and require other players to benefit from the value. Having to rely on other players to generate value from your abilities makes the passive abilities totally unreliable, unless you are always participating in large-scale PvP like territory wars.

If left unchecked and uninterrupted, the greataxe can out-damage most other weapons in New World when combining the raw strength of its light attacks, animation canceled Charges, and Fatal Attraction Reaps. In order to stay unchecked and uninterrupted, greataxe players will need to finely tune their mobility and ability usage to ensure that they stay on top of their opponents at all times and trade effectively, since a 1 to 1 trade with the greataxe will favor the greataxe in most matchups.

Reap is one of the most important abilities in a greataxe PvP build because it gives the greataxe player back a significant amount of health, one of the most valuable resources in PvP. In order to increase success in PvP encounters, greataxe players should aim to squeeze in every Reap that they possibly can, using it on cooldown to constantly put pressure on the opponent and more importantly, heal themselves. Weapon ability perk Crippling Reap will ensure that passive Fatal Attraction hits and gives additional healing while opening up an opportunity for free light attack trades against the opponent.

Charge is one of the best abilities in the game and should be used in very specific ways to have the most impact. While Charge can be used as an initiation tool, it should be avoided at all costs. Not only does it leave the greataxe player at an ability disadvantage after they get to their opponent, the charge attack animation will leave the greataxe player stationary for a split second while that opponent can simply double dodge away, leaving the greataxe in the dust and without Charge. To avoid this situation, the greataxe player should use basic sprinting and its very powerful ultimate passive Blood Lust to catch up to their opponents. Once close to the opponent, greataxe players should mirror their opponent’s movements, counter dodging in the same direction, as well as using Charge as a counter to space-creating abilities like Burn Out, Evade Shot, and any ability that works to slow you down. Being critically aware of your opponents abilities and cooldowns is imperative for a high level greataxe player. While Charge can be used as a space-creating counter, it is also an amazing burst damage tool. Animation canceling and basic attack weaving is important in New World and Charge is always a fantastic candidate for animation canceling after a light or heavy attack. Many players limit Charge to an ability to be used at a distance, however, Charge can be activated and instantly canceled to deal significant damage up close.

Gravity Well bookends the greataxe with a fantastic ability that can trap most players without an escape tool like Charge, Entomb, Burn Out, and more. With a large radius and significant pull strength, opponents will be completely stuck and available for follow-up. Greataxe players should be careful when approaching highly skilled players trapped in a Gravity Well. Since trapped players will still be able to function normally, if the opponent is playing correctly, they will have saved a crowd control ability to interrupt a greataxe player moving in to deal damage. Some highly skilled players will also simply block until Gravity Well ends. This is part of the reason why we invest in Strength. The 150 Strength attribute bonus gives greataxe light and heavy attacks +50% stamina damage, punishing players that didn’t save a crowd control ability to counter Gravity Well. Inversely, greataxe players should look for good opportunities to use Gravity Well when their opponents are in a punishable state (ability disadvantage, out of stamina, etc.). 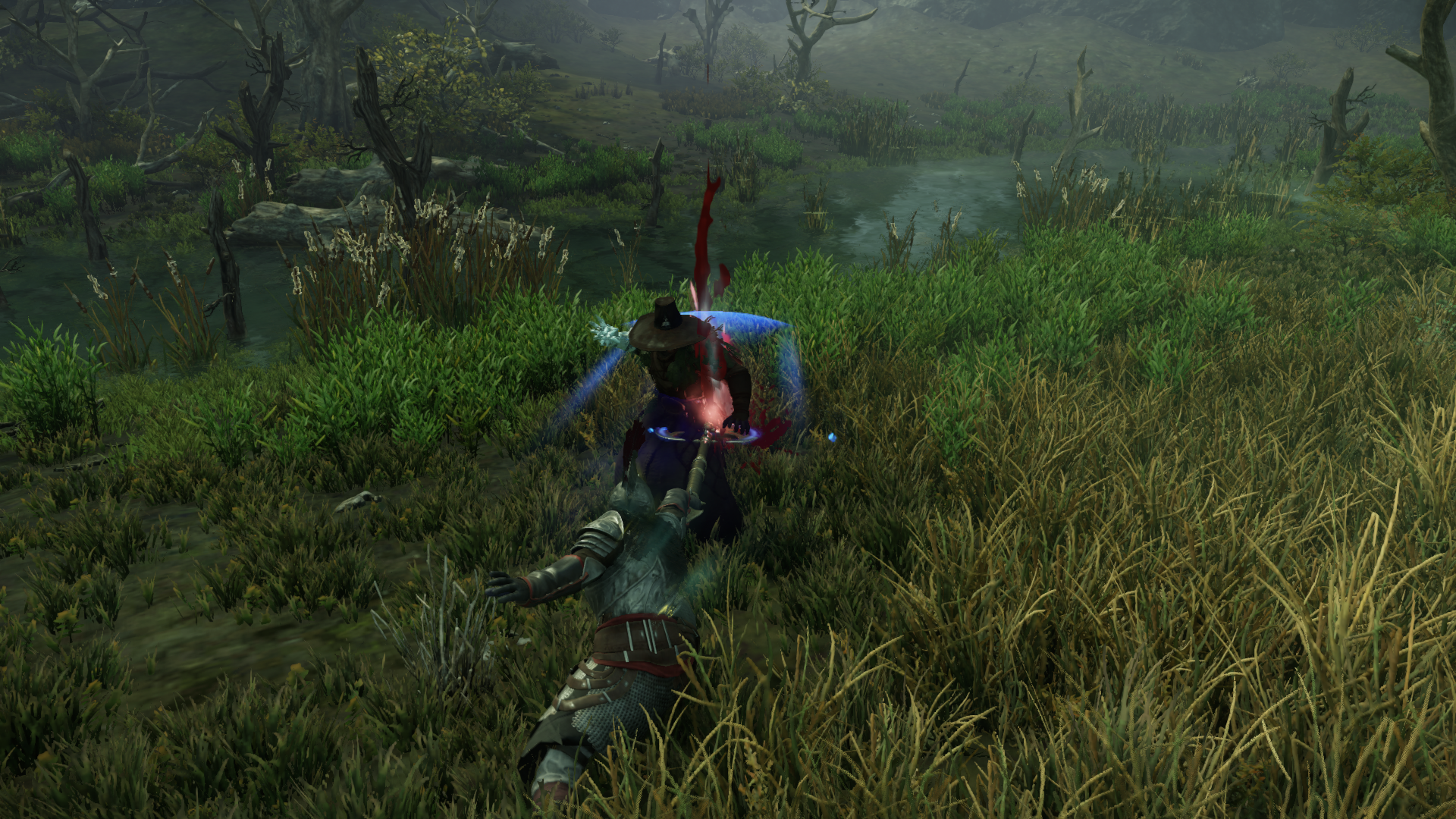 This attribute build will enable the greataxe user to protect themselves from interruption by just continuing to light or heavy attack with the 300 Strength attribute bonus. This perk is especially powerful in PvP where crowd control abilities are abundant. With such a strong light and heavy attack with a large lunge distance, the 300 Strength bonus paired with the 250, 150, 100, and 50 bonuses will make the greataxe a weapon that opponents will need to actively avoid. 200 Constitution will give greataxe users the base health pool that they need to stay in the fight while using Reap with the Hunger passive to top themselves up.

Gain 50% of your damage with Gravity Well back as Health, and cast another burst around you on successful hit.

Both Insatiable Gravity Well and Crippling Reap are great options when looking at ability weapon perks. Since the greataxe does not have many effects in terms of crowd control, it is recommended that Crippling Reap be included in this build. Reap is a fantastic ability and adding a 33% slow for 2 seconds will give greataxe players time to get a few easy light attacks in, completely changing the outcome of some encounters.

Post Views: 24,269
We use cookies on our website to give you the most relevant experience by remembering your preferences and repeat visits. By clicking “Accept All”, you consent to the use of ALL the cookies. However, you may visit "Cookie Settings" to provide a controlled consent.
Cookie SettingsAccept All
Manage consent