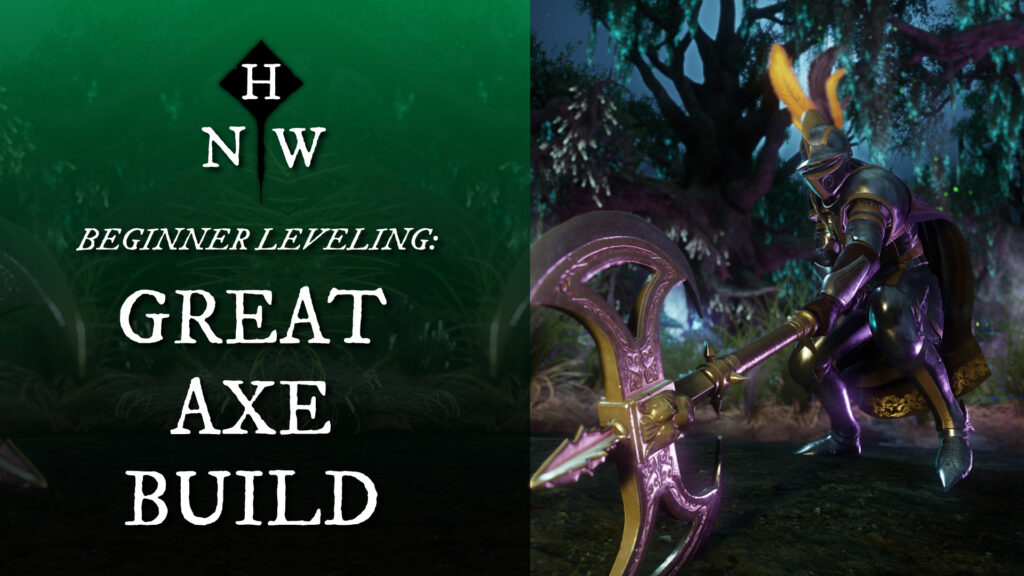 The greataxe is a great weapon to use for leveling due to its wide cleaving light attacks, hard hitting abilities, and use of the ability Charge to move around Aeternum quickly. Although the greataxe has little to no crowd control, the damage and healing that the weapon provides through Reap (3) and Execute (4) will allow greataxe players to work through most content easily, with or without teammates. 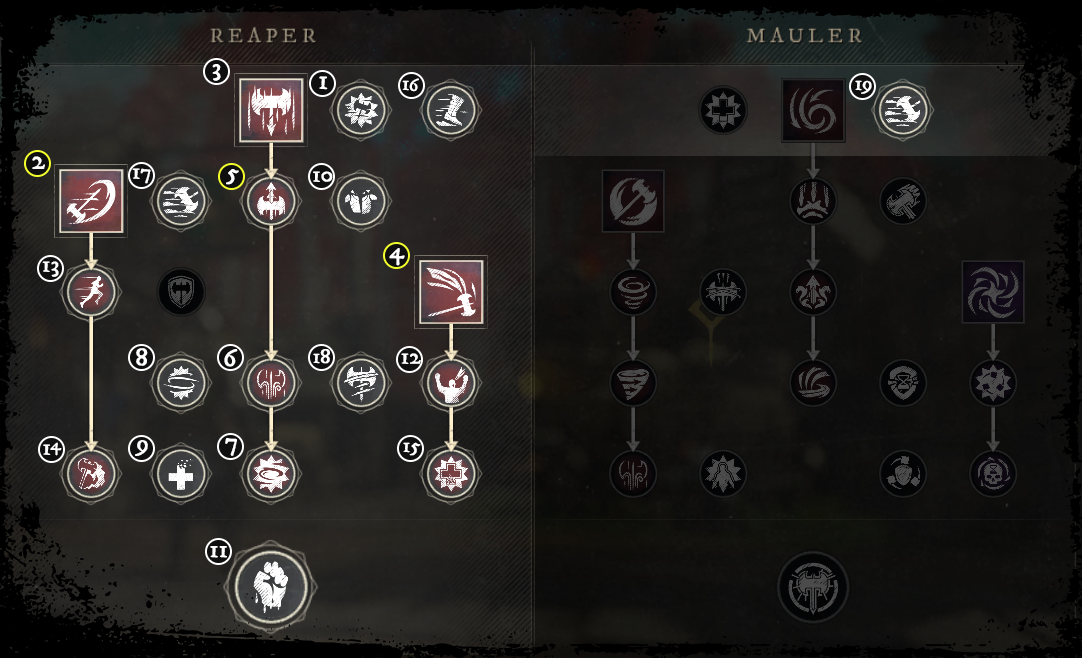 Reap (3) is a great ability for leveling once the second Reap (3) passive Hunger (6) has been acquired. Any abilities that give a player health while also dealing damage are usually amazing leveling style abilities since the extra health will help to keep the user on their journey rather than eating food and waiting for health to regenerate.

All of the passives under Reap (3) add massive value to the ability for leveling. The passive Hunger (6) is the most important, as it allows the ability to begin healing the user often and for a significant amount. Fatal Attraction (7) amplifies the damage and healing of the ability by adding a second and even more powerful attack, virtually doubling the damage and healing of the ability. It is important to note that Hunger (6) scales on weapon damage rather than healing for a flat amount. Making sure that you have the most powerful greataxe that you possibly can at all times will make leveling a much more enjoyable experience for greataxe players.

Charge (2) is a very versatile ability for leveling. In its most basic form, Charge (2) can be used as a gap-closer to engage monsters that are within 10 meters, or as a space-creator from monsters threatening to kill the greataxe player. Pro tip: Activating and then canceling the ability immediately will cause Charge (2) to end without having moved the player forward, dealing the damage of the ability directly in front of the player. This technique can also be used to cancel the greataxe’s light and heavy attacks. Charge (2) can also be used out of combat to make moving around Aeternum a bit quicker.

Once Unpredictable Strike (14) has been acquired, this is what greataxe players will use while leveling. Although the swing animation is a bit slower, the extra damage and cleaving type swing path make it a much more desirable ability for fighting packs of monsters while leveling.

Execute (4) is the hardest hitting ability in the greataxe’s toolkit and is taken in this build to allow the greataxe user to solo more difficult content as well as group up and eliminate large swathes of enemies at once. Greataxe players will always want to use Execute (4) when the enemy is below 50% health to boost the ability from 200% to 300% weapon damage.

Open-world monsters aren’t particularly difficult, but some monsters in New World have an obscene amount of health and can stagger you constantly. Execute (4) will help in these more difficult situations by giving the player a hard hitting ability that has stagger (with Unstoppable Greed (12) passive), rendering monster staggers and stuns useless.

Melee weapons in New World excel in the leveling space because they don’t use mana like the fire staff and ice gauntlet do, and they don’t use ammunition like the musket or bow. The greataxe is one of the best melee weapons of the bunch due to it’s wide swinging attacks and large self-healing opportunities with Reap (3) and passive Fatal Attraction (7). Many of the passives taken in this build work to boost the power level of the greataxe basic attacks, and thus, this will be the main focus of the build. Since Keen Edge (8), Critical Condition (18), and Critical Gains (17) all work through the critical hit mechanic, more damage instances is best, allowing the player to critically hit more often, activating these passives. These passives, synergizing with Greed (1), Death’s Embrace(10), Feed (9), and Blood Lust (11), amplify the power level of greataxe light and heavy attacks extensively. It should be noted that Greed (1) light attack stacks stay active for 5 seconds. Players using this passive should look to prolong the amount of time that they have full stacks by using a ranged weapon to continuously pull monsters. Players can also move into more monsters while actively fighting, using face pulling or Charge (2) to chain pull.

In the hands of a moderately experienced player, the greataxe can be, and should be used to pull and kill 2-6 monsters at once due to the cleaving light attacks and wide hitting + healing ability Reap (3) talked about above. For smaller groups of monsters (1-3 mobs), weaving each ability between light attacks while dodging some of the monster’s attack moves will prove the most effective. A great combo would look something like this:

For larger groups (5+ mobs), greataxe players will need to kite the monsters while using their abilities on cooldown to burn the pack down. Every ability listed in this build is able to hit multiple monsters at once (even Charge (2)) so learning how to position your character and use abilities dynamically and on the run will be important. How to kite using the greataxe:

Turn quickly and use Execute (4) 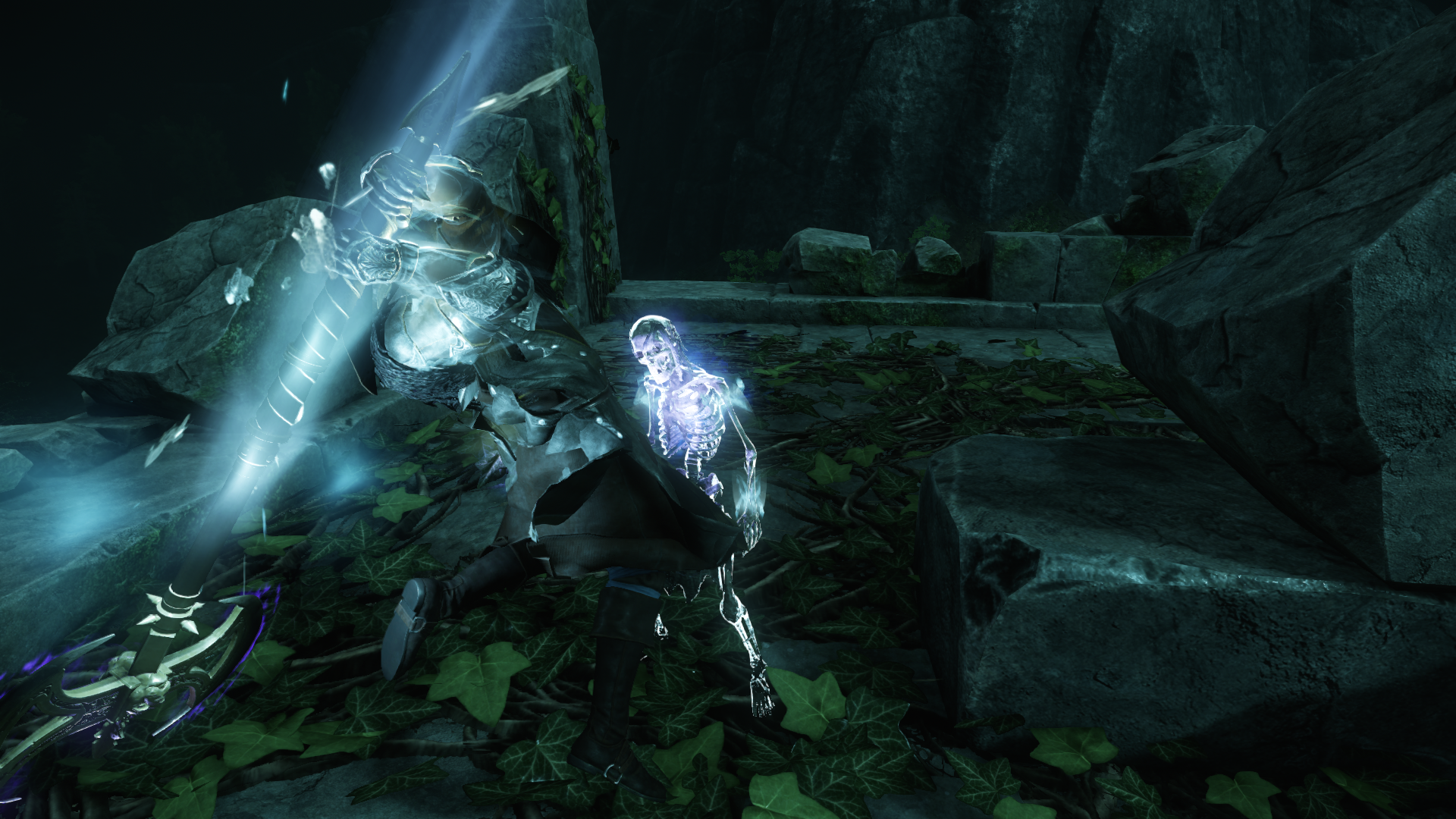 The greataxe fully scales with the Strength attribute at 1.0X. This means that for every point that a player puts into Strength, the greataxe will gain 1 full weapon damage.

Understanding that the greataxe is a melee weapon and that monsters in New World are unlike players and their attacks home in on the players position, Constitution becomes an incredibly valuable attribute. The most important Attribute Threshold Bonuses are listed below:

Getting to both 50 Strength and 50 Constitution as quickly as possible is important for getting off to a good start with the greataxe. 50 Constitution is valuable early on because it reduces the amount of consumables that a player will need to use by a significant amount. Light attacks will be the dominant basic attack used on the greataxe, so 50 Strength will give players a small boost in leveling speed and performance.

Gain 17% of health back on kill with Execute.

For leveling, greataxe weapon ability perk Mending Execute reigns supreme. Execute (4) is a hard hitting ability that incentives greataxe players to kill their enemies with the ability. Since Execute (4) can hit multiple monsters at the same time, and a leveling player will be killing lots of monsters, a percentage of a player’s health back is a very powerful perk.While leveling, time efficiency is important, so being able to use Charge (2) more often with Refreshing Charge could be useful, however, most of the time, experienced greataxe players will be using Charge (2) to animation cancel their light attacks when fighting monsters instead of using it as an engagement tool.

Post Views: 23,264
We use cookies on our website to give you the most relevant experience by remembering your preferences and repeat visits. By clicking “Accept All”, you consent to the use of ALL the cookies. However, you may visit "Cookie Settings" to provide a controlled consent.
Cookie SettingsAccept All
Manage consent