The ice gauntlet is a great weapon to use for leveling due to its efficiency, high damage in the form of AoE and single target, and slowing and crowd control capabilities. All three abilities taken in this build affect multiple targets and have great value for any situation that the user might find themselves in. Ice Storm (2) for top notch AoE damage that scales from Punishing Storm (8), Ice Shower (4) for slows and great synergy with stand-alone passives, and Entombed (5) for mana management and safety. This build becomes powerful early on because all three primary abilities are taken by weapon mastery level 5, and you’ll see why. 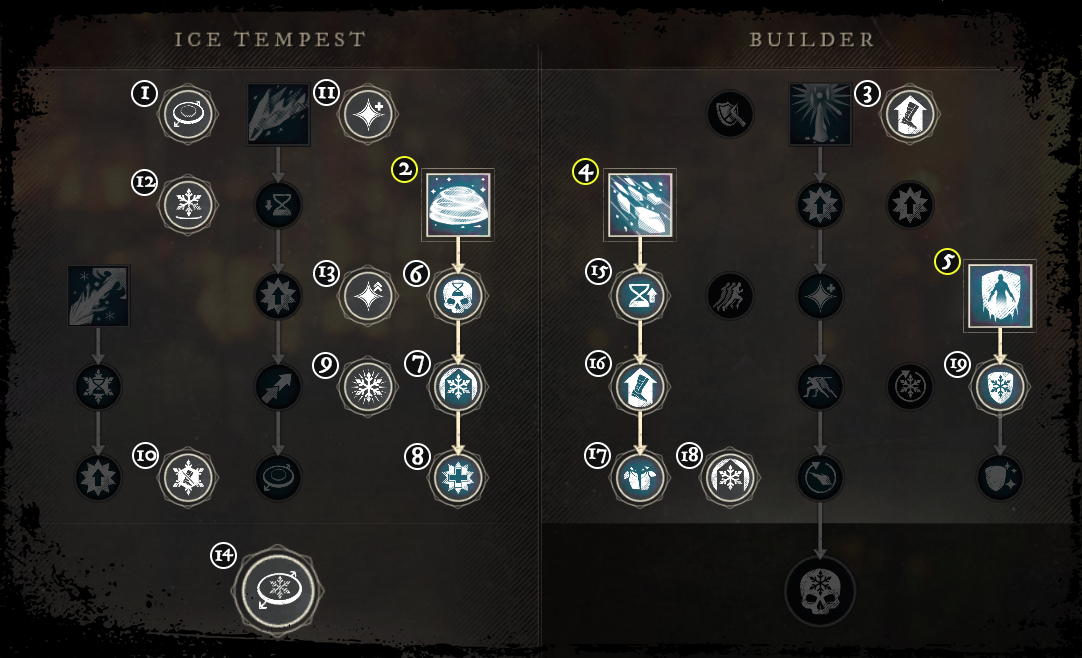 Ice Storm (2) is taken by level 2, giving the leveler the potential to chain pull mobs in the early levels. The passives are great for this ability, but are taken shortly after because getting all three abilities early on is more beneficial. The 25% slow that Ice Storm (2) provides to enemies inside gives the user enough breathing room to achieve their goal – whether that be kiting, pulling more mobs, or even surviving.

The three passives of Ice Storm (2) are priority as soon as the other two primary abilities, Ice Shower (4) and Entombed (5), are taken. This is because points 6 and 7, Weakening Gust (6) and Storm Summoner (7), respectively, aren’t fantastic, but are needed to reach the last, and strongest, passive of the Ice Storm (2) tree – Punishing Storm (8). This passive promotes uncapped mob pulling, granting 10% damage per enemy inside the storm.

Ice Shower (4) is the tool for the ice gauntlet user to control and alter enemy pathing. Basically, putting the enemy exactly where you want them. Chaining an Ice Storm (2) after an enemy landing inside Ice Shower (4) is secured AoE damage because of the oppression that the shower provides.

The Ice Shower (4) passives are good, but not great, which is why they are taken at a later mastery level. The basic form of Ice Shower (4) is enough to handle things on its own in the early levels. However, Frigid Showers (17) does provide a power spike when reached, rending targets that are hit by it reducing its defense by 10%, allowing the stand alone passives of Critical Frost (9) and Heavy Freeze (10) to get to work.

Entombed (5) is undoubtedly the best stand-alone defensive ability in the game, being the only ability that grants the player immunity for duration, as well as high mana regeneration while inside. Entombed (5) can be used between pulling mobs for faster and more efficient mana management, or to lure mobs in a circle around the tomb, dealing a high amount of damage when breaking out.

Entombed (5) in its basic form is strong, which is why Strengthened Tomb (19) is the last point that is taken in entirety of the ice gauntlet tree. However, there are plenty of instances where Strengthened Tomb (19) will have great use, increasing defense by 25% after the tomb breaks, giving the player some damage reduction if they happen to break out into a vulnerable position.

The ice gauntlet is a top-tier leveling weapon, and the playstyle provides for a smooth leveling experience. Mana management turns almost obsolete as soon as Entombed (5) is taken, AoE capabilities are given at only level 2 mastery through Ice Storm (2), and high damage heavy auto attacks from Critical Frost (9) and Heavy Freeze (10). While having only one primary ability that deals damage itself, this build provides high amounts of damage through auto attack modifiers. Pulling mobs with auto attacks (heavy or light), packing them into a tight group, and unleashing the chain of abilities that this build provides will prove most effective. That chain of abilities would look like this:

Just dropping Ice Storm onto a pack of mobs is not enough to finish it off, even if the damage multiplier from Punishing Storm (8) is through the roof. Dropping Ice Storm (2) and following it up with a number of heavy attacks will prove most effective. These heavy attacks will benefit from both Critical Frost (9) and Heavy Freeze (10). Following a number of heavy attacks, laying down Ice Shower (4) between the caster and the mobs will allow for more space to kite, and to benefit from Critical Frost (9) and Heavy Freeze (10) once again. Following this, cast Entombed (5) to gather the group of mobs into a tight group and break out of the tomb to cause high AoE damage and knocking enemies back, but they’re probably already dead.

Movement is imperative while using the ice gauntlet to level, especially when AoE pulling large packs of mobs. Please refer to our Advanced Movement Mechanics guide to learn more.

Getting to 200 Intelligence is priority here, due to the perk that is received – +10 mana after a dodge. Mana management is not so much of a problem up to this point, but receiving 10 mana after dodging fixes any problems that the player may have been having with managing their mana. Mana becomes almost obsolete after reaching 200 Intelligence. 50 Constitution will be a priority after reaching that 200 Intelligence. Consumables being 20% stronger have a large impact when consumables are needed in sticky situations – both mana and health.

Reduced all ice cooldowns by 20% on a killing blow.

Iced Refresh is the go to weapon ability perk for the ice gauntlet, significantly increasing the possible top-end damage output of the weapon. Basically, this perk provides a large amount of cooldown reduction for all ice gauntlet abilities on any killing blow, with no internal cooldown. Multiple targets can die from the hand of the player with this perk within a short time frame, allowing for multiple Ice Storms (2) and/or Ice Showers (4) to be laid out at once.

Unending Thaw allows for more breathing room to land auto attacks that benefit from both Critical Frost (9) and Heavy Freeze (10) after the enemy escapes from Ice Storm, but is not that impactful due to these passives only affecting one target at a time. Since AoE mob pulling is highly recommended when using this build, Iced Refresh is prioritized.

Post Views: 21,666
We use cookies on our website to give you the most relevant experience by remembering your preferences and repeat visits. By clicking “Accept All”, you consent to the use of ALL the cookies. However, you may visit "Cookie Settings" to provide a controlled consent.
Cookie SettingsAccept All
Manage consent