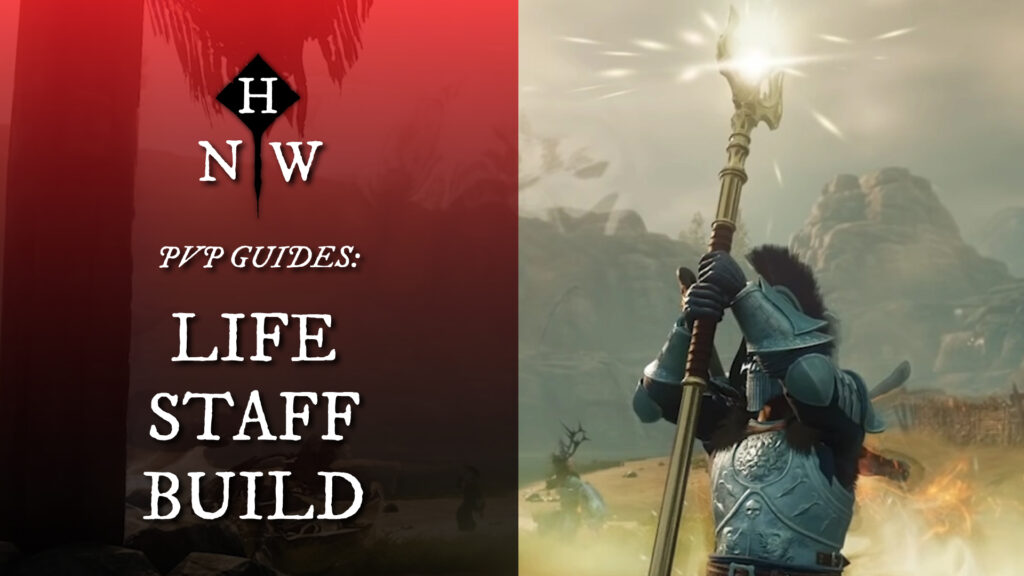 In PvP, health is one of the most important resources that a player has because it dictates whether a player is alive (functioning) or dead (not functioning). In New World, the life staff is the only weapon that has the capability to directly heal player characters, making it uniquely powerful and positioned well in PvP. 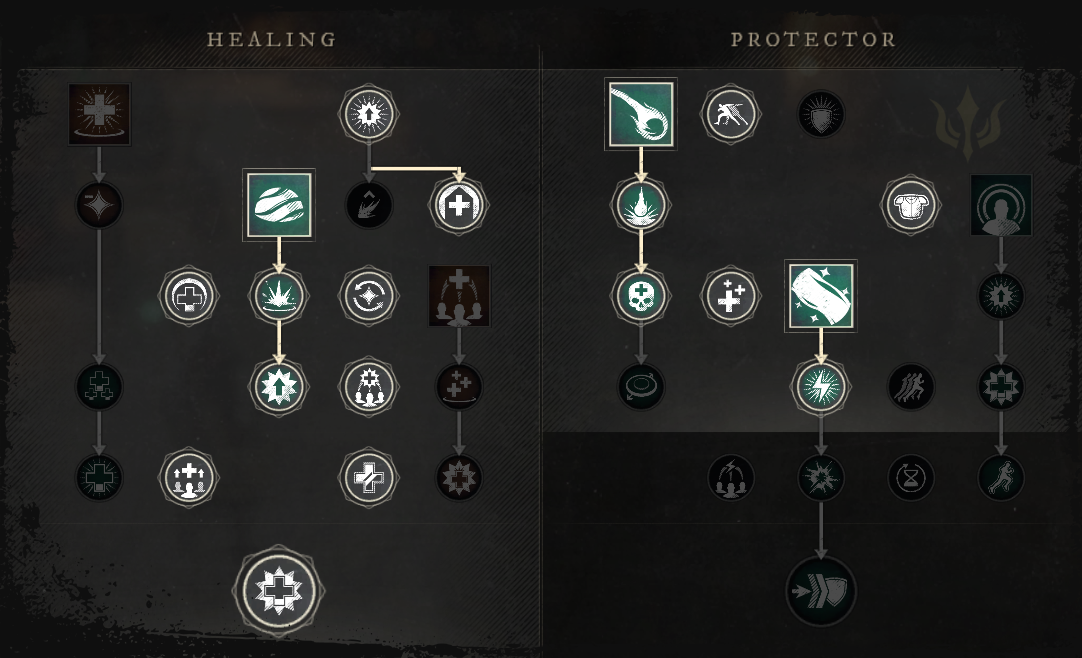 Sacred Ground is one of the life staff’s most powerful healing spells in PvP. The reason it performs so well is because the ability persists through weapon swaps, allowing the user to heal while dealing damage with a secondary weapon. An ability that has a high Mana to Heal ratio, persists through weapon swaps, and gives extra perks to players standing inside of it with the Holy Ground and Blessed passives makes Sacred Ground a go-to ability.

Holy Ground and Blessed are an easy pick-up due to the power level each passive. The fact that there is no cap on the amount of players that benefit from these buffs makes them infinitely valuable.

In PvP, burst damage is king. Since there are many ways to regenerate health in New World, it is more effective to kill a player quickly. Killing an opponent before they are able to use a number of consumables and weapon abilities that heal, will dramatically reduce the total amount of damage that is needed to kill that opponent. As the average skill level of players inevitably increases, the time that it takes for players to kill each other should decrease. This is because players will continue to find better ways to deal heavy amounts of damage within a smaller and smaller window while also becoming more consistent with basic attacks and abilities.

Knowing that burst damage is important in eliminating other players, life staff users must understand this principle and expect their opponents to want to do the same. This means that being able to heal through burst damage whether on the player themselves or teammates will be very important for life staff users in PvP. Light’s Embrace fits this single-target burst healing theme very well with high weapon damage scaling (100%+ 30% PER BUFF ON TARGET) as well as an amazingly strong PvP weapon ability perk Accelerating Light’s Embrace and a powerful passive, Inspire. Every 4 seconds (cooldown) players healed with Light’s Embrace get 25 stamina and a 23% movement speed bonus for 3 seconds. With only a 4 second cooldown, this ability brings so much value with a high up-time.

Inspire is the only passive that we take under Light’s Embrace for obvious reasons. 25 stamina can give healed players an extra dodge that could help them avoid damage or place themselves into a better position.

This particular selection of abilities gives a life staff user a great foundation, providing AoE heals (Sacred Ground), direct healing (Light’s Embrace), buffs, as well as some damage with Orb of Protection. In this PvP build, Life Staff players should be looking to keep teammates and themselves chock-full of buffs in order to help mitigate as much damage as possible. A 15% Fortify bonus from Protector’s Touch is a buff that reduces the incoming damage that an ally takes by the percentage amount. However, it can also be thought of as a heal over time ability,  healing the player for the amount of damage mitigated from the buff, since the life staff player won’t have to heal that damage later. Extra buffs on targets also means that Light’s Embrace heals for much higher (30% per buff on the target).

Players will switch back and forth between their weapons when life staff abilities are off of cooldown, making full use of all abilities, especially Sacred Ground which persists through a weapon swap which makes it ultra powerful. 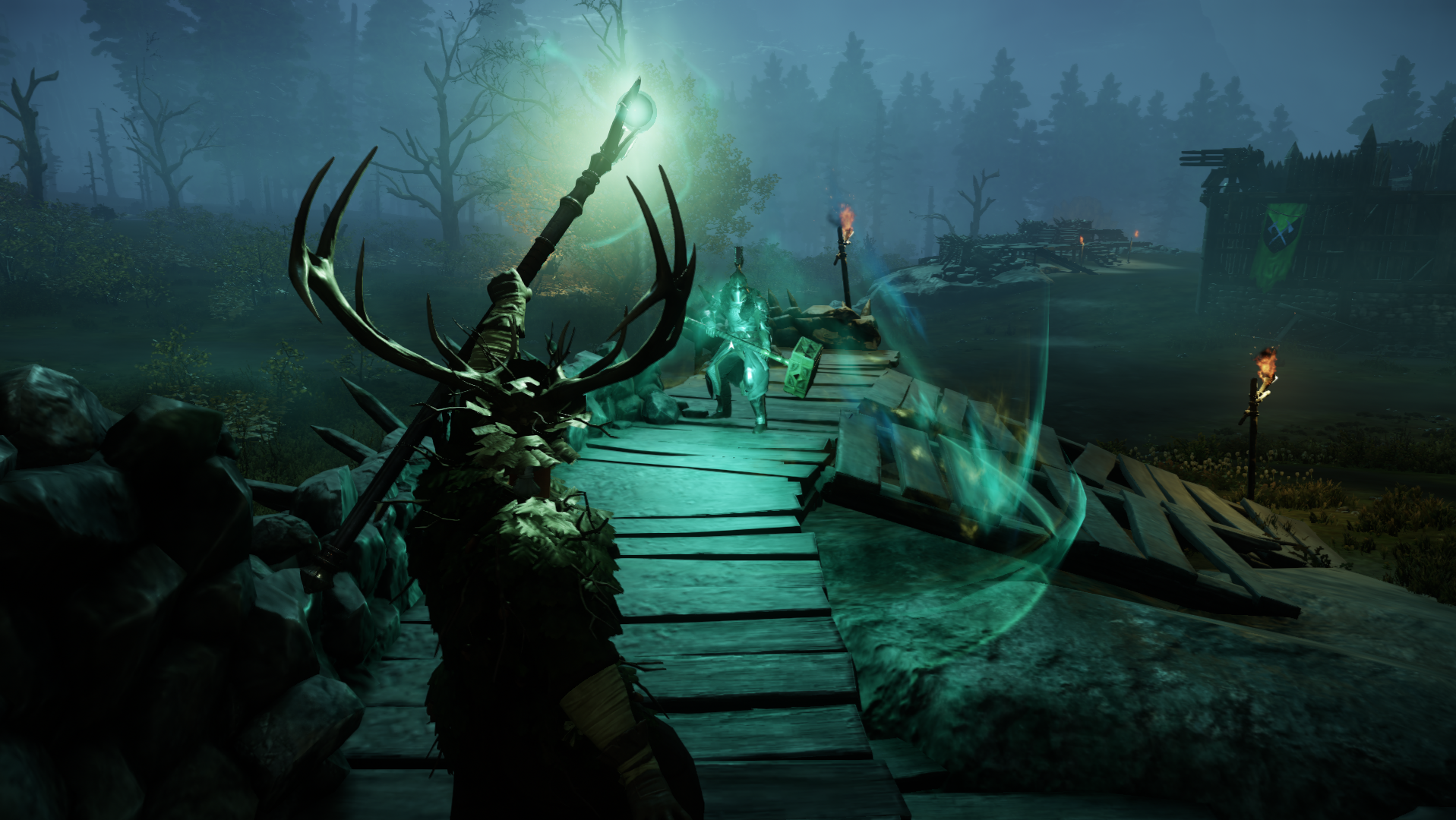 The life staff fully scales off of the Focus attribute at 1.0X. This means that for every point in Focus, the life staff will gain 1 full weapon damage. In a 500 attribute total build, the recommended attribute distribution is:

250 Focus and 250 Constitution will give life staff users a great blend of both a larger health pool as well as the power to effectively utilize and heal with that amount of health. Life staff users can truly take advantage of the 250 Constitution bonus by having a reliable way to heal to full health regularly. An ability like Reap for example, can heal a greataxe user, but it will likely not be enough healing to top up a player to take benefit from a bonus like this. With the combination of the Absolved passive, and passives that increase healing like Bend Light, or Protector’s Strength paired with the 50, 100, 150, and 250 Focus attribute bonuses, life staff users will be very mana efficient.

Increase healing power by 37% for 5 seconds if Orb of Protection heals an ally with no active buffs.

Accelerating Light’s Embrace is a mandatory ability perk that is made for PvP. With a 4 second ability cooldown and a 3 second 23% haste bonus, Accelerating Light’s Embrace has an amazingly high up-time. Fortifying Sacred Ground gives an already heavily furnished ability an extra reason to run it. With a great Mana to Heal ratio (300% weapon damage heal over 15 seconds for 15 Mana), 100% Stamina and Mana regen, an extra 50% healing from all sources, and the ability perks 14% fortify, Sacred Ground is a hard ability to pass up.

Post Views: 19,638
We use cookies on our website to give you the most relevant experience by remembering your preferences and repeat visits. By clicking “Accept All”, you consent to the use of ALL the cookies. However, you may visit "Cookie Settings" to provide a controlled consent.
Cookie SettingsAccept All
Manage consent