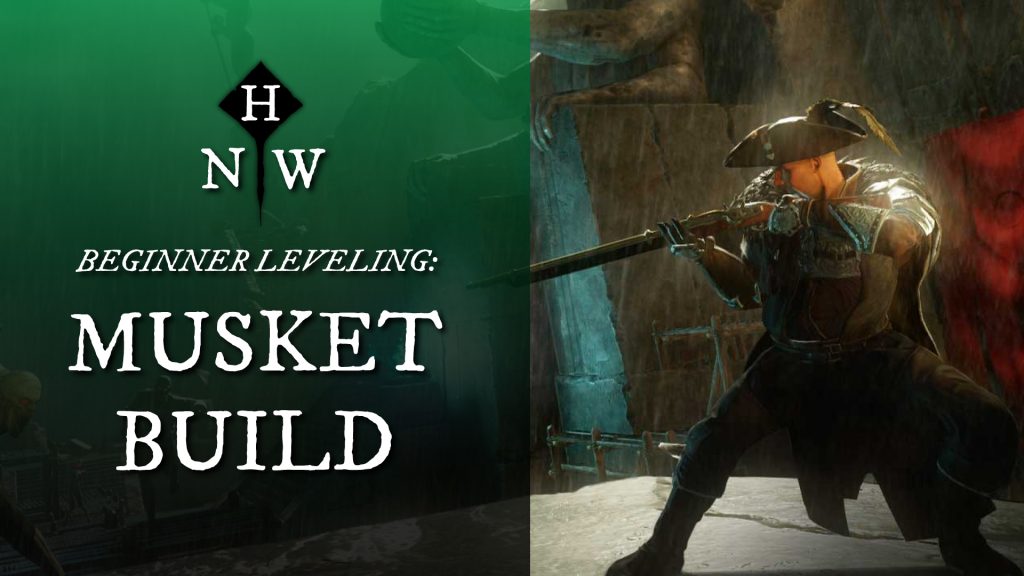 New World MMO’s musket has the potential to deal a large amount of single-target damage from long distance. With its lethal headshot damage and increased damage from long-range, the musket requires a specific playstyle and approach. Once you unlock Shooter’s Stance (3) and Heightened Precision (10), the muskets potential damage output increases exponentially. While leveling with this build, it is important to try and deal as much damage to your enemy before they get close to you. Successfully doing this will greatly decrease the chance you ever take damage. 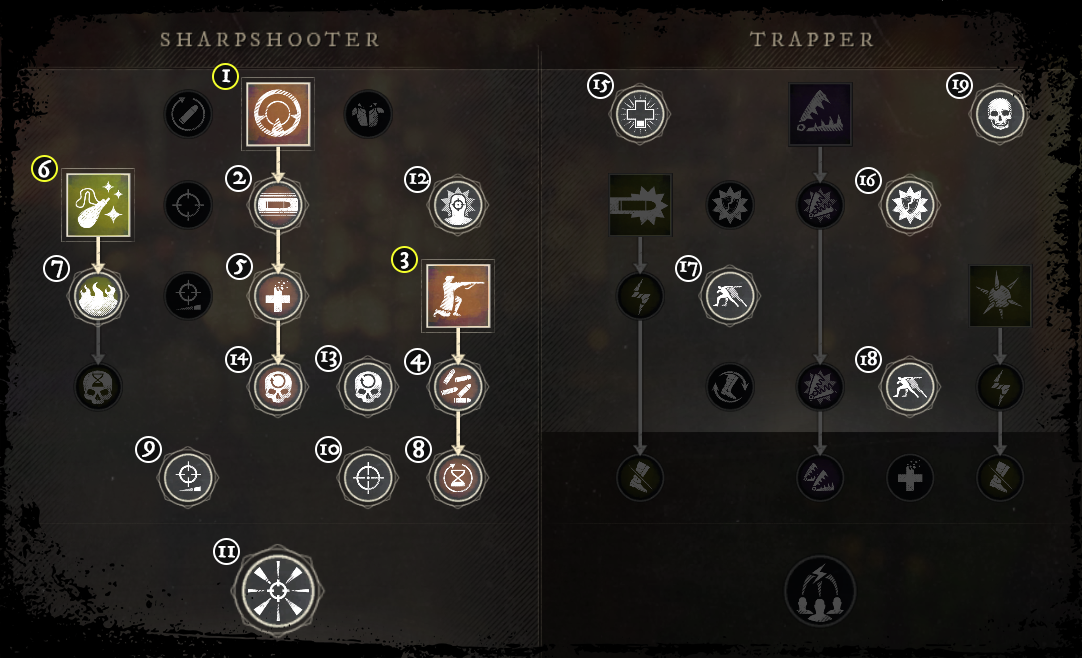 Power Shot (1) is your most basic Overloaded shot, causing your next auto-attack to deal 150% weapon damage to your target. The first passive you receive under this ability, Initial Engagement (2), will provide a noticeable difference, granting Empower and increasing your subsequent musket shots by 10% for 5s on successful hits. Engaging your target with this ability is very beneficial because of this passive, and depending on how quickly you kill your target, the 15s cooldown will allow you to almost always begin combat with this ability.

You will notice that the 2nd passive under Power Shot (1), First Blood (5), pairs very well with the 1st passive. As I stated in the basic description of Power Shot (1) above, it is key to always try and engage your enemy with this ability. After acquiring its 2nd passive, not only will it Empower the shots that follow, but it will also deal an additional +10% damage to targets with full health, totaling an impressive 160% weapon damage. The 3rd passive under Power Shot (1), Bullseye (14), is acquired later on in the leveling experience. The main reason for this is because although headshots are always beneficial, the real worth of headshots with the musket comes when obtain Empowering Headshot (12) and Called Shot Resupply (13).

Shooter’s Stance (3) will become the core ability of this build while leveling. When you press this ability, you will enter an enhanced shooting stance, completely blocking mobility but reducing your musket reload time by 75%. The weapon damage of your auto-attacks stays the same (100%) but you are allowed the liberty of Overloading your shots prior to entering the stance and the ability to zoom in from Sniper (11).

Shoot More (4) is a basic upgrade to this ability, increasing the potential shots fired from three to five. A big reason the 1st passive is important is because it pairs well with the 2nd passive, Marksman (8), which reduces all other musket cooldowns by 25% if 3 consecutive shots hit the same target. The best way to secure the 3 consecutive hits is by Overloading your musket with Power Shot (1), enter Shooter’s Stance (3), and aim at the head of your enemy – because you haven’t pulled the target yet, they should be standing still, allowing you the opportunity to hit them 3 consecutive times in Shooter’s Stance (3). Another key thing to keep in mind with this ability is that you can enter the stance and exit the stance without the ability going on cooldown – but if you enter the stance and shoot at least one time, the ability will go on cooldown.

As Power Shot (1) is the ability you will use to engage your enemy, Powder Burn (6) serves as your biggest damage dealing ability, boasting an impressive 290% weapon damage after the 9s of its Burn status effect. Because you can’t load an Overloading shot during Shooter’s Stance (3), it would be most efficient to shoot all 5 shots of Shooter’s Stance (3) before Overloading your musket with Powder Burn (6).

As you begin leveling with the musket, you may feel underwhelmed by its damage output – do not let this stray you away from the weapon, though, as its potential greatly increases as you obtain a few key abilities and passives. Effectively using the musket will allow you to quickly kill enemies with little to no risk of being hit.

An advantage the musket has among almost every other weapon in New World is its potential to headshot your target. Not only are headshots automatic critical strikes, but a few of the passives in this build improve headshots by offering unique buffs. These passives are Sniper (11), Empowering Headshot (12), and Called Shot Resupply (13). The first of the three passives you’ll receive is Sniper (11), allowing you to zoom in 3x for all musket shots and granting a 15% damage increase to all headshots. Although the headshot damage increase is impressive, the 3x zoom that this passive allows provides great utility. The 3x zoom will allow you to better achieve two things – securing the hit on a target from longer range and making it easier for you to hit a headshot on your target. The second passive that benefits headshots is Empowering Headshot (12). Once you obtain this passive, successful headshots will grant a 10% Empower for 5s. Since you will have Sniper (11) and Shooter’s Stance (3) by the time you obtain this passive, headshots will be easier than before. Because of that, maintaining the 10% Empower throughout combat should always be achievable. The last headshot passive, Called Shot Resupply (13), reduce all musket ability cooldowns by 10% for each standard attack headshot. Although Powder Burn (6) and Power Shot (1) won’t proc this passive, a 10% musket ability cooldown reduction on successful standard shots is a must-take. For all three of these passives, successful headshots while in Shooter’s Stance (3) will be substantially easier than before.

As a musket user, long-range combat will quickly become your best friend. It is important to be aware of the fact that musket is the only weapon in New World that has a hitscan mechanic. Hitscan means that there is no travel time for the bullets that you shoot. This is especially important for your long-range shots after you obtain the Hit Your Mark (9), which increases your headshot and critical hit damage the further away your target is – specifically up to 15% on a target 100 meters away. With hitscan, successful headshots with the musket at long-range are easier when compared to the bow. Keep in mind that because we aren’t taking the Ballistic Advantage passive due to its low value, the musket damage begins to fall off after 50 meters.

This build provides a number of Empower buffs, all synergizing very well together. We have already touched on a few earlier, but all possible Empower buffs proc from Initial Engagement (2), Empowering Headshot (12), and Empowering Shooter’s Stance (a weapon ability perk we’ll go over later in this guide). As a standalone buff, Empower is especially effective for longer engagements with enemies where you can benefit from the entire duration of Empower. With all three Empower buffs active, you can gain a potential 42% damage increase. Another essential passive we will be taking in this guide is Heightened Precision (10), where successful hits while aiming grants a stacking 2.5% damage increase with a max amount of 6 stacks. The damage buff from this passive ends when you stop aiming down sight or more than 5 seconds passes between shots; because this passive ends when you stop aiming down sight, it would be most efficient to proc this passive while using Shooter’s Stance (3). 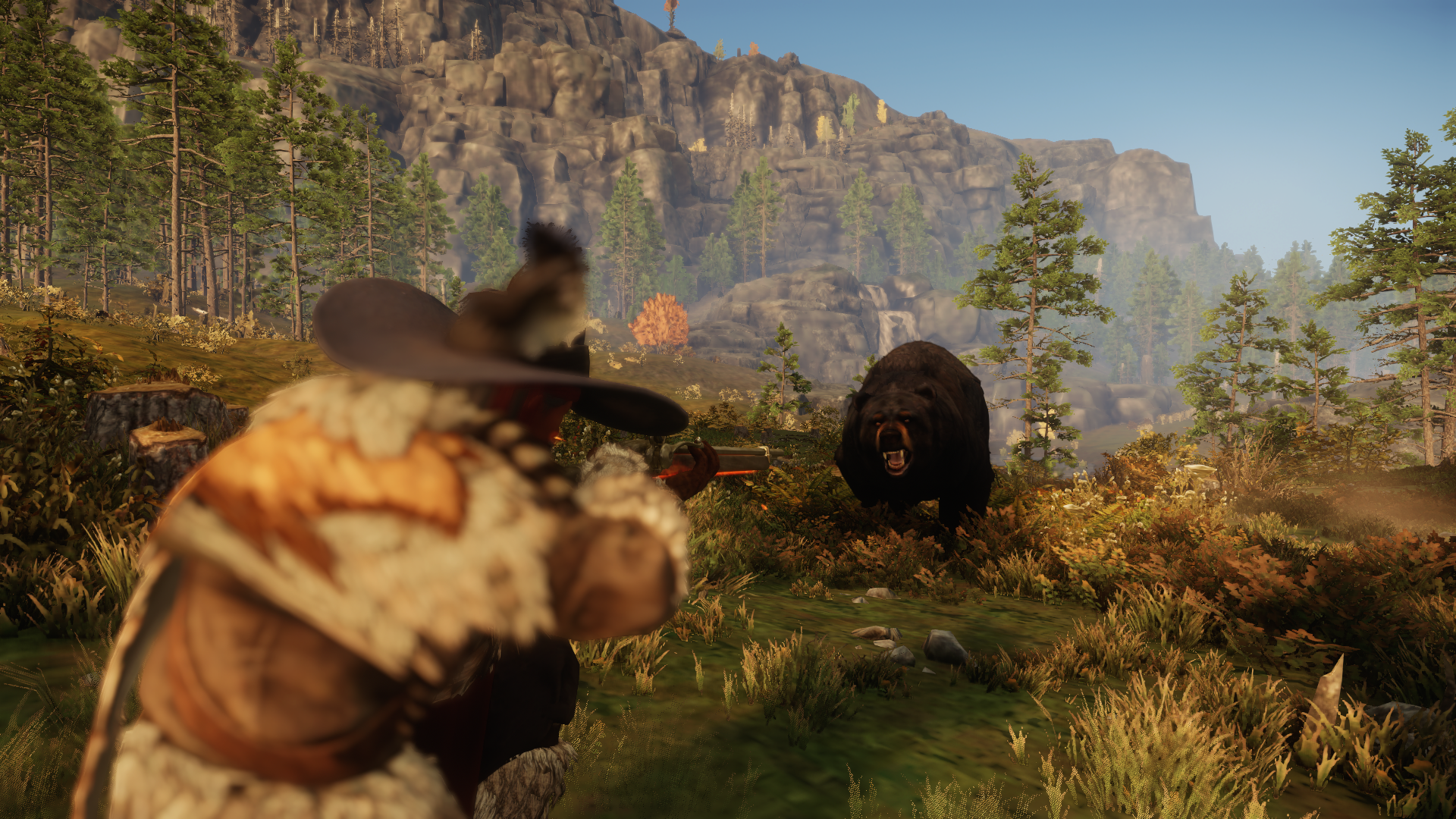 The musket primarily scales off of the Dexterity attribute at 0.9X and secondarily off of the Intelligence attribute at 0.65X. This means that for every point in dexterity, the musket will gain 0.9 weapon damage, and for every point in intelligence, the musket will gain 0.65 weapon damage. For this build, we recommend taking advantage of the Dexterity attribute for a few of its attribute bonuses. The standout attribute bonus is the one received at 200 Dexterity: +10% bonus backstab and headshot damage. This bonus is especially important for this build because of the importance of headshots not only because of its raw damage increase, but because of the passives that proc from successful headshots. The most important attribute threshold bonuses are listed below:

Constitution is an attribute that will be inevitably beneficial to you while leveling, as it increases your total health pool and provides substantial attribute bonuses. Specifically, the attribute bonus received at 50 Constitution makes all health consumables +20% stronger. As you begin leveling, you will quickly realize how important health potions and food is on your journey. Making all health consumables 20% stronger will make the difference when trying to survive in the open world.

Targets hit with Powder Burn are slowed by X% for 5s

Out of all three ability perks, Empowering Shooter’s Stance is the only viable perk when compared to the other general weapon perks. Refreshing Power Shot is an inefficient weapon ability perk because the ability and its passives incentivize its priority as the first ability you use against an enemy. Killing a target with Power Shot (1) is not only very unlikely, but also counterintuitive. The main purpose of Power Shot (1) is its increased damage against full health targets and its Empower – it should not be used as a kill shot. Although Crippling Powder Burn provides a X% slow that can be used effectively in specific situations, obtaining other general perks would be more beneficial while leveling.

Shooter’s Stance (3) is a strong and low-risk ability perk. With this build, you’ll have 5 shots (or chances) to proc this ability perk and gain the X% empower for 3s. Out of all of the weapon ability perks, a X% damage increase is one of the highest and it just so happens to affect an ability that you will be using consistently in all forms of combat.

Post Views: 15,890
We use cookies on our website to give you the most relevant experience by remembering your preferences and repeat visits. By clicking “Accept All”, you consent to the use of ALL the cookies. However, you may visit "Cookie Settings" to provide a controlled consent.
Cookie SettingsAccept All
Manage consent