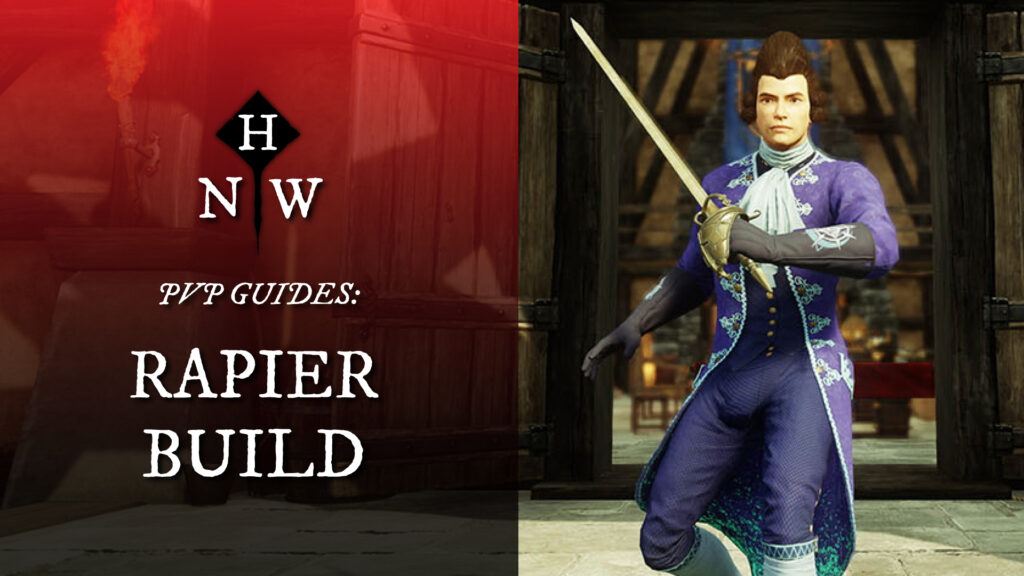 The rapier in New World is an agile 1-handed weapon that uses quick strikes to deal massive amounts of damage. With one of the highest melee damage ceilings in the game, while also packing some decent utility, the rapier will be used in combination with many different weapons and see success. Many players will find that the rapier excels in smaller scale PvP rather than large scale combat like territory wars due to its heavy single target nature. 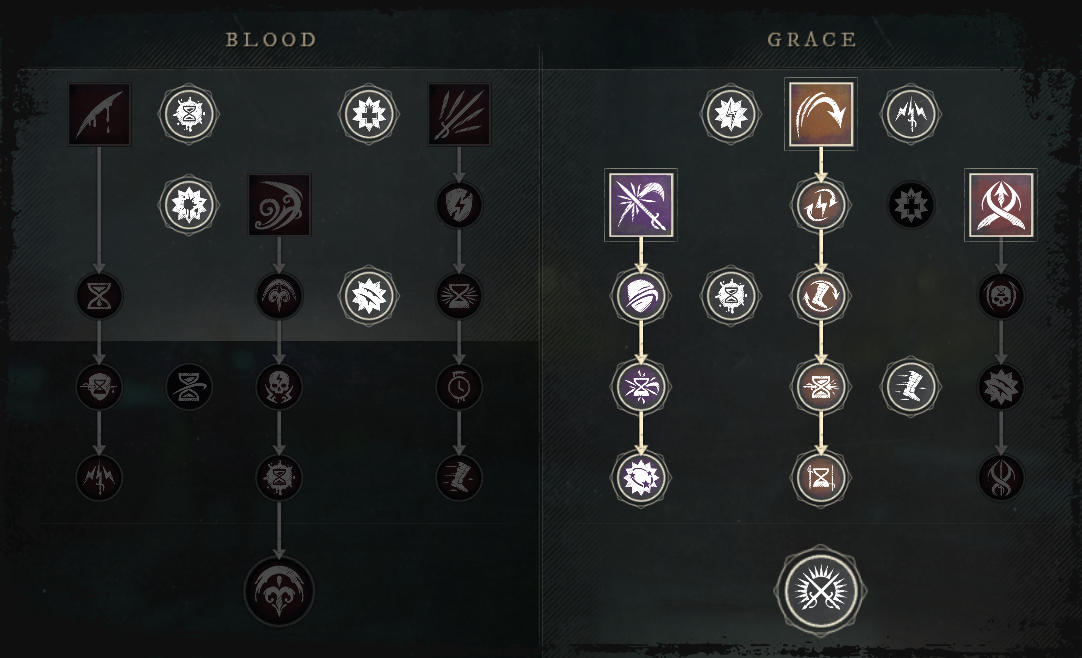 Evade is the Grace tree’s bread and butter ability. With a short cooldown, high burst damage, and the capacity to dodge enemy abilities and attacks, Evade is an incredibly powerful ability that has a very high skill ceiling. This entire build is built around using Evade to advance upon and mix up your opponent. Because the Evade cooldown is so short (6 seconds), and each of the four passives under Evade bring so much value to the table, Evade becomes a powerful tool. Crescendo is by far the best passive under Evade, cutting the already low cooldown of 6 seconds into a fraction of that.

Riposte is a mandatory pick up for the Rapier in most PvP builds. When an attack is blocked with Riposte, the rapier player takes none of the damage from the attack, becomes invulnerable for a short period, and follows up the counter with a 2 second stun (after taking the passive Lasting Consequence). Pro Tip: This 2 second stun is just enough time to quickly dodge behind your opponent and perform a heavy attack strike with backstab damage. Riposte will be used by high level players to avoid hard cc and high damaging abilities.

Since the Rapier is a melee weapon and may have some troubles staying within reach of opponents, Fleche is a fantastic catch up tool that also happens to do a significant amount of damage. High level Rapier players will be looking to use Fleche to purposefully end up directly behind their opponent, opening up the possibilities for some serious backstab damage.

Because the Quick Lunge passive is so undesirable, it disincentivizes us to place any points into Fleche passives. Using Fleche purely for the utility that it brings as a gap closer is more than enough to make this ability viable.

In PvP, the Grace tree brings some extremely high value abilities in the form of Evade, Riposte, and Fleche, which is why all three are taken in this particular build. In order to be a successful Rapier player in PvP, understanding advanced mobility mechanics is imperative. The high power level of the Rapier comes in the form of staying up close and personal with the opponent while using Evade to mix up and dish out massive damage. Rapier players should not mistake Evade for a spammable ability. Evade should be used to not only get behind the opponent, but also be saved to dodge crucial abilities. Since Crescendo and other cooldown reduction passives help to bring Evade off of cooldown relatively quickly, players will need to manage and critically think about what their opponents are bringing to the engagement in order to decide how they are using the Evade in certain situations.

The reason why the Rapier has such a high skill cap is because of the difficult but valuable nature of both Evade and Riposte. At face value, Riposte is simply a stun that is activated from an opposing player attacking the Rapier player. However, the most important reason why Riposte is such an important skill to have in PvP is because it fully negates the damage from any attack or ability when used successfully. This allows highly skilled Rapier players to save and hold Riposte if they know that their opponent has a high impact ability off of cooldown. Riposte can also come in handy when their foes use certain space creating, or gap closing abilities like Burn Out or Fleche which their opponents will be using through them to create space and damage at the same time. Riposte can be used in these situations to stop players from using these abilities in their tracks, while at the same time, negating the damage, and stunning the opponent, making sure that the Rapier player stays within close proximity to the opponent.

Fleche is an amazing gap closer that can be used in many different ways. Skilled Rapier players will practice using Fleche as a means to not only gap close, but to also end up directly behind their opponents, increasing the likelihood of getting off multiple backstab amplified light attacks with Evade. Another way that Fleche should be used is to counter space creating abilities like Burn Out, Charge, and Evade Shot. If a Rapier player is facing a Fire Staff user and knows that the player has Burn Out off of cooldown, the Rapier player should hold onto Fleche in order to instantly counter the inevitable attempt of the Fire Staff user to create space. Once the Rapier player has closed the gap by sprinting or dodging, the Fire Staff user will most likely use Burn Out to escape. In this situation, Fleche should be used in the exact same direction in order to stay close to the mage. 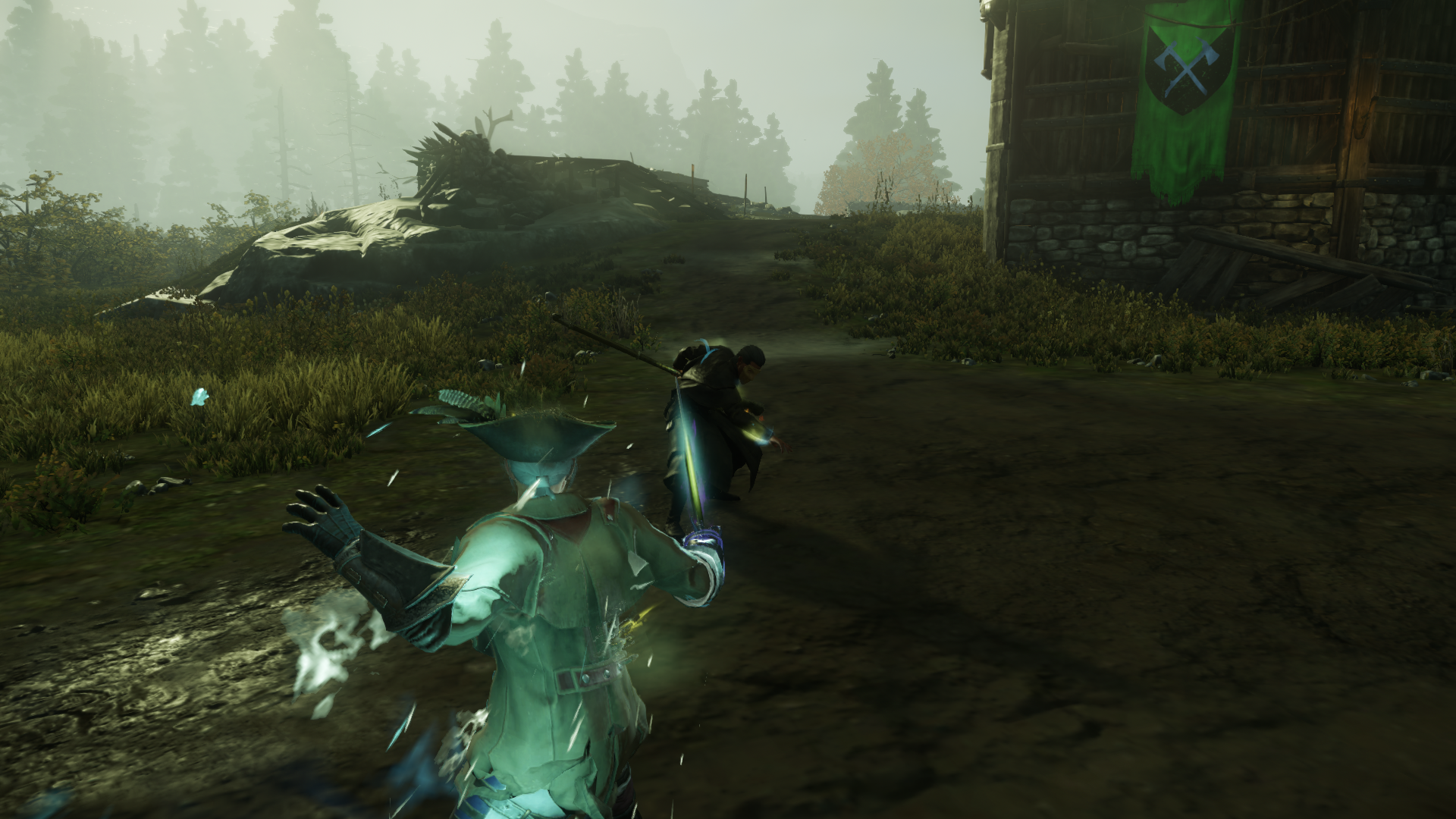 This attribute allocation takes the best of both the Dexterity and Intelligence attribute bonuses while curbing the negative impact of attribute diminishing returns. Since the rapier does a ton of damage and has the tools to get behind opponents, the 50, 150, and 200 Dexterity attribute bonuses, as well as the 100 Intelligence bonuses will aid in making the rapier a high damage weapon. 200 Constitution will allow the rapier player to acquire a decent health pool while gaining some crucial PvP defensive bonuses like 10% reduction to crit damage taken.

Riposte grants Rend, reducing damage absorption of the target by 14% for 10 seconds.

Hitting a target via a Crit Backstab with Fleche reduces this ability’s cooldown by 19%.

Sundering Riposte and Omnidirectional Evade are fantastic weapon ability perks in certain situations. Sundering Riposte’s 14% Rend for 10 seconds is huge and is more valuable against melee players since the Riposte stun needs to land for the Rend to be applied. Riposte can be used to negate the damage from a ranged attack, however, if the Rapier player is out of range of the ranged opponent, the Riposte stun and Rend can’t be applied.

Since Evade has such a short cooldown, Omnidirectional Evade could be a good weapon ability perk option. The only issue with the base Adagio skill is the fact that the forward Evade is short and that a side Evade is much more valuable in terms of mixing up the opponent and looking for backstab damage. This perk ultimately allows Evade to become much more versatile without losing the very important damage increase from Adagio.

Post Views: 14,963
We use cookies on our website to give you the most relevant experience by remembering your preferences and repeat visits. By clicking “Accept All”, you consent to the use of ALL the cookies. However, you may visit "Cookie Settings" to provide a controlled consent.
Cookie SettingsAccept All
Manage consent