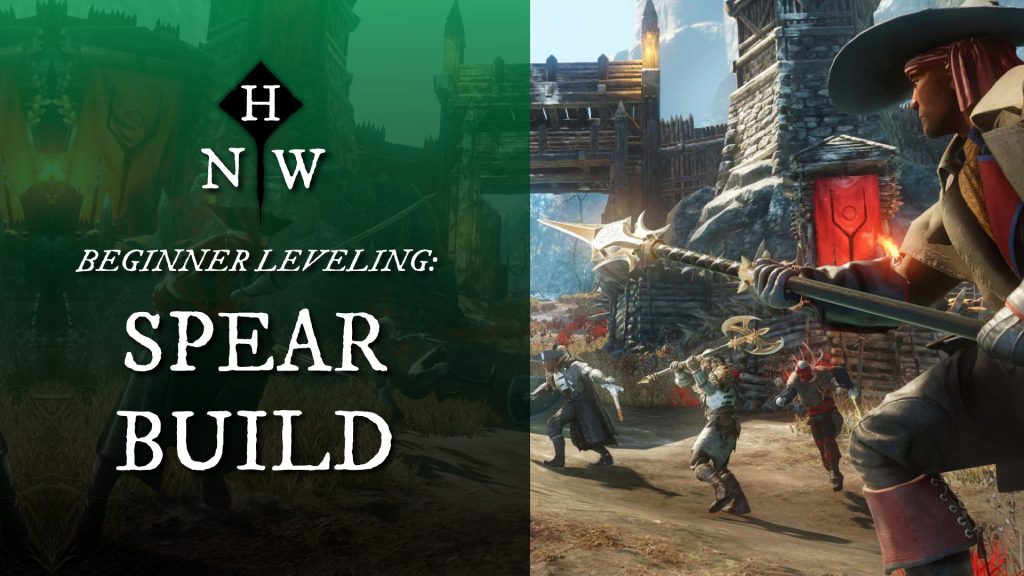 New World MMO’s spear provides high damage while leveling through its Bleeds, Rend, and ability cooldown reduction. The final passive in the Impaler tree, Exploited Weakness, will be the focal point of this build, as it will be your major damage buff and works incredibly well with the abilities and passives we will be taking. Leveling with the spear feels very fluid and you quickly unlock a strong potential through Aggressive Maneuvers (7) and Perforate (2). 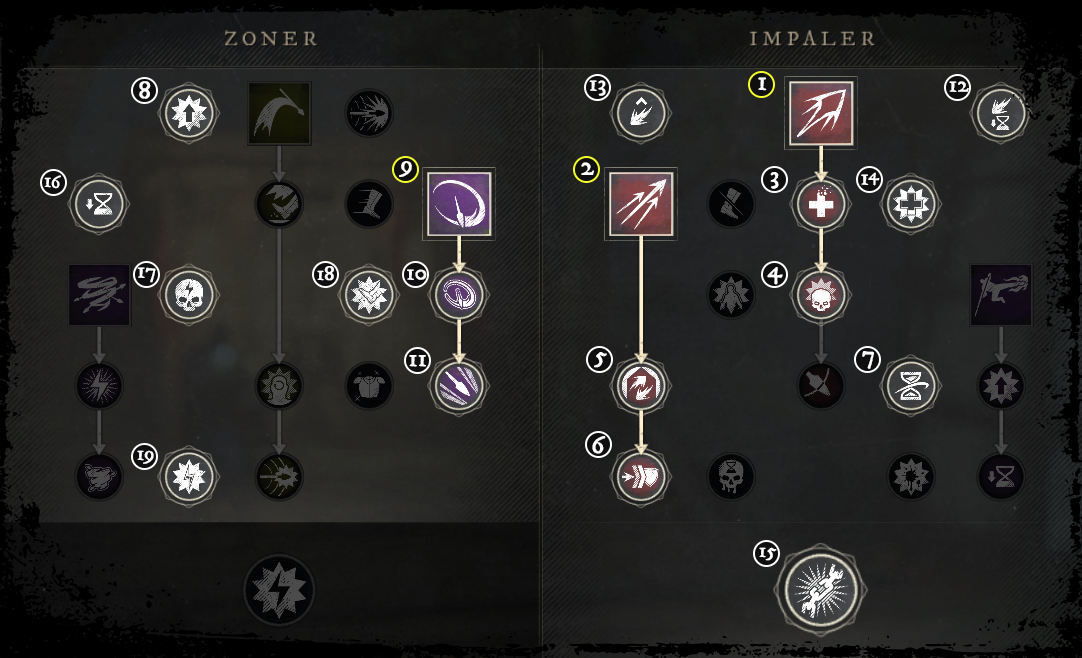 Skewer (1) will be the ability you use to engage your target and close the gap between your ranged enemies. Upon taking the first passive under Skewer (1), Deadly Ambush (3), you will notice a substantial damage increase with this ability. This is because Deadly Ambush (3) increases its damage by 20% against targets with full health – and using Skewer (1) efficiently means using it as the first ability of your combination.

The second passive you will receive under Skewer (1), Follow Through (4), provides a very substantial 20% Empower (increases your total damage). As you level, most of your attribute points will go towards Dexterity. At the 50 Dexterity attribute bonus, you will receive a 5% increased chance to critically strike (more on Dexterity on attribute bonuses in the Attribute Distribution section of this guide). This attribute bonus will increase the chance you critically strike with every attack, including Skewer (1), increasing your chance to receive the 20% Empower from Follow Through (4).

The second ability you will take, Perforate (2), will quickly become your main damage dealing ability. All three strikes deal 70% weapon damage and applies a 5% Rend (decreases damage absorption of your opponent) for 10s, totaling 210% weapon damage and 15% Rend for 10s if you successfully hit your target with each strike. As your leveling, you should almost always hit your target with all three strikes of Perforate (2). Also, a key tactic while using this ability is to dodge behind your enemy and aim this ability towards their back, guaranteeing a crit for all three strikes.

Both Perforate (2) passives are a must-take, each buffing separate beneficial aspects for leveling. The 5% increase on each Rupturing Strikes (5) on targets above 50% health will now total a possible 30% Rend. The reason that this passive is so important is because Perforate (2) should be the second ability you use after Skewer (1), meaning your target will always be above 50% health. Even though your target may fall below 50% after the completion of Perforate (2), the 10%-30% Rend (depending on successful strikes) will stay for 10s. The 2nd passive you will receive, Impactful Strikes (6), pairs very well with the 1st because they both incentivize a successful completion of all three strikes. After receiving the Impactful Strikes (6) passive, timing a successful 3-strike Perforate (2) while your enemy is casting an ability will be most efficient, as it will interrupt their cast.

Not only will Sweep (9) be your only CC ability, it will also serve as your main AoE ability. When you begin leveling with Sweep (9), you will quickly notice that it has a frontal cone hitbox – this is what makes it an AoE ability. When pulling more than one enemy, use Sweep (9) when they’re both in front of you to hit both targets. Although it only boasts a low 75% weapon damage, the knockdown CC will come in handy when trying to survive.

Acquiring both passives add GRIT (unable to be interrupted) to Sweep (9) through Tenacious Sweep (10) and a modified Basic Attack through Coup De Grace (11). Adding GRIT to Sweep (9) will increase your survivability by guaranteeing you complete this ability and knockdown your enemies, giving you time to either heal up or abandon combat. Although Coup De Grace (11) seems like a single-target Basic Attack, you are actually able to hit more than 1 enemy with it if used correctly. When pressing Basic Attack during Sweep (9), try to aim your crosshair towards the middle of the enemies in front of you to guarantee a multi-target Coup De Grace (11).

As your leveling with the spear, the most important factor of this build is its focus on status effects (i.e., Bleeds). Naturally, two of your three abilities, Skewer (1) and Perforate (2), applies a status effect to your enemy. The reason I say naturally is because Skewer (1) can also apply a Weaken if you augment a piece of armor with the Enfeebling Skewer ability perk (more on this in the Weapon Abilities Perk section). The reason that applying status effects to your enemies is important is because of the ultimate passive you receive in the Impaler tree, Exploited Weakness (15). This passive increases your damage by 10% for each debuff (or status effect) on your target. Right off the bat, Skewer (1) and Perforate (2) will apply Bleed and Rend, respectively, to your target, increasing your total damage by 20%. Keep in mind that the damage increase from Exploited Weakness (15) also accumulates from separate debuffs (Disease, Root, etc.) applied by other weapons. After acquiring this passive, you will notice a major power spike in your damage output – because of this, always keep an eye above your enemy’s nameplate to ensure that you have applied as many debuffs as you can.

Each weapon in New World provides six possible abilities, each with their own purpose. For almost every single situation, the abilities you choose will be the main way you deal damage. Because of this, it is detrimental to your survivability that these abilities be available as often as possible. The best way to accomplish this is by ability cooldown reduction. The passives that will aid you in ability cooldown reduction with this build are Aggressive Maneuvers (7), Refreshing Jabs (12), and Refreshing Reach (16). All three of these passives serve their own purpose but once each are acquired, your abilities cooldowns will be reduced very consistently through light attack chains, heavy attacks, and dodging.

After acquiring Deadly Consistency (8), incorporating heavy attacks into your rotation will begin to feel invaluable. This passive increases heavy attack damage by 10% on consecutive heavy attacks made against a single target. As you’re leveling through Aeternum, you will consistently run into named enemies that will have more health and deal more damage than normal. For these named enemies, single-target damage, like the heavy attack combined with the Deadly Consistency (8) passive, will be very effective. Once you obtain Sweep (9), you now have the opportunity to knock down your enemy, roll behind them, and strike them with 2 or more consecutive heavy attacks with an increasing 10% damage buff on those heavy attacks. Another powerful tactic that this build provides against strong enemies is to apply Bleed and Rend from Skewer (1) and Perforate (2) and keep them at a distance as the Bleed slowly reduces their health.

The spear light attack chain, a combination of two quick jabs, is most efficiently used when trying to dish out quick damage with the possibility of dodging if need be. Although you can cancel the light attack chain after its first jab, Refreshing Jabs (12) incentivizes the completion of the chain with a 10% spear ability cooldown reduction. When deciding between a light attack chain or heavy attack, pay close attention to what your enemy is going to do next. If you are in danger of getting hit with a heavy attack or spell, hitting your enemy with a light attack chain and dodging could be most effective. If your enemy has just missed an attack, striking them with a heavy attack(s) could be most effective. The best way to avoid danger is to pay attention to what your enemy is doing or what you think they will do next. Deciding which form of auto-attack to mix and match with your abilities is imperative to efficient and proper leveling. 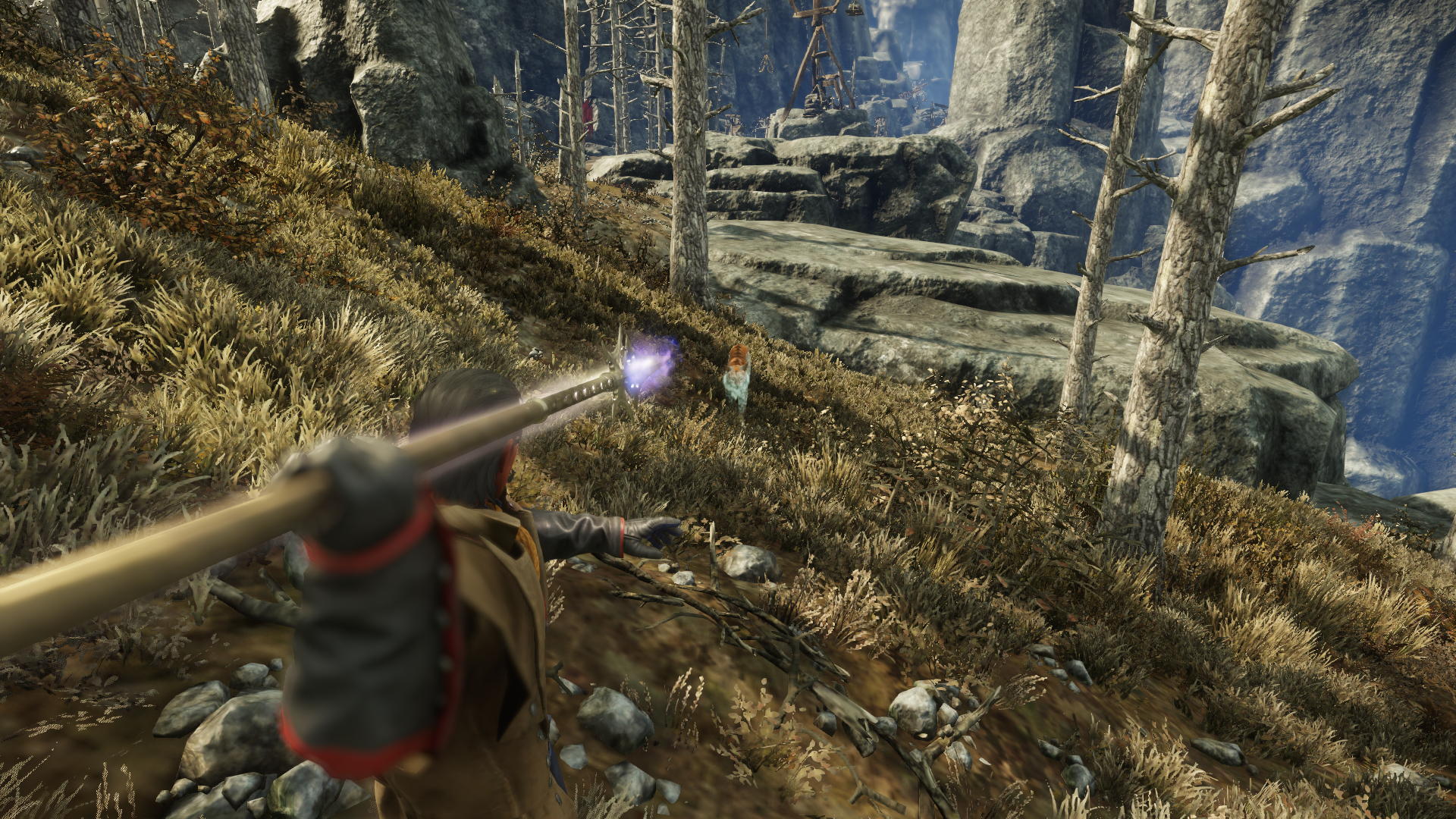 The spear primarily scales off of the Dexterity attribute at 0.9X and secondarily off of the Strength attribute at 0.65X. This means that for every point in dexterity, the spear will gain 0.9 weapon damage, and for every point in strength, the spear will gain 0.65 weapon damage. For this build, we recommend taking advantage of the Dexterity attribute for a few of its attribute bonuses. The most important attribute threshold bonuses are listed below:

At 50 Strength, you will receive a +5% damage buff to all melee weapon light attacks. This is an incredible attribute bonus because when you reach spear level 12 and 13, you will receive the Refreshing Jabs (12) and Precise Jabs (13) passives. Piling on an overall +5% damage to light attacks with these two passives make completing the light attack chain very powerful and rewarding. If you are leveling with a different Dexterity weapon as your secondary, receiving the 50 Strength attribute bonus after the 100 Dexterity attribute bonus will provide the most efficient damage boost. On the other hand, if you are leveling with a Sword and Shield or Greataxe as your secondary, acquiring the 50 Strength attribute bonus sooner than later could be more beneficial.

Constitution is an attribute that will be inevitably beneficial to you while leveling, as it increases your total health pool and provides substantial attribute bonuses. Specifically, the attribute bonus received at 50 Constitution makes all health consumables +20% stronger. As you begin leveling, you will quickly realize how important health potions and food is on your journey. Making all health consumables 20% stronger will make the difference when trying to survive in the open world.

Out of all three ability perks, Enfeebling Skewer is the only viable perk when compared to the other general weapon perks. Because of the ultimate passive Exploited Weakness (15), adding another debuff will buff your damage by another 10%. With this ability perk and this build, you can now single-handedly apply three total debuffs to your target with the spear, buffing your overall damage by 30% with Exploited Weakness (15).

Although the tooltip doesn’t specify this, the Bleed in Bleeding Sweep deals 9.3% weapon damage every second of its 4s duration, which is an extra 40% weapon damage every 4s. Because you already apply a Bleed through Skewer (1), this ability perk doesn’t have has much worth as general perks like Keen (+X% critical chance with no active requirements).

Post Views: 18,647
We use cookies on our website to give you the most relevant experience by remembering your preferences and repeat visits. By clicking “Accept All”, you consent to the use of ALL the cookies. However, you may visit "Cookie Settings" to provide a controlled consent.
Cookie SettingsAccept All
Manage consent