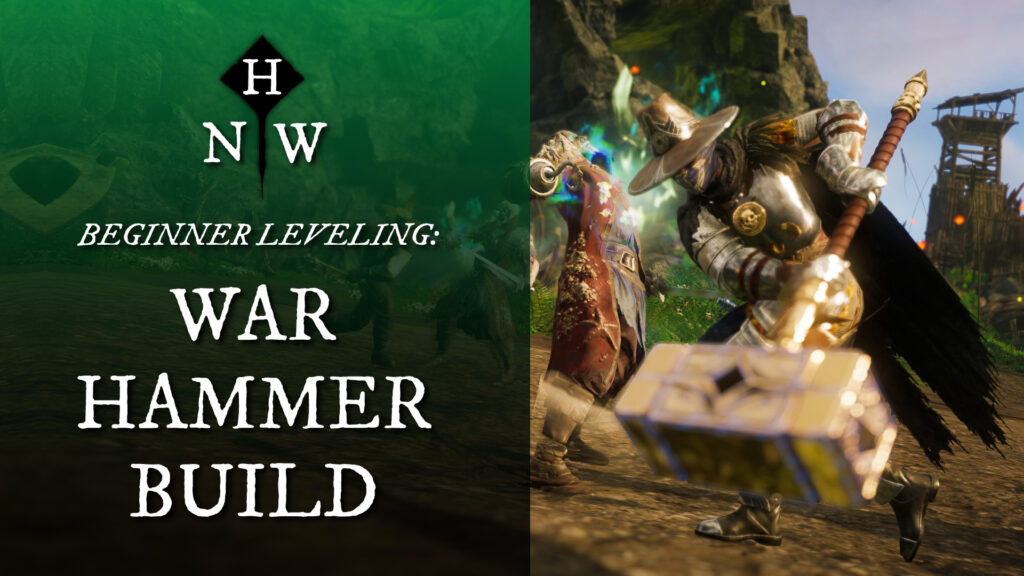 The warhammer is a top tier leveling weapon due to its hefty strong attacks, large crowd control toolkit, and health regeneration mediated by the passive Prevailing Spirit (5). Although players may find the warhammer basic attacks and abilities to have slower animations than other weapons, they will quickly learn to time their abilities correctly and weave abilities and attacks together to make the warhammer a formidable weapon. 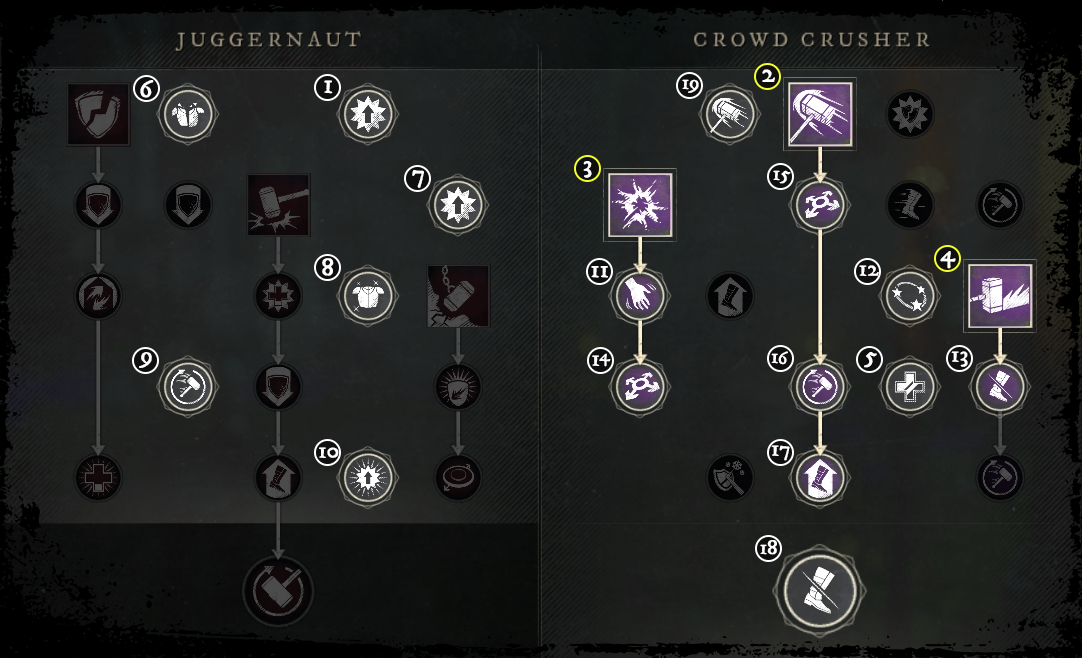 Clear Out (2) is the bread and butter of warhammer leveling abilities. With a large and forgiving swing path, decent damage scaling (115%), and a knockback and knockdown effect, Clear Out (2) should be used by warhammer players to animation cancel heavy attacks and batter their opponents.

All three Clear Out (2) passives will be amazing last minute pick-ups in this leveling build. Due to the amount of use that this ability will get, squeezing out every last bit of value will be crucial. After all three passives are taken, not only will Clear Out (2) deal damage, knockback, and knockdown, it will also help mitigate damage with Power Cleaner (15). Come off of cooldown faster when fighting many monsters at once with Clean and Refreshed (16), and lastly, give the warhammer player an amazing burst of speed to chain together monsters or approach knocked down targets.

Shockwave (3) is the meat and potatoes of what the warhammer does best; whittling down and destroying large packs of monsters. Warhammer players should look to use shockwave (3) as an animation canceling ability after a heavy attack to ensure that the maximum amount of damage is being generated.

Frailty (11) will decrease the damage that monsters do, giving the warhammer user a bit extra survivability and in turn, increasing leveling speed and efficiency. Frailty (11) will also be an additional activator of the passive Concussive Impact (12).

While Path of Destiny (4) is used as a gap-closing and interruption tool (with Seismic Waves (13)) in PvP, for leveling it is used as an extra AoE ability to burn down several monsters at once, while also keeping the warhammer player’s health topped-off through Prevailing Spirit (5). In its most effective form, Path of Destiny (4) should be used to hit as many monsters as possible since the hit limit is uncapped.

Seismic Waves (13) gives Path of Destiny (4) a bit of extra utility in the form of a stagger that will interrupt many enemies’ attacks. Although this passive proves more useful in combat with other players, the small bit of value that it does bring to a leveling build is enough to take the passive a bit later on in weapon progression.

Warhammers are at their most effective when used to burn down many enemies all at once. With Path of Destiny (4), Shockwave (3), and Clear Out (2) all being AoE style abilities without hit limits, the build’s fundamental function should revolve around hitting as many enemies as possible. Because all three abilities function similarly and apply some form of crowd control to enemies, the rotation of abilities used while leveling is not as important as weaving each ability with a heavy attack. An example of a rotation while fighting a single or pack of monsters is as follows:

When each ability is used to cancel the recovery animations of the warhammer heavy attacks, the warhammer rises from being something extremely sluggish to feeling fairly dexterous. There are a few passives that are taken in this build that warhammer players should take careful note of to maximize the damage that they are dealing. Warhammer users should make sure that the Hammer Time (1) empower bonus is active at all times while fighting monsters. Players should also realize that Concussive Impact (12) is activated by both the Frailty (11) and Aftershock (18) debuffs. Warhammer players should also always be thinking about passive Power Through Pain (10) and how they are utilizing the 1 second of 20% increased damage. Players should realize that this increase in damage will also amplify and synergize with passive Prevailing Spirit (5). After a player is hit they should try to use an ability rather than a heavy attack to regenerate extra health, unless they are already topped off. With all of the debuffs the warhammer applies, Prevailing Spirit (5) health regeneration, and the immense amount of crowd control that the weapon provides, the warhammer should help players dominate their leveling experience. 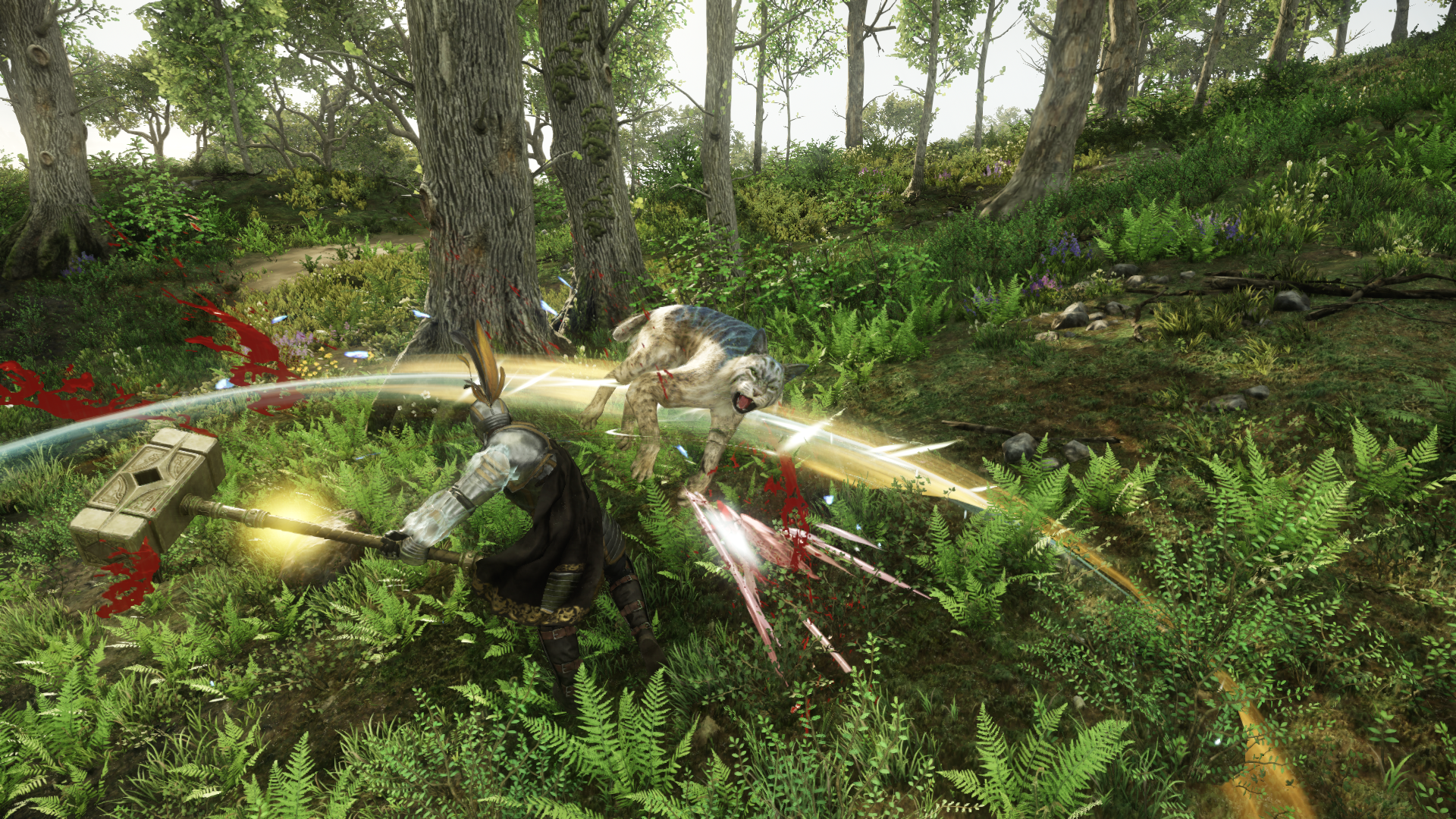 The warhammer fully scales with the Strength attribute at 1.0X. This means that for every point that a player puts into Strength, the warhammer will gain 1 full weapon damage.

Understanding that the warhammer is a melee weapon and that monsters in New World are unlike players and their attacks home-in on the players position, Constitution becomes an incredibly valuable attribute. The most important Attribute Threshold Bonuses are listed below:

Getting to both 100 Strength and 50 Constitution as quickly as possible is important for getting off to a good start with the warhammer. 50 Constitution is valuable early on because it reduces the amount of consumables that a player will need to use by a significant amount. Heavy attacks will be the dominant basic attack used on the warhammer, so 100 Strength will give players a large boost in leveling speed and performance.

Clear Out now knocks targets back an additional X%.

Heal for X% of the damage dealt from Path Of Destiny.

Both Leeching Path Of Destiny and Sundering Shockwave are viable leveling weapon ability perks. Sundering Shockwave is especially powerful because it is an AoE ability that applies a debuff, helping warhammer players to apply rend to all engaged enemies, making follow up AoE attacks much more powerful. Leeching Path Of Destiny is also a great perk for leveling, multiplexing the healing received from perk Prevailing Spirit (5).

Post Views: 20,666
We use cookies on our website to give you the most relevant experience by remembering your preferences and repeat visits. By clicking “Accept All”, you consent to the use of ALL the cookies. However, you may visit "Cookie Settings" to provide a controlled consent.
Cookie SettingsAccept All
Manage consent