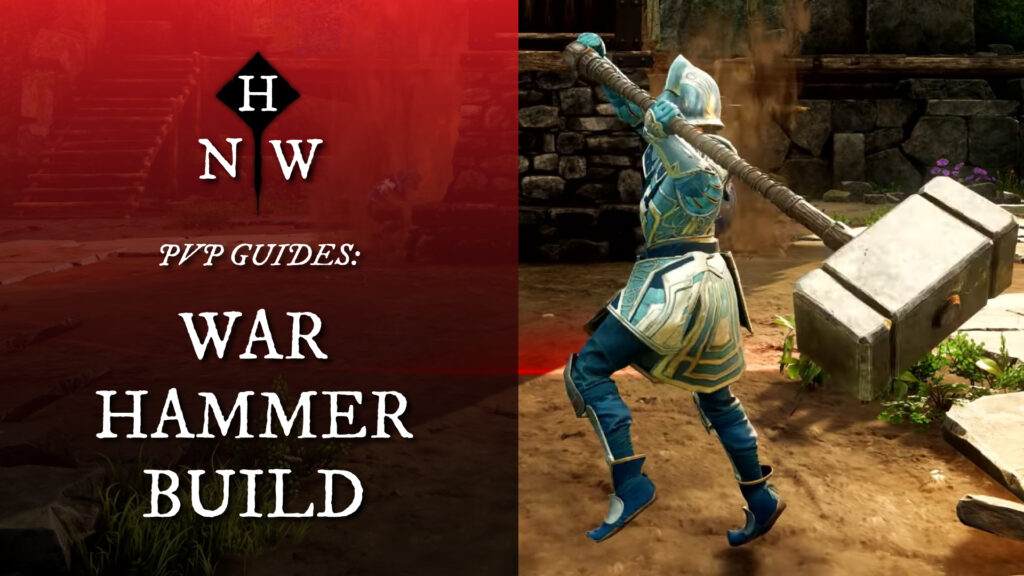 The warhammer in New World is a powerful 2-handed weapon that commands a lot of respect in PvP scenarios. With moderate damage and an amazing crowd control tool kit, the warhammer can lock down and demolish opponents in all types of PvP, especially in large-scale combat like territory wars, where AoE crowd control abilities reign supreme. 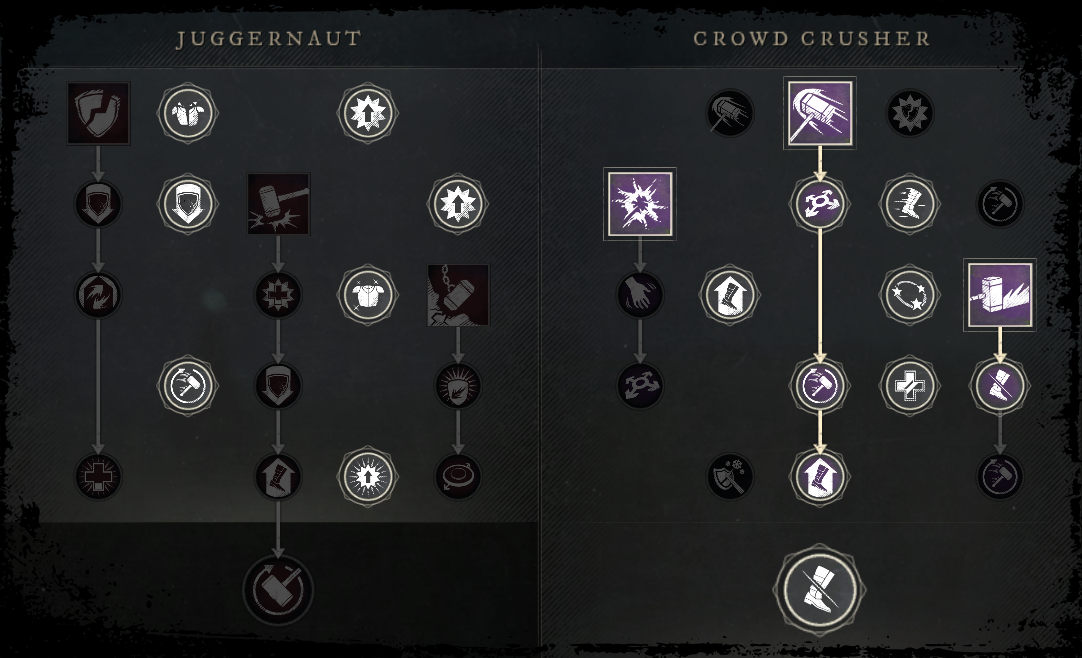 Clear Out is a wide swinging and forgiving ability that allows you to push back, damage, and knock your opponents to the ground. This ability is great to use as a counter to an opponent’s ability and following up Clear Out with an instant heavy attack is a great way to weave in some serious damage.

Shockwave is the most notable and recognizable ability that the warhammer has to offer. With a 4 meter area of effect (with Meteoric Crater passive), shockwave is an amazingly forgiving stun ability. In order to be the most successful, warhammer players should use Shockwave as a player is engaging them in close quarters combat, or use the ability in combo with Clear Out for a fantastic CC combo.

Path of Destiny is one of the loudest abilities in the game in terms of audio volume, visual appeal, and strength. With the Seismic Waves passive and Aftershock ultimate passive, Path of Destiny becomes a pseudo gap-closing ability, able to hit targets at range, stagger and slow them down for a follow-up.

This warhammer build is framed around the Crowd Crusher ultimate Aftershock, which makes all 3 of the Crowd Crusher abilities apply a 20% slow for 4 seconds. In PvP, CC effects (slows, roots, stuns, knockdowns) are extremely valuable. Being able to constantly apply a 20% slow to opponents while also punishing those players with the abilities base effects is amazing. Because we are slowing, stunning, staggering, and knocking down our opponents with all of the abilities in this build, weaving strong heavy attacks is vitally important to improving this weapon’s damage output. Passives like Hammer Time, Hardened Steel, and Contemption heavily (no pun intended) incentivize these weaved heavy attacks. A classic warhammer combo would look something like this:

Similar to other melee weapons, the warhammer relies on getting up-close and personal with its opponents, chaining together stuns and smashing them with heavy attacks. Because of this, player movement and mobility is vital. Enemies that have advanced knowledge of movement mechanics in this game can be difficult to catch and eliminate. In order to have the best chance of staying up close and personal with your foe, warhammer players should become familiar with advanced mobility mechanics themselves.

Here are some quick tips to get started: 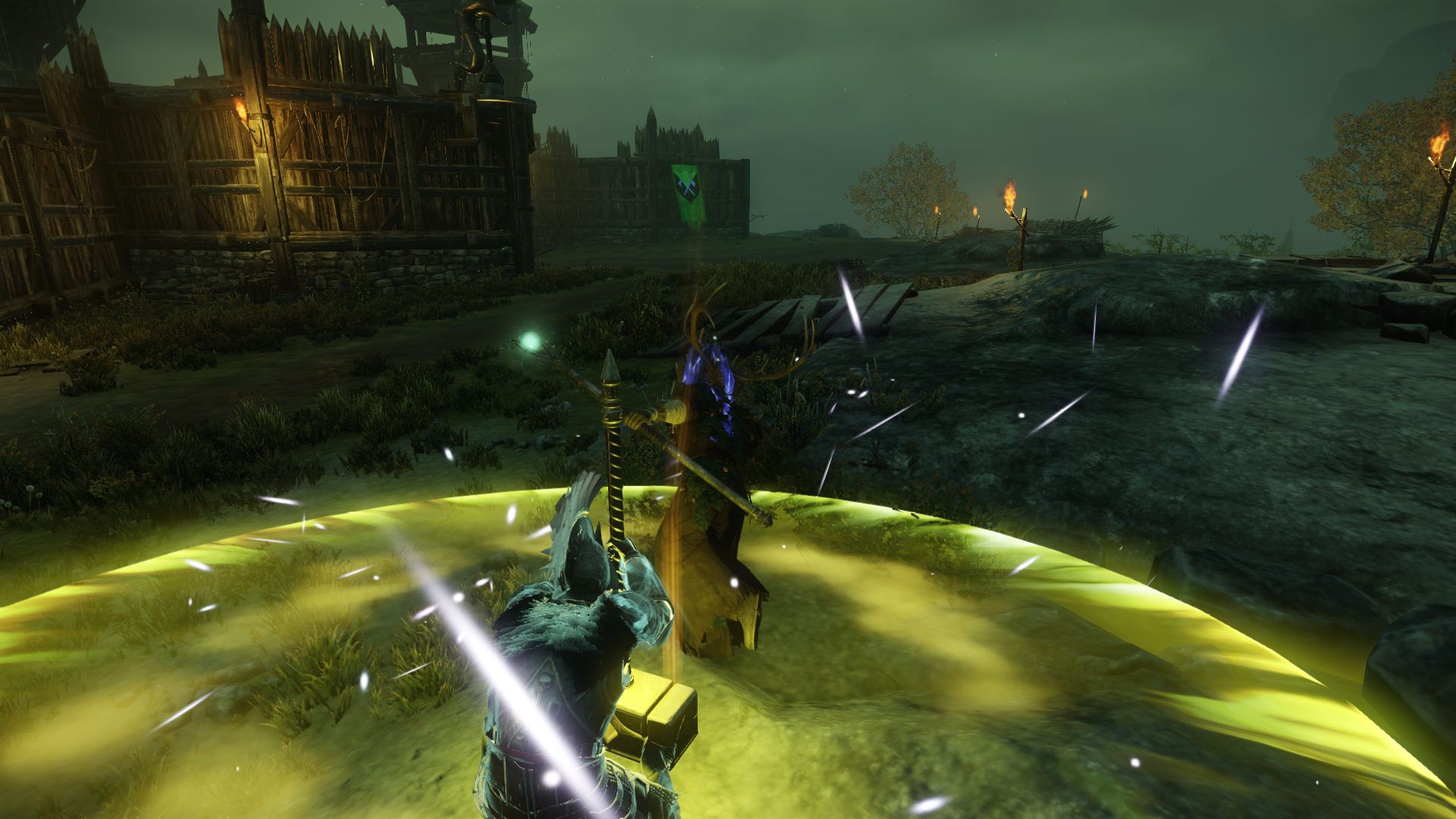 The warhammer fully scales off of the Strength attribute at 1.0X. This means that for every point that a player puts into strength, the warhammer will gain 1 full weapon damage. Since the warhammer is a melee weapon, it will be imperative that this attribute distribution has an ample amount of Constitution since you are more likely to be hit with abilities. You will also need an appropriate amount of strength and dexterity to be able to eliminate your opponents. In a 500 attribute total build, the recommended attribute distribution is:

This attribute allocation really aligns with the play style of the build. Having 300 Constitution is going to help in tough zerg style PvP matches while more importantly giving an amazing +20% duration to all cc effects which includes all Aftershock applications and Shockwave stuns. 200 Strength is going to give us just enough attribute points to give us an extra +10% damage to stunned and slowed opponents, something that we do a lot of with the warhammer, as well as +10% heavy attack damage.

Clear Out now knocks targets back an additional 141%.

Heal for 28% of the damage dealt from Path Of Destiny.

Sundering Shockwave is a very powerful weapon ability perk that will give your follow up warhammer heavy attack as well as any subsequent weapon abilities an additional 19% damage. This is a very hefty debuff that you can place on your opponents and is highly recommended for PvP.

Repulsing Clear Out is an amazingly fun weapon ability perk that allows the warhammer to smash their targets back a considerable distance, however, it is only applicable to builds that want to create space rather than gap close.

Post Views: 14,295
We use cookies on our website to give you the most relevant experience by remembering your preferences and repeat visits. By clicking “Accept All”, you consent to the use of ALL the cookies. However, you may visit "Cookie Settings" to provide a controlled consent.
Cookie SettingsAccept All
Manage consent