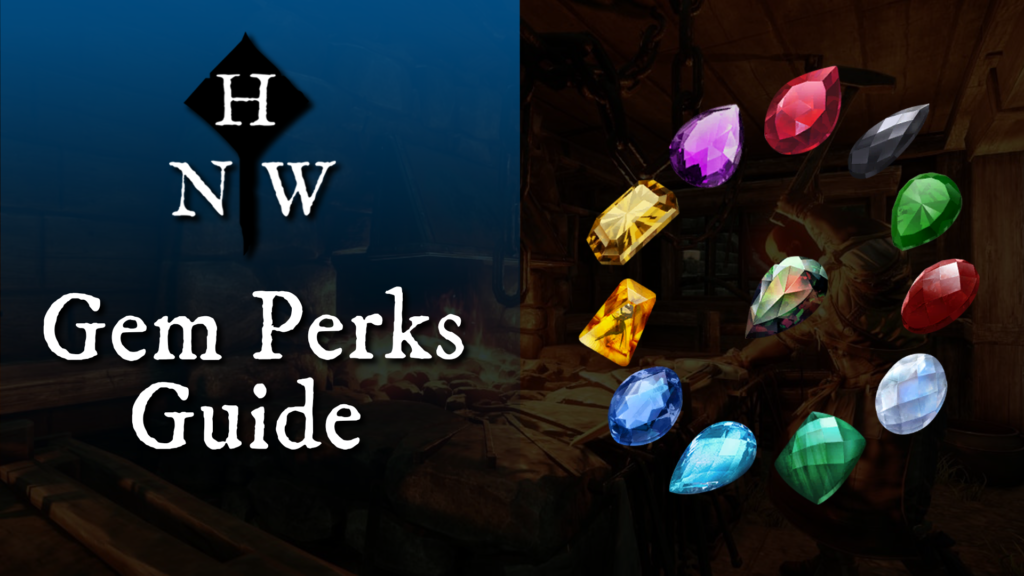 Gems in New World are part of a complex armor and weapons perk system and give character equipment customization a traditional and classic MMO feel. In this guide we are going to walk through all 14 gems that are currently in New World, speak to how they are obtained, as well as categorize them in a digestible way. The gem system in New World can be confusing for new and experienced players alike, so this guide will bring us up to speed.

Gems are powerful and rare stones in New World that give players the ability to boost the effectiveness of their equipment. To acquire a gem, a player will need to mine precious metals around Aeternum like silver, gold, and platinum. Mining these veins has the chance to drop an uncut and rough version of a particular gem. Once a player has acquired an uncut gem, like the Flawed Amber, they will need to use the stonecutting workbench to cut the gem, preparing it for socketing: Cut Flawed Amber.

As the tier of gem increases, so does the power of its perks.

When socketed into weapons, all 14 gems will give the player a unique and specific perk. To simplify and make these weapon gem perks more digestible and memorable, 4 arbitrary categories were created that give each of the gems its own place. These categories are:

For example, if a greataxe player wanted to use the ice gauntlet, they may decide to put all of their attribute points into intelligence in order to increase the damage of the ice gauntlet. Unfortunately, this wouldn’t benefit the greataxe at all since it fully scales off of strength and nothing else. In order to partially remedy the situation, the player could place an intelligence scaling gem into the greataxe, taking a portion of the weapon damage (up to 50% with tier V gem) and scaling that weapon damage off of intelligence. The leftover portion would scale off of strength like normal.

When socketed into a weapon, focus scaling gems will convert a portion of the weapons damage into a type of elemental damage. With this conversion, the gem will also allow that elemental damage to scale off of focus if it is the player’s main attribute is focus (the weapon will scale normally if not). The only focus gem currently in the game is the Amber gem:

Other than the Carnelian gem (in miscellaneous gems), the rest of the gems when slotted into weapons give perks that amplify the damage of the weapon. These perks activate in specific and unique mobility and combat situations, allowing players to customize how they would like to play their game.

The only miscellaneous gem that is currently in the game is the Carnelian. When socketed into equipment, the Carnelian gem gives perks related to threat generation. When slotted into weapons, the user will generate more threat.

Same as the weapon gem perks, when each of the 14 available gems are socketed into armor, they give the player a unique and specific perk. Armor gem perks fall under 3 categories. These categories are:

The first 6 elemental mitigation gem perks work to protect a player from incoming damage of a particular element. To make things easier, these gems protect against the exact same element that they grant when socketed into weapons. This makes it much easier to remember since a player will only need to remember the specific element that is tied to each gem to understand the perk for both weapons and armor. For example, the ruby gives a damage mitigation bonus against fire when socketed into a piece of armor or an accessory, while giving the player fire damage when socketed into a weapon. 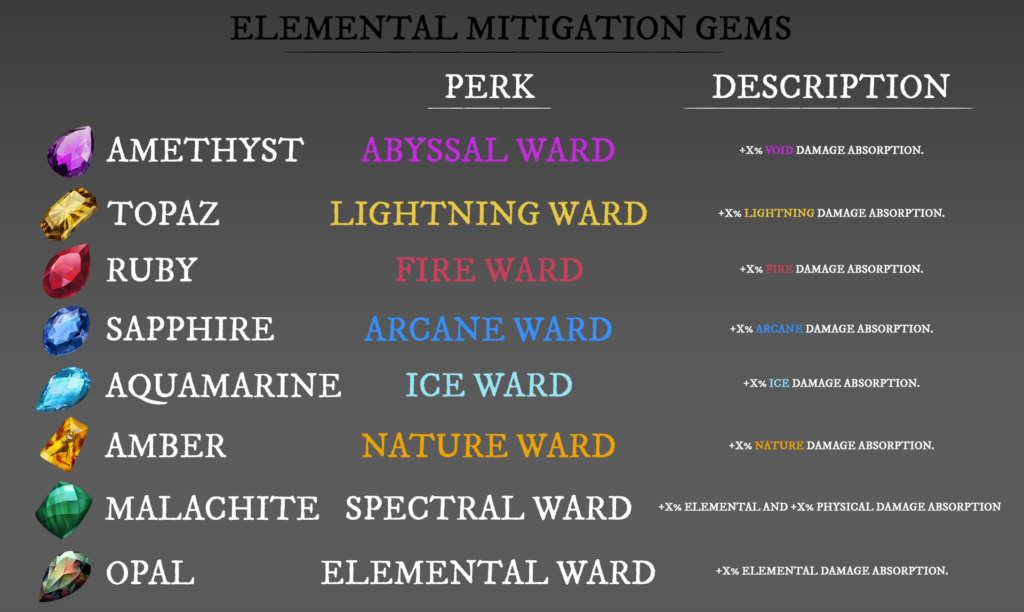 The last two elemental mitigation perk gems (Malachite and Opal) offer holistic protection against all types of elemental damage. Although these gems give players a lesser mitigation bonus, giving protection from all elements has its perks.

The only miscellaneous gem that is currently in the game is the Carnelian. When socketed into equipment, the Carnelian gem gives perks related to threat generation. When slotted into armor or accessories, the user will generate less threat on enemies.

Post Views: 13,857
We use cookies on our website to give you the most relevant experience by remembering your preferences and repeat visits. By clicking “Accept All”, you consent to the use of ALL the cookies. However, you may visit "Cookie Settings" to provide a controlled consent.
Cookie SettingsAccept All
Manage consent