Territories in New World are not only playable areas for players, but they are also dynamic areas of control that will be fought over by companies (guilds) in-game for significant reward. For more information on territory wars and controlling territories, check out our guide here(Coming Soon).  As a player adventures through Aeternum, they will be gathering, crafting, completing quests, and slaying their enemies in different territories. While they are performing all of these tasks, a player will begin to accrue territory standing experience. Territory standing experience is a progression system that rewards players for working and contributing to the economy in a particular zone. When a territory standing experience bar is filled, the player will “level up” their territory standing, granting the player access to special and permanent bonuses within that particular territory. Each level, players will be given the opportunity to choose between three different Territory Standing permanent bonuses, these potential bonuses include:

House Ownership: Upon reaching Territory Standing level 10, players will be able to select this bonus to be able to purchase a house in the settlement of that specific territory.

Players will have the freedom to allocate their standing points however they would like to. There is no ‘best perk’, and the choice should depend on how that player would like to progress through Aeternum. If a player wants to level their character faster, they will choose XP Gain. If they will be crafting heavily in one particular settlement and territory, they will choose the Station Fee bonus. Pro tip: Consider delegating specific territories for particular actions taken in-game, for example, a player may decide that they would like to store the majority of their items in one particular territory. In that case, they may decide that any time they see the Storage bonus, they will choose that, in order to make room for all of their items. In another territory they may prioritize the Station Fee bonus, designating a particular territory where they will do the majority of their crafting.. As a player, the options are limitless and with 300 territory standing levels to acquire in each zone, each player can make a territory their own. 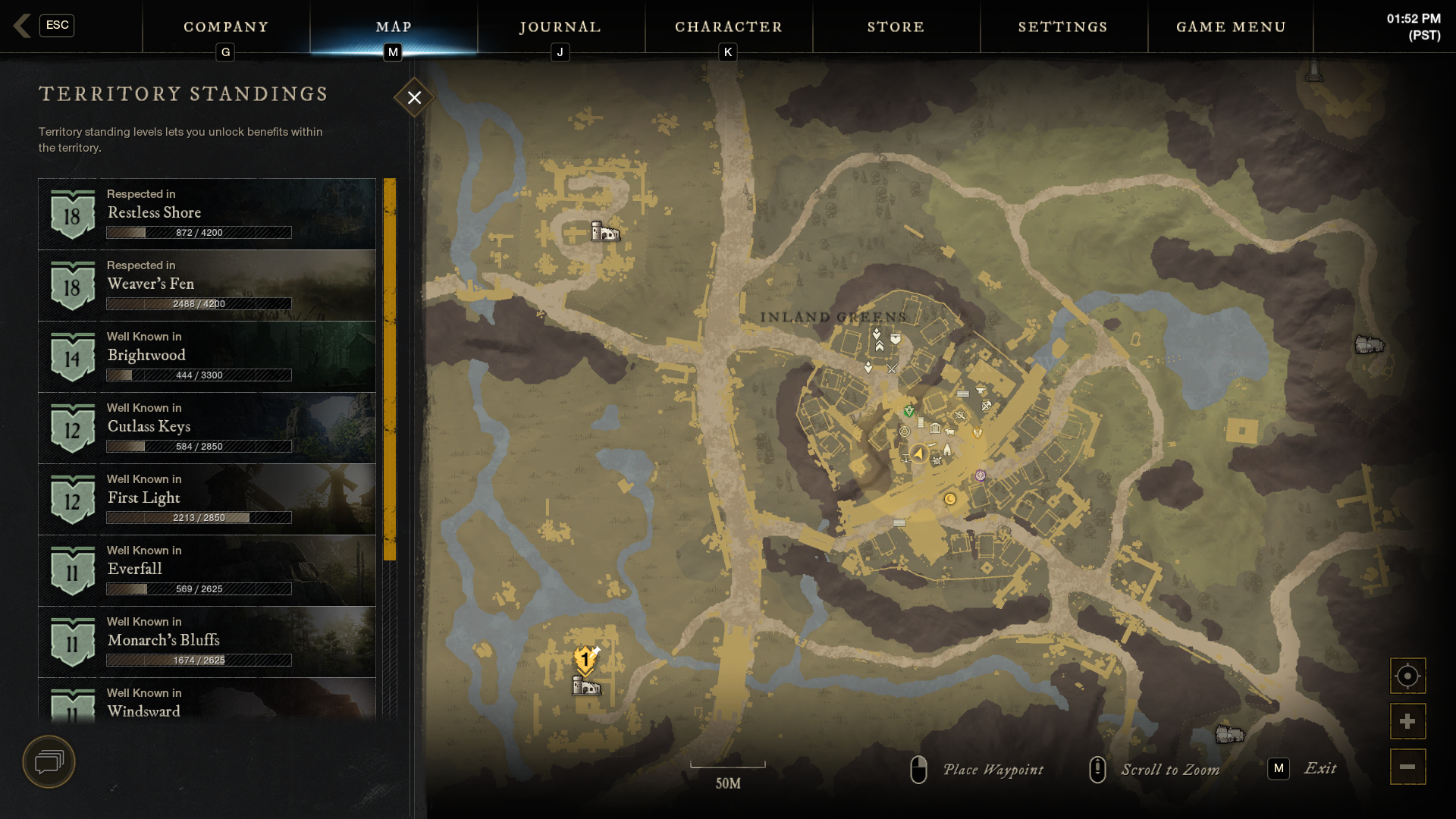 To earn Territory Standing experience, level up their territory standing,  and acquire the permanent bonuses listed above,players can do many things within the territory of interest, these actions include:

Quests: Quests will notify you when they are going to reward you with Territory Standing. Read within the rewards to see how much standing you will gain for completing it.

Town Board Quests: Town board quests give players the opportunity to assist a company in developing the settlement’s crafting stations and fort defensive capabilities. These quests also reward players with gold, character experience, territory influence and most importantly for this guide, territory standing experience.

Discovering Landmarks: Players should be looking out for any ‘?’ question marks on their maps. Discovering landmarks will give players Territory Standing experience.

Territory Standing is an integral part of the New World experience and gives players an awesome way to feel like they are making progress in their favorite zones. New World offers many different permanent bonuses that should allow players of all types to carve their own path through Aeternum.

Post Views: 4,712
We use cookies on our website to give you the most relevant experience by remembering your preferences and repeat visits. By clicking “Accept All”, you consent to the use of ALL the cookies. However, you may visit "Cookie Settings" to provide a controlled consent.
Cookie SettingsAccept All
Manage consent