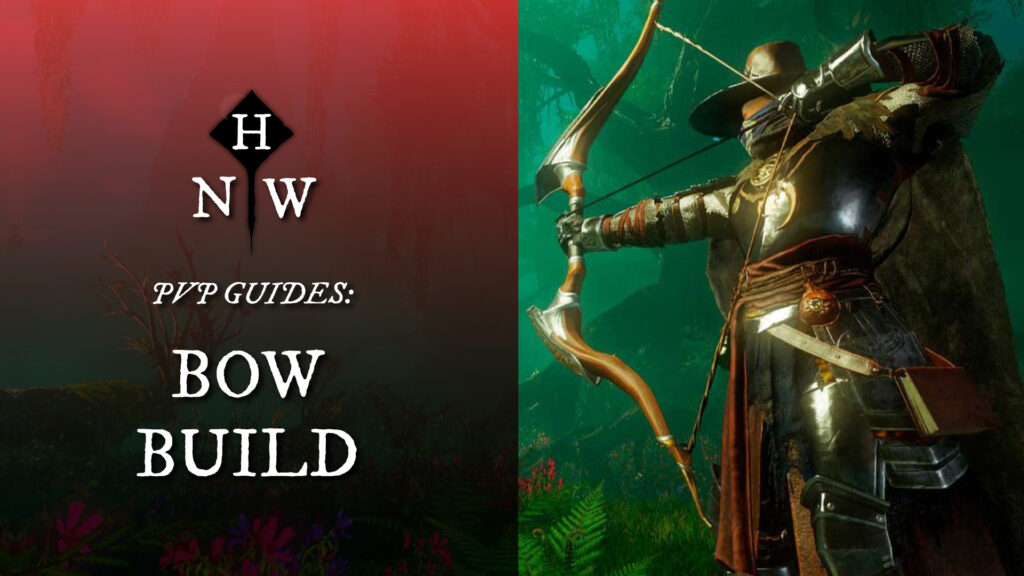 The bow in New World is an incredibly powerful ranged weapon, capable of some of the highest damage per second in the game. In PvP, the bow is exceptionally difficult to pilot because of the chaotic nature of player versus player encounters and the fact that arrows are affected by gravity and are on a projectile system rather than a hit scan system like the musket. Although difficult to wield, players will find the power level of the bow to be worth the practice. 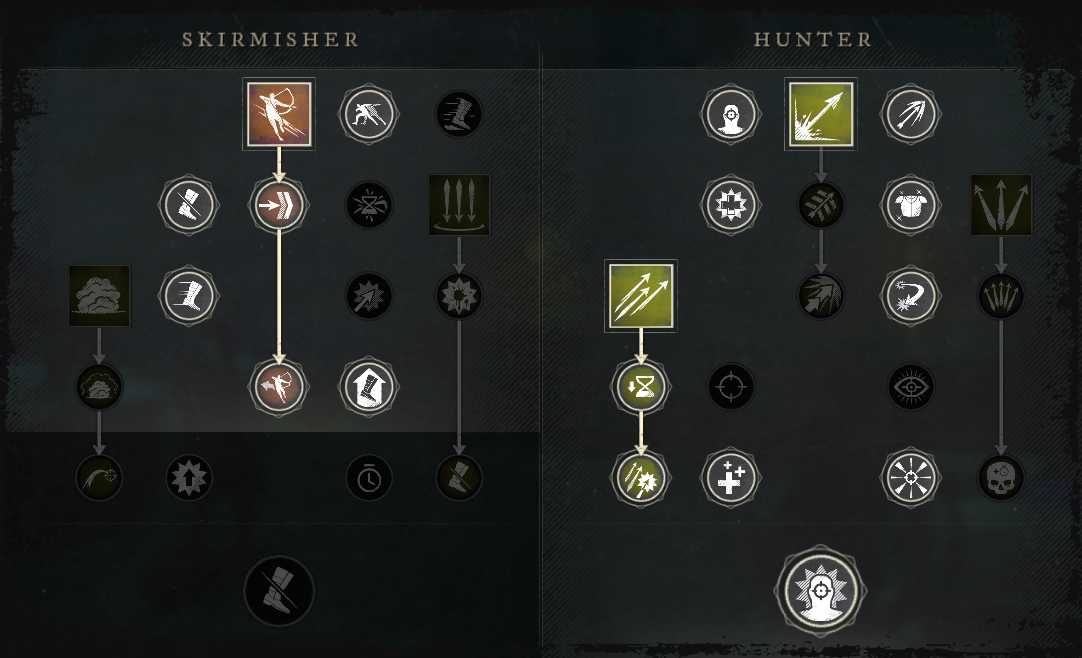 Evade Shot is the bow’s primary space-creating tool apart from its movement speed passives. With both Evasive Knockback and Go The Distance passives, Evade Shot will give the bow user a net 7 meters of created space between them and their opponent, with a 15% burst of movement speed for 5 seconds. Since the bow has no real hard crowd control effects, incorporating Evade Shot into PvP builds is almost mandatory. Because of this lack of crowd control effects, bow players will also need to have an in-depth knowledge of advanced mobility techniques if they expect to dominate other players.

Both Evasive Knockback and Go The Distance are incredible passives that should be included in most bow PvP builds. Any increase in space that a bow player can create during a PvP encounter will pay dividends towards the player’s combat endurance and success.

At first glance, Penetrating Shot doesn’t seem very good, however, with a basic knowledge of animation canceling and ability/basic attack weaving, Penetrating Shot becomes much more desirable. When used directly after a bow light or heavy attack, the burst potential quickly becomes apparent. With the ability having 150% weapon damage scaling while being on a single attribute scaling weapon, Penetrating Shot is one of the hardest hitting abilities in the game.

Due to the unruly and chaotic nature of PvP, both Blood Soaked Arrow and Deep Strike don’t make the cut in this build. Blood Soaked Arrow is only valuable when there is more than one opponent and the chances that those opponents get perfectly lined up for a collateral Penetrating Shot is far fetched. Deep Strike requires that the enemy be 20 meters away from the target to benefit from the damage amplification. This is a fairly considerable distance (2 full greataxe Charge for reference). Many PvP engagements will quickly become medium to short range, so this passive will be left unactivated in most situations.

The main damage dealing ability in the bow tool kit is Rapid Shot. With an extremely high skill cap, Rapid Shot’s potential value shoots through the roof as a player masters the ability and is able to hit 2 or 3 of the shots on average per activation in PvP.

With passive Rapid Accuracy, bow players are heavily incentivized to hit all three shots, decreasing the cooldown of the ability from 20 seconds to 10 seconds. In the hands of a highly skilled bow player, this passive will greatly increase that player’s damage potential. Final Blow also incentivizes mastery with the bow as well by offering a flat damage bonus to the 3rd and final shot of the ability. With the 3rd shot of Rapid Shot being the easiest of the 3 shots, this passive will be friendly to both new and experienced players.

The bow has one of the highest damage ceilings in the game, however, it comes with a high skill ceiling, making the weapon more advantageous for highly skilled players. With a large kiting potential due to movement speed passives like Dodge and Weave, Go The Distance, and Archer’s Speed, the bow excels in small-scale PvP situations. Bow players using this build should look to create as much space as they possibly can from their opponent since bow shots become difficult to land when the enemy is within a few meters.

If the enemy player is using a ranged weapon, the winner of the engagement will most likely be the player who hits a larger portion of their basic attacks and abilities. In this particular build, Evade Shot, Rapid Shot, and Penetrating Shot gives the bow player many more chances to hit high single-target damaging abilities, effectively enabling the bow user to advantageously trade more often. When the bow user is facing a melee weapon user, however, mobility becomes the most important aspect of the match. Skilled melee weapon users will likely try to look for ways to approach a bow user and other ranged weapon users without dodging or using gap-closing abilities. This is advantageous for these players because if they have full stamina, as well as their mobile abilities, mirroring the ranged weapon users movements is much easier.

To combat these techniques, bow users will need to play particularly well, looking for every opportunity to gain a movement advantage over their opponents. Some tips to help complete this objective:

Maximize dodge movement potential with passives like Hearty and Nimble. If the bow player has 109.5 total stamina (after Hearty bonus) and each dodge takes 40 stamina (with 150 Dexterity attribute bonus), a player can dodge twice (leaving the player at 39.5 stamina), wait a fraction of a second for stamina to regenerate to 41, then dodge twice more for a total of 4 dodges. Many players won’t have the correct build for this type of movement and a limited number of opponents will be running 150 Dexterity to take advantage of the dodge stamina reduction bonus. 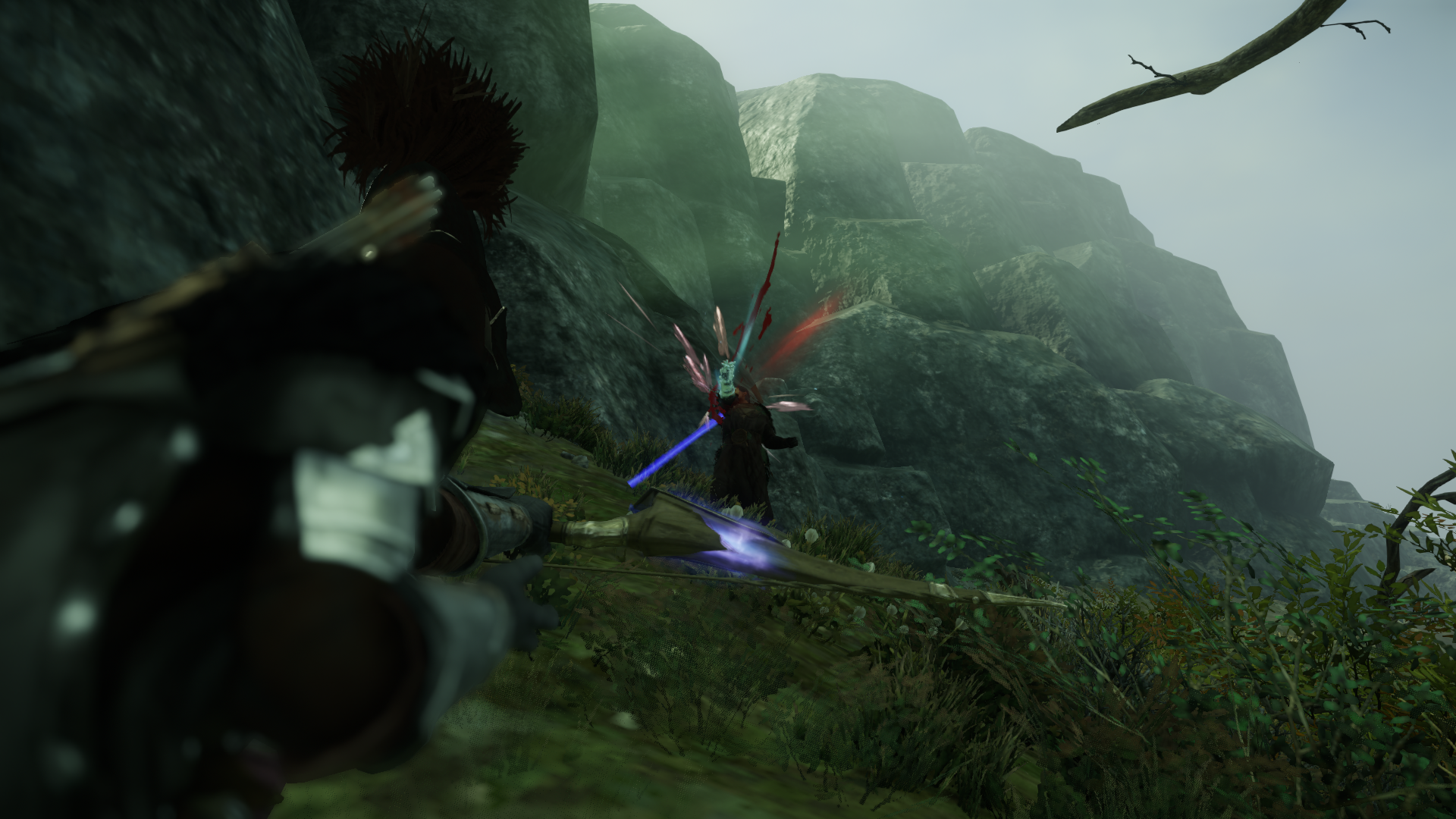 The bow fully scales off of the Dexterity attribute at 1.0X. This means that for every point that a player puts into Dexterity, the bow will gain 1 full weapon damage. In a 500 attribute total build, the recommended attribute distribution is:

The bow fully scales off of Dexterity, so placing 300 points into the attribute is a no-brainer. Each of the Dexterity attribute bonuses have high value in this build apart from the 250 Dexterity bonus, since we won’t have any stuns, slows or roots in this build and we can’t add any of these effects via weapon ability perks. Because the bow has an impressive kiting tool kit, 350 or even 400 Dexterity could be viable if the bow is paired with another space-creating weapon like the sword, spear, warhammer, etc.

Penetrating Rapid Shot is the stand-out weapon ability perk in this line up. While Energizing Evade Shot sounds decent on paper, the amount of stamina micromanaging that a player would need to do to make the perk viable most likely outweighs the benefits. Penetrating Rapid Shot on the other hand is a passive perk that only relies on the bow player hitting the last shot of Rapid Shot which is generally the easiest shot in the 3 arrow burst. In a meta dominated mainly by heavy armor, Penetrating Rapid Shot could flourish quite well.

Post Views: 31,529
We use cookies on our website to give you the most relevant experience by remembering your preferences and repeat visits. By clicking “Accept All”, you consent to the use of ALL the cookies. However, you may visit "Cookie Settings" to provide a controlled consent.
Cookie SettingsAccept All
Manage consent