The Ice Gauntlet in New World is the most oppressive and versatile weapon in the game, excelling in area of effect damage, crowd control, and utility. The sheer damage that Ice Storm brings alone is enough to stop a player in their tracks, especially when correctly lined up with the Heavy Freeze and Critical Frost passives. The Ice Gauntlet is a behemoth of a weapon in not only 50v50 instanced wars, but small and large-scale open world PvP. 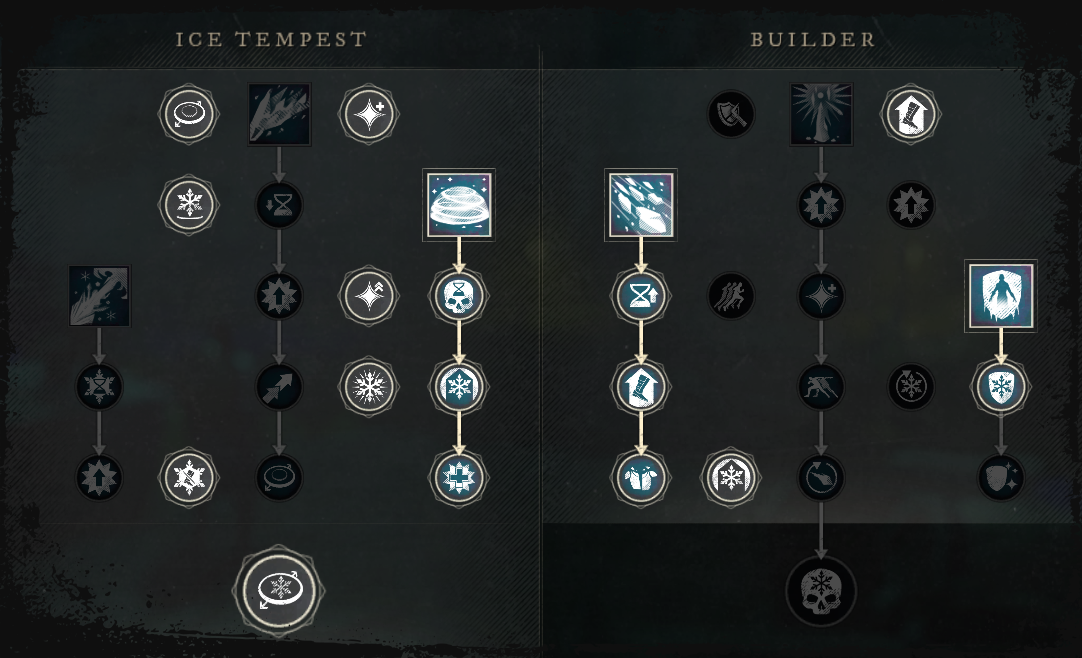 Ice Storm is the epitome of the ice gauntlet, and the ability that, due to the synergy that some passives provide, creates the specific playstyle that this weapon requires. This ability creates a globe-shaped storm that deals AoE damage and slows enemies that are within it, and increases to immense power when it’s passives are taken.

The Ice Storm passives turn it into the damage machine that it’s known for, Punishing Storm being the fuel. A 10% damage multiplier per player inside the storm gives any ice gauntlet player a reason to get to the back line of territory war to cause havoc. The worth is far greater than the risk because of the sheer damage that this multiplier provides. Combined with Weakening Gust, this ability becomes a force to reckon with. Storm Summoner provides a small amount of mana management, but is primarily taken just to get down to Punishing Storm.

Ice Shower provides relentless oppression and top-tier control that the ice gauntlet is known for, causing Frostbite, slowing enemies and preventing them from sprinting and dodging when hit. When cast, this ability is laid out in a straight line in front of the caster, but can be warped to create a half-circle when turning the mouse while casting to create a wider field of impact.

Entombed is arguably the most effective defensive ability in the game, granting immunity to damage for 10 seconds or until the tomb is broken. The tomb has a hefty amount of health and is not destroyed easily, securing at least a few seconds of invulnerability. Entombed also provides a steady rate of mana, making it a multi-purpose ability for either defense, mana regen,

The 25% defense buff that Strengthened Tomb provides after breaking out of Entombed is fantastic when being overrun by a number of players, and has the potential to prevent a significant amount of damage.

This ice gauntlet build provides all of the tools that the player needs to succeed in solo-play, large-scale play, and 50v50 territory wars. The success of the build does not come only from the build, however, but the player as well. Mastering movement is just as important as mastering the weapon itself, and should be respected in that manner. The damage output is nearly unmatched when played correctly, and only then, the player can become the hand of icy death.

Utilizing heavy attacks at the correct time is incredibly important, and is vital for the ice gauntlet to reach its maximum damage output. The Critical Frost and Heavy Freeze passives are the bread and butter of this build – respectively, an increased 20% critical strike chance, and heavy attacks freezing for 1 second, both against enemies inside Ice Storm or Ice Shower. At a close enough range against the target, Heavy Freeze has the ability to stun-lock an enemy for a duration, allowing roughly 3 to 5 heavy attacks against the target, all with a 20% increased critical strike chance. This, combined with the Ultimate Chill passive, provides a high amount of damage against targets hit by any of your abilities. Ice Storm and Ice Shower provide the set up, while Critical Frost and Heavy Freeze provide the damage and CC. This is crucial for the ice gauntlet user to understand, as ice storm and ice shower provide those short windows of opportunity for high damage output. Heavy attack precision is key here, and every shot matters.

Entombed provides the user with utility in the form of defense or aggression – immunity and cooldown reduction defensively, or AoE damage while breaking out offensively. The damage that Entombed causes is significant and can be used after dodging toward an enemy player, casting Entombed, and breaking out of it to finish off the enemy player. This ability provides great use for the user in a number of different situations, but because of its long cooldown, should be used wisely. Entombed allows the user to put themselves in extremely high-risk situations while having something to fall back on, allowing for high-risk high-reward plays in both small-scale and large-scale PvP. Pushing to the back line of a 50v50 territory war and disrupting the chain of events of the enemy teams healers and ranged players has a large effect on the outcome of a war. When the ice gauntlet player has gotten comfortable enough to do this efficiently and effectively, they will then begin to understand the potential of Entombed.

Here are some quick tips to get started: 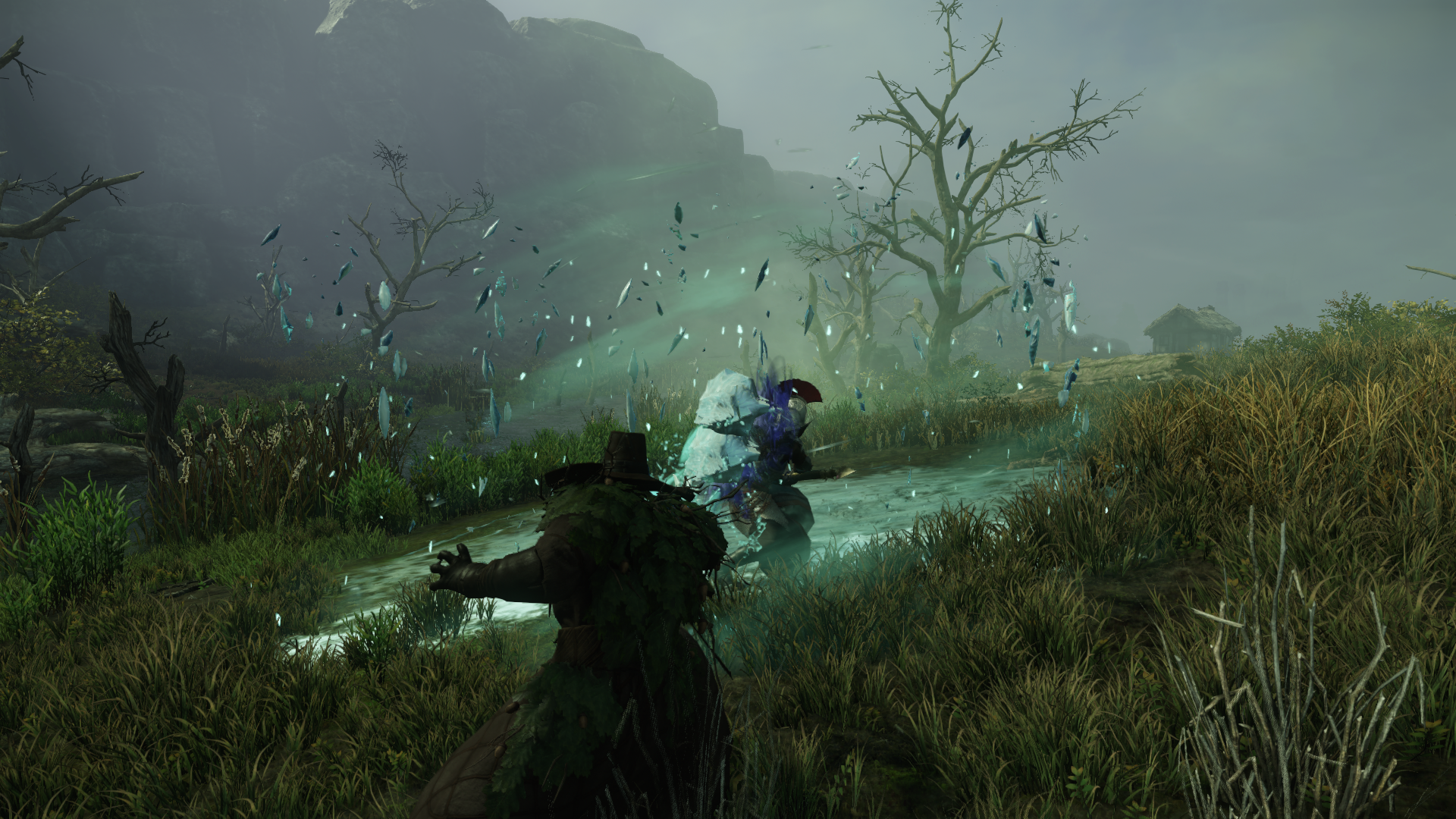 The ice gauntlet primarily scales off of the Intelligence attribute at 1.0X. This means that for every point in intelligence, the ice gauntlet will gain 1.0 weapon damage. The ice gauntlet is a ranged weapon that has the ability to prevent a significant amount of damage that is coming at the player, so intelligence is a higher priority than constitution. However, the player’s movement is imperative to avoiding damage, and the player cannot rely only on the utility of the ice gauntlet (refer to our Advanced Mechanics guide). Reaching 200 constitution is necessary, however, and will provide an abundance of defensive bonuses. In a 500 attribute total build, the recommended attribute distribution is:

Reduced all ice cooldowns by 20% on a killing blow.

Compared to the majority of the weapon ability perks in the game, the ice gauntlet perks are in a good place. Every one of these perks would have their use in a certain situation, Iced Refresh excelling in 50v50 territory wars and large-scale open world PvP. 20% instant cooldown reduction is fantastic, but only occurring on killing blows makes it challenging to get full use out of. When dropping an Ice Storm in a group of 10+ enemy players, it’s probable that you will get at least 1 or 2 killing blows, making it so, at the very top-end, you can stack multiple Ice Storms on top of eachother. Healing Tomb has its place, and the user would find great use of it if they were having a hard time surviving after coming out of Entombed. Frost effects remaining on enemies for 2 seconds after exiting Ice Storm make Unending Thaw an incredibly strong perk because of the line-ups of chain CC that the Heavy Freeze passive provides, and gives the player a bit of forgiveness if they miss their heavy attacks on the enemy player inside the storm.

Post Views: 17,894
We use cookies on our website to give you the most relevant experience by remembering your preferences and repeat visits. By clicking “Accept All”, you consent to the use of ALL the cookies. However, you may visit "Cookie Settings" to provide a controlled consent.
Cookie SettingsAccept All
Manage consent