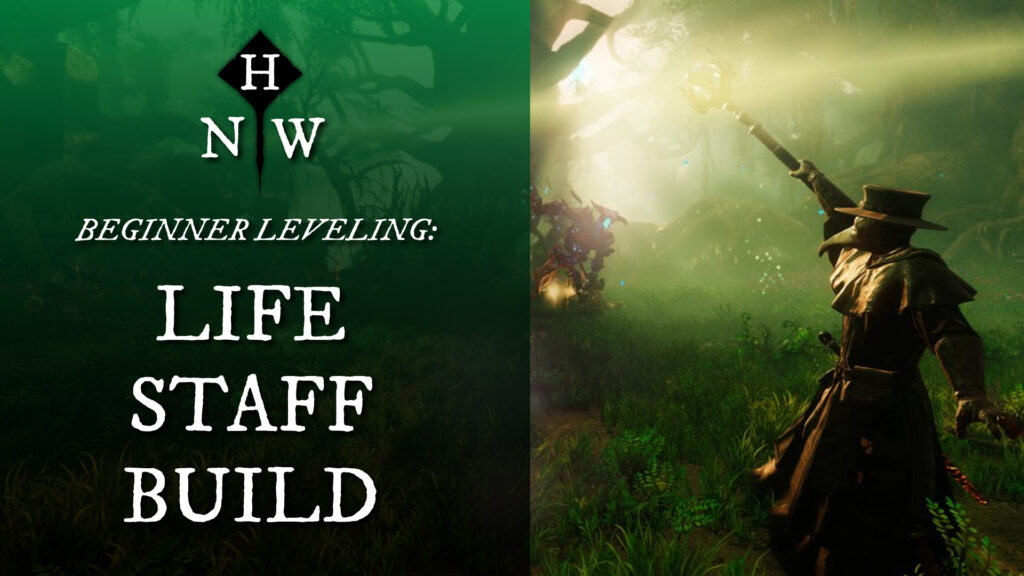 The life staff in New World is an incredible weapon that gives players the opportunity to become more self-sustainable and altruistic on their journey through Aeternum byway of healing themselves, allies, and friends. The life staff is the only weapon that is able to heal another player and is a fantastic weapon to use while leveling because of the efficiency that it provides, and the desirability that it gives to players that wield the life staff for expedition and other forms of difficult group content.

Holy Ground and Blessed  are extremely valuable passives to take in this build. Life staff players should note that passive Blessed only affects their teammates. This ability was taken to ensure that players that venture into expeditions or adventuring with one or more friends are taken care of.

Orb of Protection is used in this build to allow the life staff user to buff their teammates while questing or delving in an expedition, however its real purpose is to allow the life staff user to pull monsters effectively and quickly deal significant damage before they swap to their secondary weapon. When used this way, Orb of Protection should speed up leveling and questing by a decent margin.

Since Orb of Protection will mainly be used to pull enemies, a lot of the passives that the ability offers were left out of this particular build. Protector’s Blessing (12) makes the cut later in the weapon progression due to the value it can provide in more difficult group content.

Beacon (4), similar to Sacred Ground (3), stays active after a weapon swap. This means that a life staff player should use the ability prior to a weapon swap in order to maximize the value generated. With both Sacred Ground (3) and Beacon (4) down at the same time, life staff players should have no problems  staying topped up, even while fighting some of Aeternum’s toughest monsters.

Both Infused Light (5) and Radiance’s Blessing (6) give Beacon (4) the utility that it needs to function well alongside Sacred Ground (3). With both passives, it should help players stay within both healing abilities easily and both abilities will have the same active duration.

The life staff is not a damage dealing weapon by any means and should not be used for dealing damage in this particular build. Life staff users should pick a strong secondary weapon that is competent for leveling on its own and should always keep that secondary weapon socketed with an Amber Gem as much as they possibly can since this build will dumb attribute points into focus rather than a stat that the damage dealing weapon with scale with. Amber Gems will allow the secondary weapon to have a portion of its weapon damage scale off of focus, allowing life staff players to have the best of both worlds.

One of the big reasons why the life staff can function as an extremely powerful leveling weapon is the fact that the AoE heals Sacred Ground (3) and Beacon (4) both persist through weapon swaps, allowing both healing abilities to stay active while the player switches to their secondary damage dealing weapon. This means that the player can in theory, use the life staff and secondary weapon at the same time. A task that most weapons in New World cannot perform. In order to maximize the value that a player is generating from the life staff, a simple rotation should be performed before and while pulling a monster.

It is important to note that Orb of Protection (2) should be used immediately after the heavy attack is cast in order to animation cancel the recovery animation. If the rotation is performed properly and the life staff player can stay within the confines of the AoE healing abilities that they put down for themselves, the player should have no problem defeating most, if not all of the leveling content in New World by themselves (outside of expeditions). For many of the earlier dungeons like Amrine Excavation and Starstone Barrows, the life staff user will be able to heal their expedition party without issue, especially when the abilities are paired with light attack heals generated from the passive Blissful Touch (16) 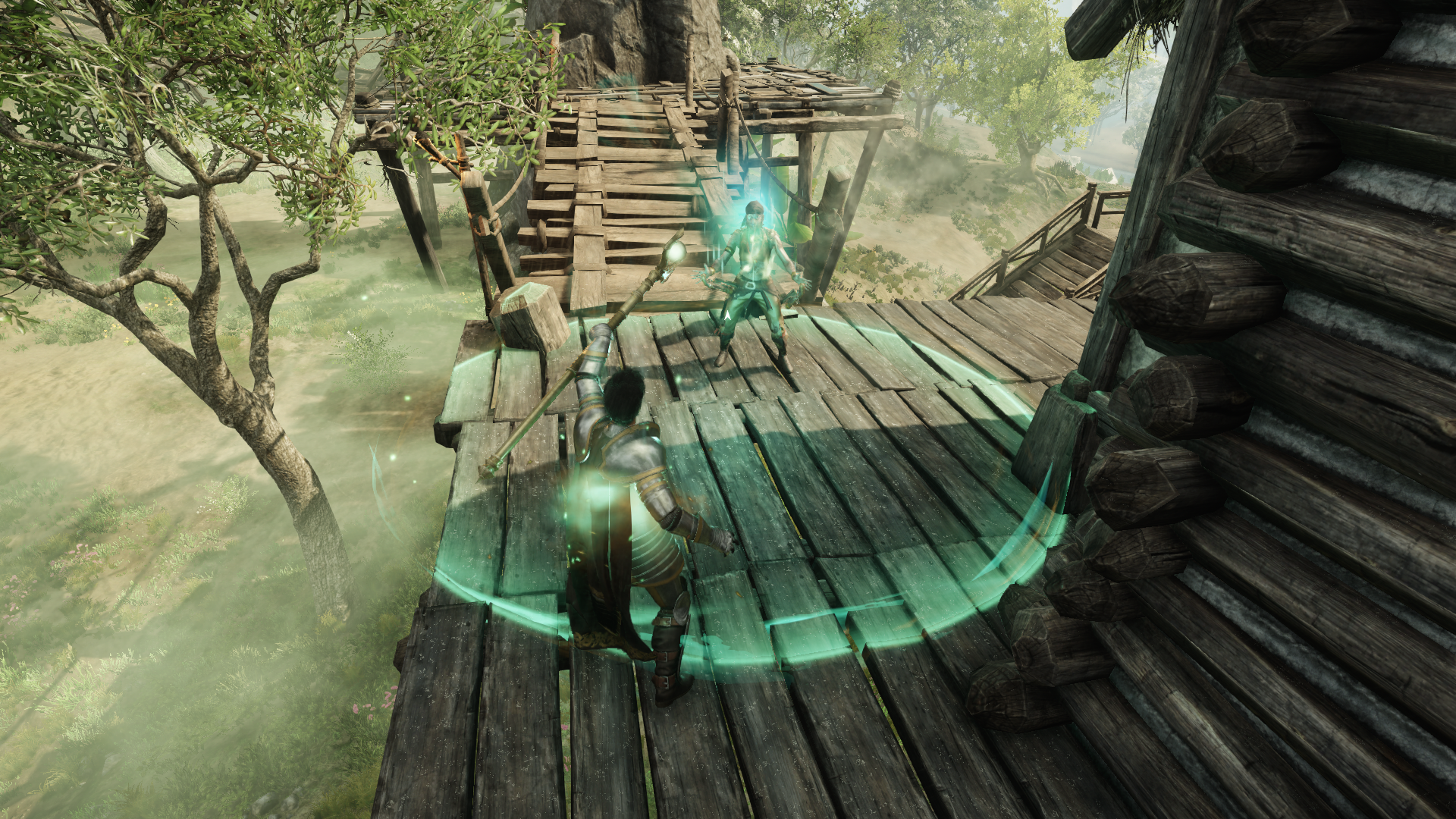 The life staff fully scales with the Focus attribute at 1.0X. This means that for every point that a player puts into Focus, the life staff will gain 1 full weapon damage.

The Focus attribute has some of the best leveling perks relative to any other weapon that New World has to offer.The most important Attribute Threshold Bonuses are listed below:

Getting to both 150 Focus and 50 Constitution as quickly as possible is important for getting off to a good start with the life staff. 50 Constitution is valuable early on because it reduces the amount of consumables that a player will need to use by a significant amount (this includes mana potions). 150 Focus should be a goal that is met as quickly as possible for a life staff player due to the intense flat 20% healing bonus they will receive as soon as they cross the threshold. This 20% healing amplification will affect both Sacred Ground (3) and Beacon (4) and will persist through a weapon swap.

Increase healing power by X% for 5 seconds if Orb of Protection heals an ally with no active buffs.

Using Beacon increases healing power on self by X% for 12 seconds.

Revitalizing Beacon stands out in the weapon ability perk category for leveling. While questing and adventuring through Aeternum, life staff players will be constantly healing themselves after taking damage from enemies. With an ability perk like Revitalizing Beacon, life staff users will have much heartier heals on themselves, and will be able to stand and fight difficult foes with more confidence that they will live through the encounter. Fortifying Sacred Ground is also a decent passive for leveling since many players will be standing in Sacred Ground (3) while fighting.

Post Views: 27,411
We use cookies on our website to give you the most relevant experience by remembering your preferences and repeat visits. By clicking “Accept All”, you consent to the use of ALL the cookies. However, you may visit "Cookie Settings" to provide a controlled consent.
Cookie SettingsAccept All
Manage consent