The tankiness of the sword and shield paired with passives that improve light and heavy attack damage like Leadership (13) or Final Blow (15), and abilities that can help a player fight elite enemies like Shield Bash (7), the sword makes for a great tool for leveling. Along with excelling at solo leveling, sword users can expect an easy transition into tanking if they so desire, making finding groups for expeditions much easier. 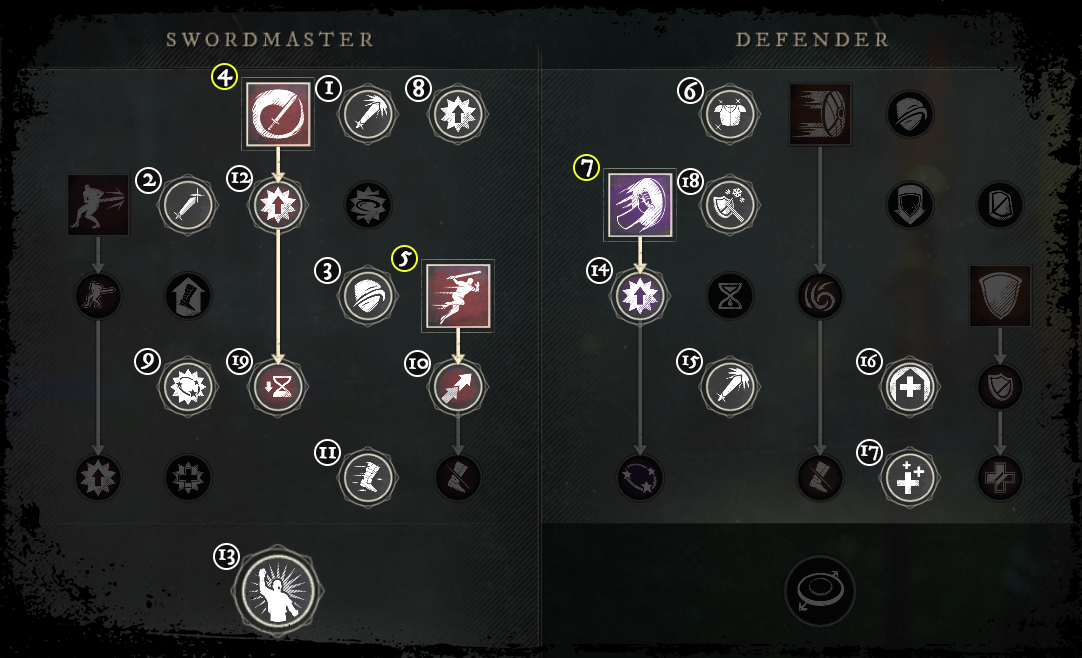 Whirling Blade (4) is a fantastic ability for leveling because of its relatively high damage scaling (145% weapon damage), and forgiving AoE attack pattern. Whirling Blade (4) will be most effective after a sword user has pulled multiple monsters, dealing damage to all enemies at once. Passives Opportunity (12) and Tactical Strike (19) add some additional value to the attack and can make subsequent attacks a bit stronger.

Both Opportunity (12) and Tactical Strike (19) offer decent value, however, the added bonuses are weak relative to other passives in the sword tree. For that reason, both are taken much later in progression. After Opportunity (12) is taken, sword players should look to use Whirling Blade (4) soon after combat starts to take advantage of the additional 5% damage that the rend provides.

Leaping Strike (5) is a very powerful ability that serves as both a damage dealer (especially after taking Final Strike (10), and gap-closer. Sword players should use this ability to animation cancel light and heavy attacks and should look to use the ability when an enemy is under 30% health to take advantage of Final Strike (10).

Final Strike (10) is viable because of the amount of damage amplification it provides to Leaping Strike (5). An additional 50% damage on top of an already high weapon damage scaling ability (135%) makes Final Strike (10) a go-to passive half-way through weapon progression.

Leveling in New World can get difficult at times, especially when a sword player is faced with taking down elite monsters. To combat more aggressive and grueling monsters, Shield Bash (7) is taken in this build. When used properly, Shield Bash (7) can be used to create space, giving the sword player some time to regenerate health through consumables or swap to a different weapon. Shield Bash (7) can also function as a way to score some serious backstab damage on a monster by stunning and simply moving or dodging behind the monster and performing a heavy attack to their backside. With passive Intimidating Bash (14), Shield Bash (7) becomes more than just a piece of utility, and deals a significant amount of damage.

Intimidating Bash (14) is a great passive to increase the overall damage of the sword and shield. However, it is not crucial to the build and for that reason it is taken a bit later in weapon progression.

The sword and shield stands out from other weapons in terms of leveling due to its aptitude for damage mitigation. To efficiently journey through Aeternum, a leveling player should look to limit the amount of time spent waiting for health to regenerate and abilities to come off of cooldown by blocking a majority of incoming monster attacks. With passives like Sturdy Shield (6), Fortitude (16), and Recuperation (17), sword players will find themselves questing for much longer without the need to stop and rest. Sword players will also find that Leadership (13) impacts leveling speed a bit more than meets the eye and will give accompanying players the same benefit.

When engaging monsters, sword users should look to block as many attacks as they possibly can. To deal the most damage possible outside of blocking windows, a sword player should use a moveset similar to this:

The first attack a sword player should use is a heavy attack that will empower subsequent attacks with 30% extra damage from Empowered Stab (1). Following the heavy attack with a Whirling Blade (4) will deal significant damage and apply a 5% rend, further amplifying the damage of the next attacks. Generally, a monster will begin its first attack on the player at this time. A sword user should block the attack, activating Counter Attack (3) giving subsequent attacks an additional 10% damage. A full light attack chain (3 attacks) should follow the block, amplified by the previous attacks and benefiting from Achilles Heel (8) and Final Blow (15). Leaping Strike (5) will follow the light attack chain, canceling the recovery animation of the 3rd and final light attack. If the monsters are more difficult than normal, the sword user can perform a Shield Bash (7), stunning the enemy and giving the player an opportunity to move to the back side of the enemy for another heavy attack. 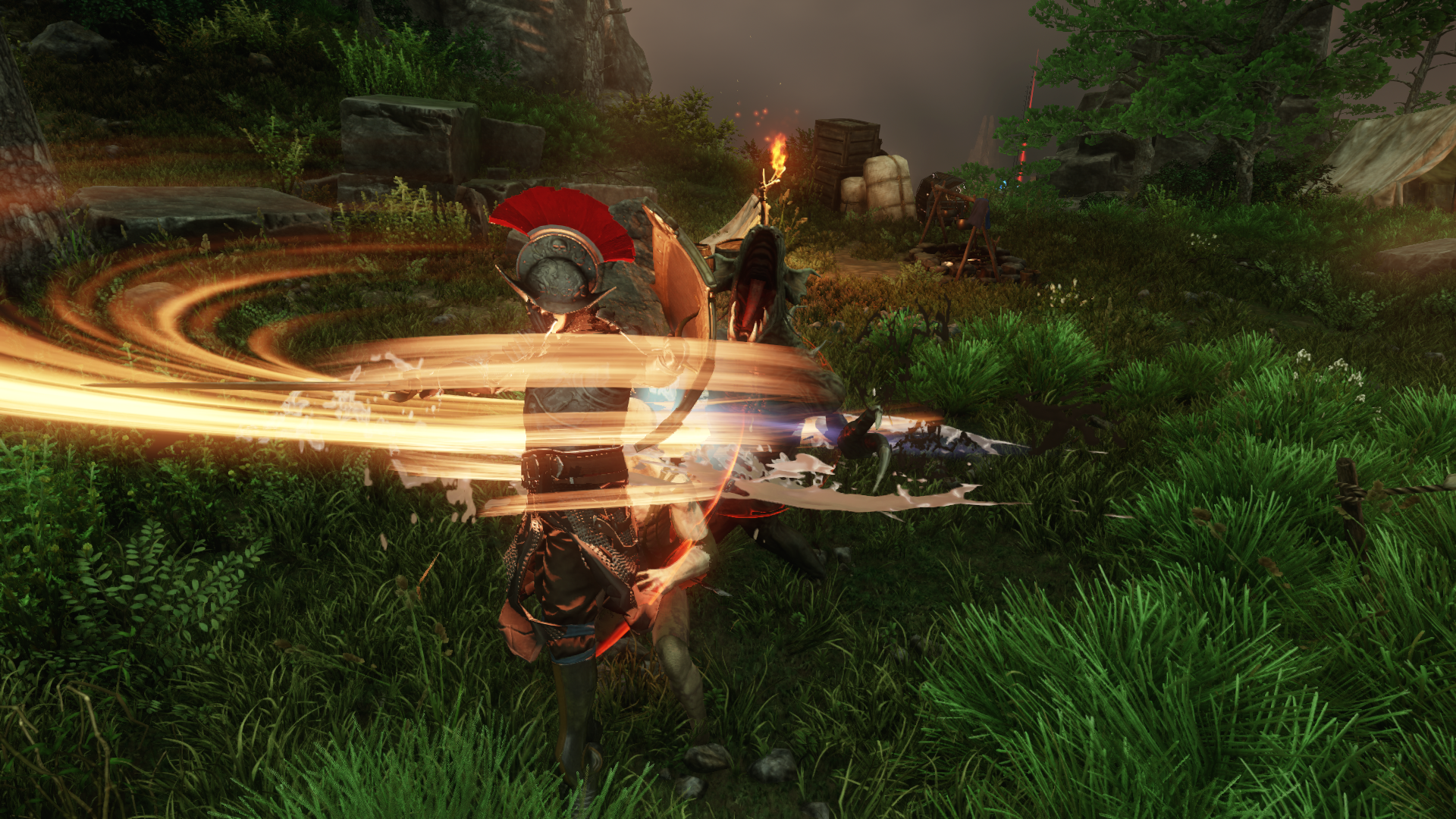 Getting to both 50 Strength and 50 Constitution as quickly as possible is important for getting off to a good start with almost any Strength-based melee weapon. 50 Constitution is valuable early on because it reduces the amount of consumables that a player will need to use by a significant amount. Light and heavy attacks serve to provide a majority of the damage that this build dishes out, so 50 Strength will give players a small boost in leveling speed and performance.

Base damage is increased by X% while performing a Whirling Blade attack if 3 or more enemies are within the radius of the attack.

Post Views: 18,917
We use cookies on our website to give you the most relevant experience by remembering your preferences and repeat visits. By clicking “Accept All”, you consent to the use of ALL the cookies. However, you may visit "Cookie Settings" to provide a controlled consent.
Cookie SettingsAccept All
Manage consent